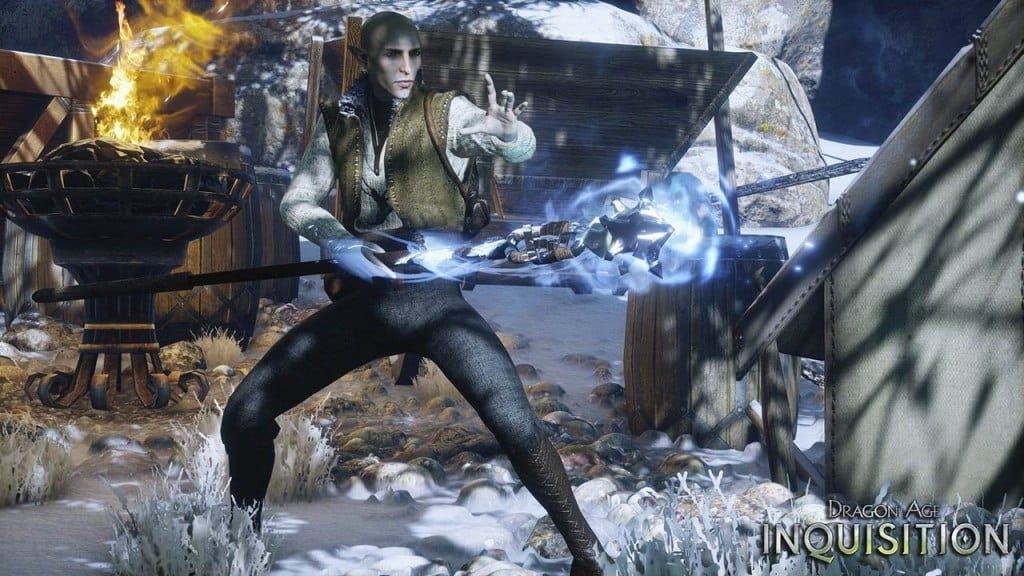 There are a total of 23 side-quests in the Emerald Graves. It is recommended that your character be, at least, somewhere between Level-14 to Level-20. Below, I have provided a brief overview of every side-quest in this region.

You need to set up four camps in the Emerald Graves. The idea is to fast travel most of the times so that you do not have to deal with monsters lurking in the forests.

Devotion
Giver: A letter near the Andraste’s Light Landmark
Rewards: 242 XP and 80 influence

This is a simple side-quest in which you are required to get to a shrine and perform a ritual. There are no major difficulties in this mission.

He has some crucial information on the Freeman of the Dales. Inside the cave, you will find all the information you need sitting on a table. Go through this Intel to know all about Sister Costeau.

Please refer to our Treasure Map and Treasure Locations Guide for more information!

The path from the Watcher’s Reach to the veridium’s mine is patrolled by Freemen. While you are dealing with them, make sure to look out for scouts in the area. The mine’s front entrance is also protected by three swordsmen and a guardsmen.

Before facing Sister Costeau, you will have to deal with a swordsman and some snipers. Costeau is equipped with a heavy shield and a damaging mace. Get your tanks keep her busy and try to flank her from behind.

Once you have defeated her, check the area for some captives and loot before heading out.

Not Everyone’s Free
Giver: A captive in the veridium mine
Rewards: 242 XP and 80 influence

This is a small follow-up side-quest of A Fallen Sister. All you need to do is to find a key and free the prisoners in the area.

In this side-quest, you need to kill Duhaime which can be found in the Villa Maurel. This man runs with a small battalion and is an extremely capable fighter. He is equipped with a two-handed axe and should not pose a major threat with his party gone.

After acquiring the key from Duhaime, head inside the Villa Maurel where you will have to deal with a Freemen General.

In this side-quest, you need to head inside Villa Maurel in order to find three key fragments. Once you have found all key fragments, you need join all these fragments and assemble the key followed by using the key.

In order to use this key, you need to head inside the door across your personal storeroom.

A Deluded Chevalier
Giver: sister Costeau’s note in the veridium mine
Rewards: 967 XP, 200 influence, and 2 power

You need to approach Argon’s Lodge from the north side where you will find a small settlement of Freemen.

You need to clear as many troops as you can before moving ahead. Eventually, you will come across Chevalier Auguste with different types of enemies including snipers and bruisers.

The idea is to take out snipers as soon as possible. You need to use your Mage’s focus ability Heal and defeat Chevalier Auguste to complete this side-quest.

After you have defeated Chevalier Auguste, you need to return to Fairbanks in Watcher’s Reach and complete this simple side-quest.

In order to acquire this side-quest, you are required to complete A Fallen Sister, Not Everyone’s Free, A Vicious Thug, A Corrupt General, and a Deluded Chevalier.

You need to head over to Argon’s Lodge and meet with a woman named Clara who has something to say about Fairbanks. After speaking to Clara, head north to come across a small wooden shack which contains a proof you are looking for.

Other pieces of proof can be found in storage houses near Villa Maurel. Once you have acquired proof, you will be faced with a choice.

Make your choice and complete this simple side-quest.

Fairbanks Patrol under Attack
Giver: Witness a patrol under attack by the Freemen
Rewards: 242 XP and 80 influence

You will randomly come across Fairbank’s patrol under attack by Freemen warriors. As soon as you see this happening, the quest will initiate. This will happen multiple times during your journey and your task is to protect Fairbanks’ men.

You need to head towards Silverspray Perch overlooking the Silver Fall. Scan the nearby area and you will stumble upon a journal containing critical information about the dead women and her family. After learning about the cause of woman’s death, this mission will be completed.

A Lover’s Promise
Giver: A letter found on wall at the Lion’s Pavilion
Rewards: 242 XP and 80 influence

You need to head over towards north side of the camp in Gracevine. Once you get there, you need to investigate the picnic blanket nearby. In case you are at Level-15, you will have to defeat a giant spider in this area.

All you need to do is to visit this area which will complete this mission.

A Bear to Cross
Giver: Johnson
Rewards: 242 XP and 80 influence

In this side-quest, you are required to take out a bear. Head over towards the northeast corner of the Andruil’s Wall Camp to find this bear inside a cavern.

Have your tank stay in the front line and initiate the fight. This bear has an insanely high damage output and is capable of defeating a poorly equipped character with a single attack.

I would highly recommend using fire-damage to take out this bear quickly and completing this side-quest.

Observing the Menace
Giver: A journal of Troilus found in the south side of the Gracevine Camp
Rewards: 242 XP and 80 influence

After acquiring the journal, head towards the north side to the first campsite.

There is a Fade Rift nearby, so I would recommend avoiding the demons in order to make it a tad easier. After acquiring the first journal, you need to head over towards the east side where you will the second journal.

While finding the second journal, Troilus will insist on closing a Fade Rift which will go astray. Help him close the Fade Rift and complete this side-quest.

Map of Elgar’nan’s Bastion
Giver: A scroll found near the Gracevine Camp
Rewards: 242 XP and 80 influence

Please refer to our Treasure Map and Treasure Locations Guide for more information!

Last Wishes
Giver: A random note found near an Urn of Ashes
Rewards: 242 XP and 80 influence

After acquiring this side-quest, you need to travel towards the northernmost side of the Emerald Graves – in order to scattered Robert’s Ashes.

There are quite a lot of Red Templars/Mages in the area near the Southfinger Watch. You can go through this area without any difficulty, but there are chances that some enemies will spot you.

After getting to the designated position, scatter Robert’s Ashes to complete this simple side-quest.

Your task in this side-quest is to defeat Carroll.

Leliana will help you track down Carroll. After getting to the designated location, you will see that two Red Templars are accompanying Carroll. Use any Mage or Rogue set up some traps on pavilion’s stairs.

Once you have killed Carroll and all her accomplices, the side-quest will complete.

After getting to Elgar’nan’s Bastion in the Emerald Graves, you will come across a small group of Dalish Elves investigating Din’an Hanin’s tomb. They will not let the Inquisition squad pass through without some resistance.

The idea is to dispatch some soldiers to this area via the War Table, especially after the events of Halamshiral. If you arrive at this area after the War Table operation, you will find the tomb unguarded with your own and Dalish soldiers left unguarded.

We have compiled a separate guide on how to kill all High Dragons in Dragon Age: Inquisition.