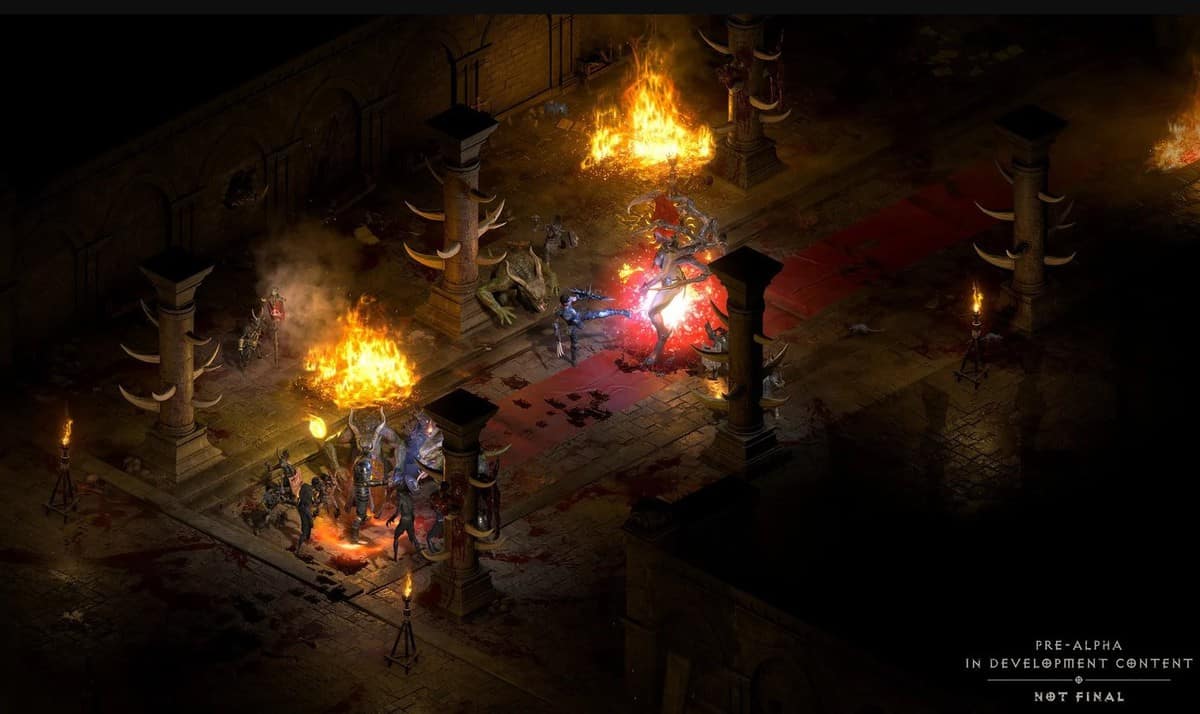 In this guide, we will show you the Diablo 2 Resurrected Fireball Sorceress Build, along with where to spend the attributes points, what gear to choose, what skills to choose, and much more.

Sorceress is one of the most deadly but fragile characters in the game. The Sorceress is known for her ability to use Ice, Lightning, and Fire in her favor.

This makes for a variety of playstyles for the Sorceress Class, and you can easily choose to alternate between different elements; like the Blizzard Sorceress, or the Frozen Orb Build.

Fire Sorceress is a must-have character at the beginning of the game when the monsters are not that deadly and fire immune. It really helps in leveling the Sorceress relatively easily.

Once you get past the early stages of the game, you will face more of the Fire Immune monsters that will be a menace to you.

Fireball Sorceress build can also be used in the later stages of the game in some places where the monsters are not immune to fire attacks.

With the help of our Fireball Sorceress build, you will be able to fly past the early stages of the game by only using low-level items. You can also check out our other Sorceress Builds!

Instead of investing that many points in Dexterity and Energy, we will use most of the stat points in Strength and the remaining on Vitality.

These are the main skills that you need to focus on and invest more points in before you move on to another skill. The Fireball skill creates a fiery explosion that you can throw at the enemies.

On the other hand, Meteor skill summons fiery meteors from the sky and crushes any enemies that come in its range.

The second skill that we will max out is the Fire Bolt skill that creates a flaming missile and explodes at the targeted enemies.

Warmth increases the rate of your mana regeneration. Since most of your attacks consume mana, we will use Warmth to reduce the time it takes mana to regenerate.

Fire Mastery (As much as you can)

Fire Mastery is a crucial skill that increases the fire damage that you inflict on the enemies.

Invest as many skill points as you can on this skill.

Allows you to instantly teleport towards the targeted location.

Allows you to move items using your brainpower. You can use this skill to pick up objects, knock back enemies, use traps, and more.

Reduces the life of the nearby enemies by creating a static field around them.

For the helmet, we will choose Nadir.

Our weapon of choice for this build is Leaf.

We have chosen Spirit as our shield for this build.

The Stealth armor is one of the most used armors for the Sorceress class and we have chosen it again for this build.

For the belt, we have chosen the Lenymo belt.

Gorefoot boot is our boots of choice for this build.

The ring of choice for our build is the Dwarf Star.

For the amulet, The Mahim-Oak Curio caught our attention.