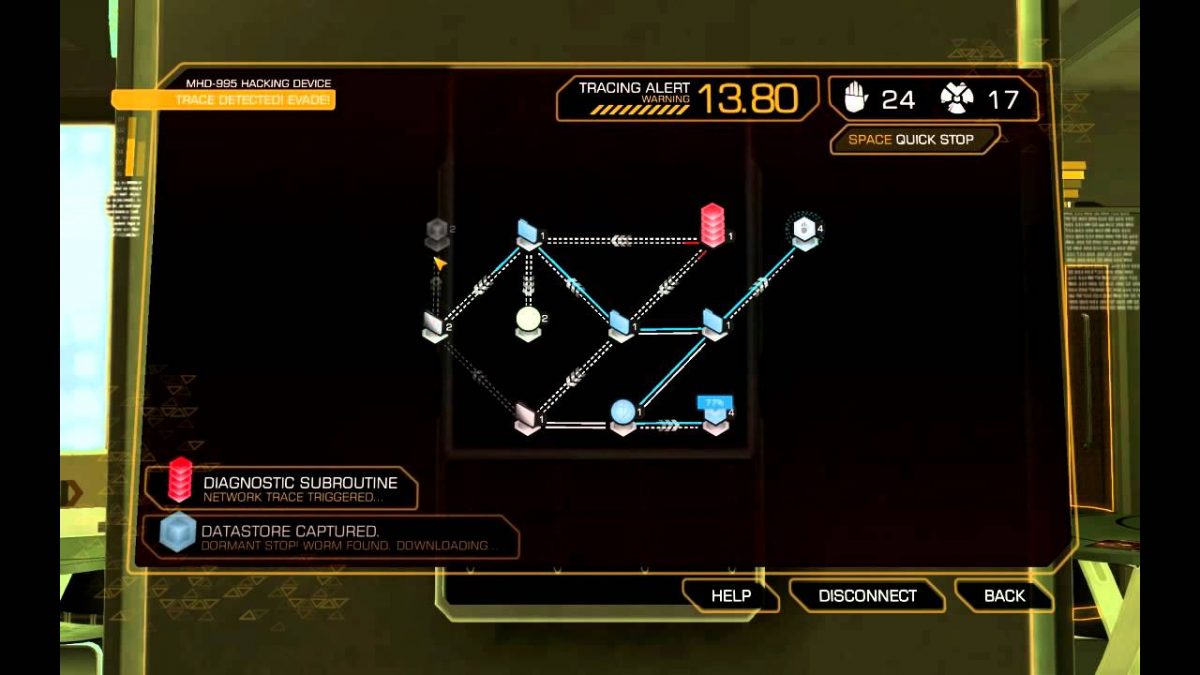 Hacking is an important aspect of Deus Ex Human Revolution gameplay since you will come across several locked computers and electronic devices in the game that you need to get access to. It will help Adam to get into the security system of any locked door or device and get access of it. The player can disable cameras, turrets, robots and even get extra credit and experience points. Players can also view emails to get to know the locations of items and get access codes

You can get access to these electronic devices either by finding the correct password hidden somewhere or by hacking them if you have proper hacking augmentations equipped.

Hacking starts by approaching any device and pressing E to get access to the login page. Once you are at the Login page, press E again and it will bring you the hacking screen. This hacking screen represents a network that you have infiltrated through an I/O port.

Your goal is to reach the network’s Registry before its Diagnostic Sub-Routine discovers your I/O port entry and fires an alarm or kicks you out. This is like a mini-game where the player will have to capture a security node by moving from node to node, while the security system does the same and if the system catches player’s node first it will kick Adam out of the system and fire and alarm.

Now keep that in mind that during hacking the game is not paused and Adam is occupied in real-time so you need to be sure about your surroundings as you can be caught off guard.

Before you begin your Hacking adventure in Deus Ex, you need to know the hacking basics:

I/O Port
The I/O port is your entry point into the Network.

Directory
These are common nodes you will have to capture to progress through the network.

Bridges
You will travel through bridges to reach a node. There’s a catch, you can’t travel both ways on all bridges. Doubled-Lines means the bridge can be traveled in all directions while doubled-arrow lines can only be traveled in the direction indicated by the arrows.

Registry
This is your destination. You need to access the Registry to reach the date of the hacked computer or device. There can be more than one Registry so don’t panic.

Diagnostic Sub-Routine
It’s a security system that’s been installed in every Network. It will block your access to the protected data by attempting to reach your I/O port.

API
You can capture an API either to make hacking a terminal easy or make it difficult. Capturing an API will effect either positively or negatively; the rating of surrounding nodes that are connected to that API by a bridge. By Rating, we mean how difficult it is to hack a specific node.

Data Store
These hold valuable items, such as programs or money. You will find them mostly outside the critical Network path. You can risk your entire hacking by trying to capture them but the reward is mostly worth it.

Rating
Every node has a rating shown on its side, which indicates how difficult it is going to be to capture that node.

Your goal is to reach the Registry. To reach your goal, you need to capture nodes. Now, you try to capture nodes by capturing those that are connected to those that you have already captured. Click and hold the left mouse button to bring up the Hacking Option Wheel. Now select the desired option with your mouse and then release the left mouse button. There are several ways you can hack any computer or device in Deus Ex: Human Revolution and they are explained below:

Capture
Capture as the name suggests; allows you to capture nodes. It’s a basic function that is required to progress through a network. It takes two clicks to capture a node, one to select the node and then you will have a few options on how you want to capture the node.

There is attack and action method but the most secure and easy method is the flag method. Now as you see the light at the center of the device blinking, when it goes off you should click the flag and capture the node, this way node will be able to capture the node without even alerting the system

Every time you highlight a capture option, you will see a ‘Detection Probability Rating’, which indicates how likely it is that the Diagnosis Sub-Routine will detect your intrusion into the network.

Fortify
Fortify allows you to build protection around nodes that you have captured. It’s the best way to proceed in situations when slowing down Diagnostic Sub-Routine’s progress is your best strategy to succeed.

Nuke
Nuke will allow you to instantly capture nodes, without cost or delay. Each Nuke program has one-shot use – they are limited so use them wisely.

Stop!
Stop program allows you to stop Diagnostic Sub-Routine’s progress for a few seconds. Like Nuke, it has a one-shot use, so use it wisely. You can press Q anytime during hacking to activate the stop program.

Successful hacking will allow you to reach emails, open locked doors, shut down cameras and more but as always, there is a catch. You can only make limited attempts to hack any given device. If you spend all your attempts, the device or computer will lockdown for a certain period while an alarm is triggered. If the device is locked down, you will have to wait for a cool-down period to end before attempting to hack it again.

Keyboard
Direction keys W, A, S, D move the canvas. Press Q to Quick Stop and ESC to Back / Disconnect – with a confirmation.

Now that you know about the basics of Hacking in Deus Ex, let’s talk about how you should approach hacking in the game. Few simple rules that should get you going:

When you start the hack, look for the points where you need to go (Data Registry). You can fortify your points of entrance but only if you have upgraded it otherwise you may be detected while fortifying it so do not in these situations.

Keep your focus on what you need to do, don’t mess up everything but it’s ironic that sometimes you get rewarded with Stop/Nuke Software or XP for doing just that.

Mostly, you will need to hack on the circular node, it can be multiple at times. Once or multiple, these circular nodes are your primary concern and hacking all these will result in a successful hack. Once you have started hacking a file/node, don’t be idle and watch it to get hacked.

Move on to the next node as the percentage in previous rolls. You can hack multiple nodes at one time, which helps in hacking faster especially when you have two nodes to hack on opposite sides.

Always pay attention to the direction the arrows are pointing toward, that’s the path your current hack will open. With upgrades, you should have a fair idea if you would be detected while attempting to hack. It will help you be that extra cautious that may save your skin.

Don’t panic if detected, you should have plenty of times even after getting detected to hack the given door/terminal. Or as a last resort, save a nuke which automatically hacks the current file/node you are on. Stop will allow you to temporarily stop the countdown so save these two tiny software as your last resort. Also, look for the files that say ‘Spam’. These can also buy you little time when hacking if you decide to capture it anyway.

You can invest some Praxis Points into hacking-related augmentations to make your life easy. When you are hacking, look for datastore; it’s a cube looking node that contains some rewards when completed. It’s either credits, a Stop worm, or a Nuke Virus.

Hacking can not only take a sting out of your goal but also point you in the right direction. For more help on Deus Ex: Human Revolution, read our Walkthrough, Unique XP Books Locations, and Augmentations Guide.