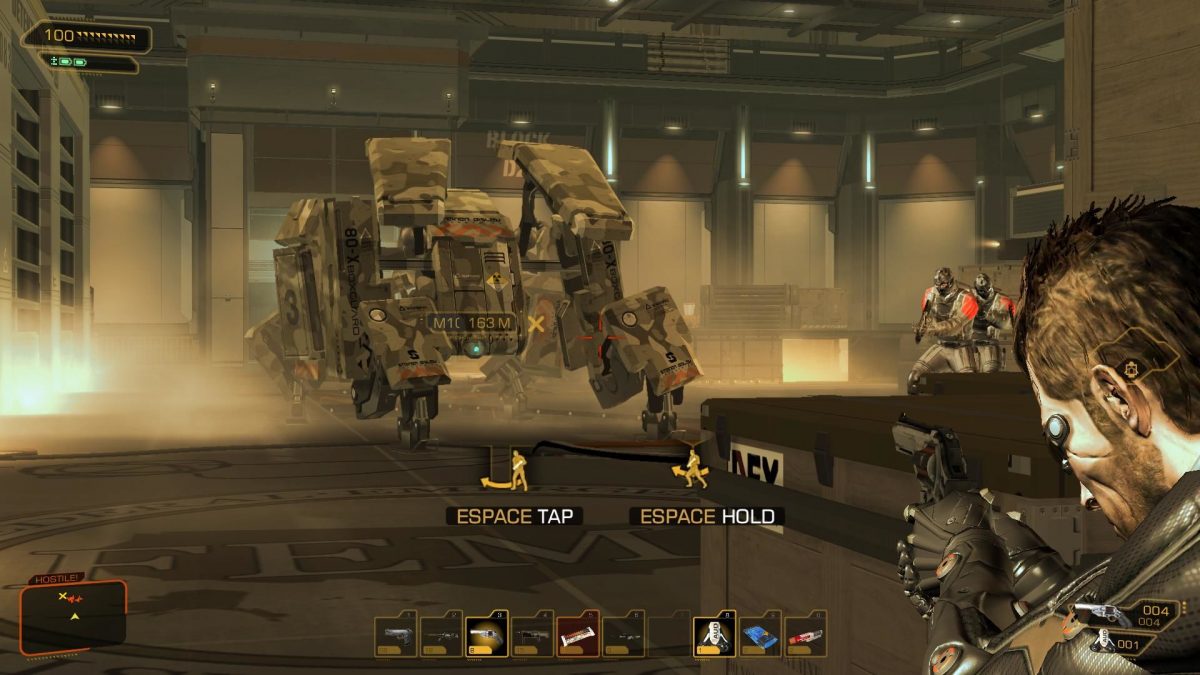 Core to Deus Ex: Human Revolution are combat, stealth, social and hacking elements. Developers have gone on depth to explain the importance of each approach but if that wasn’t enough, here is the recap.

Deus Ex: Human Revolution is a type of game that relies more on Stealth and Social factors than on combat, which makes it easy for you to play most of the game without even killing anyone. But from time to time, combat will be your only option to save your life. Though Augmentations will help, you should also consider using your weapons and environment effectively.

Aim for the Head
No matter what weapon you are carrying either pistol or revolver, always aim for the head because one headshot can easily kill an adversary and you can earn more XP out of it.

In a combat you cannot last too long against your opponent’s even with your health at 200. Therefore, you should cover and fire when the firing has stopped from the adversary side. Reload when in cover, because many opponents have firing patters or they just need to reload.

Don’t stick to one position in Combat
When in combat, you can’t always be in an open area where you can easily face your opponent. Stay stealthy and hide somewhere and when the right time comes, jump on your opponent. But don’t stick to one spot, move around and change places. In this way the adversary doesn’t know your location and you have the upper hand.

Firing from Cover
When in cover, fire or throw few ammos at our opponent. Don’t fire from behind the cover, this way you’ll lose accuracy of the shot. Take a brief look and then fire with an accurate shot.

Takedowns
Takedowns are really important for stealth and combat as they give more XP. If we compare lethal Takedowns with non-lethal takedowns then you’ll get a quieter and non-messy result from a non-lethal takedown. You can easily drop an adversary with before he is even aware of your presence.

Combat is not always your best option, sometimes you need to be sneaky and get past the enemies without them noticing your presence. This is where your Stealth skills come in handy. You need to be silent at all times, finish your enemies from behind and then quickly hide their bodies without anyone noticing you.

You can hide bodies by press and hold E while targeting at the dead body. It will enable you to grab hold of an arm or leg of the body and move it around and leave it areas where there is no risk of it being seen. Make sure that your enemies are unconscious or aren’t re-awakened as it can jeopardize all your effort.

Moving from Cover to Cover is the best way to proceed when you intend to remain silent and hidden. You can press the right mouse button while in front of object or surface to get in cover. Deus Ex: Human Revolution’ cover system allows you to make use of several covering techniques. Two of these are Covering Swap and Rounding Cover.

Cover Swap allows you to move from cover to cover by performing a quick roll from one cover point to another. While in cover, tab SPACE to go from cover to cover. While Swap Cover allows you to move to next covering position by doing a lateral roll, the Rounding Cover technique allows you to stay in cover as you move to another covering position. Rounding Cover is especially handy when you need to stay hidden from petrol. You need to press and hold SPACE when reaching a cover to turn around it.

Deus Ex: Human Revolution augmentations allow you to influence different characters that you can interact with in the game. You can start an argument with them and then try to convince them to help you. Wherever social interaction is possible, a selection wheel will appear, displaying 3 different approaches for you to choose from.

First thing first, listen carefully to what a character tells you, read between the lines and then go with the answer you think will most probably convince that character. Getting yourself equipped with social augmentations will surely help your cause. Since social augmentations will add three more options for you to choose from and choosing the right response from these new options will instantly convince the character.

Fairly early in the game, you will be faced with the choice of which augment to buy/upgrade. Augments will help you in various ways, but some are more useful than others. Here I will detail some of my favorite augments and why they are my favorites. You will be given options to choose augments or to buy or upgrade them. Augments play a very important role in many ways, Augments such as:

Blast Through Weakened Walls
This is the a very useful augment as it only costs 1 Praxis Point and it will pay for itself when you explore for it. This augment makes hidden paths for you and allows you to find treasure troves. (If you are doing a non-lethal playthrough, get Smart Vision to avoid that.

Glasshield Cloaking System
This is the stealthy man’s ace in the hole that grants you the power of invisibility for 3 seconds and can be upgraded to 7 seconds. Using this augment, you can go through laser as well which will help you in future.

Smart Vision
Seeing through walls can be very useful when going on a killer riot. You can spot the adversary’s even when hidden behind walls. And can kill them when they have their backs turned on you.

Icarus Landing System
This augment is useful as it activates when falling from at least ten meters or higher. It allows you to escape quickly without encountering any adversaries. It helps in situations where the stairs are populated with adversaries. It goes great with invisibility.

Hacking can grant you more XP, software and earning credits. You should hack everything regardless of having the code. These are some useful hacks in Deus Ex: Revolution

The Minigame
Locate the fastest path to the green nod and hack each and every square node. These nodes will provide you with rewards. Specially the red node, it will unlock the device for earning all the rewards.

Nuke is a program that hacks into system nodes without being spot. You can activate it by placing the cursor over the node to select the nuke from the hacking selection wheel. It can be found in Pritchard’s office

You can read our Deus Ex: Human Revolution Hacking guide for that.

There is more to it, you can always explore more options if you fail in your first attempt. All the quests in Deus Ex: Human Revolution can be completed with more than one approach, so don’t limit yourself, explore and explore more. Remember, combat is your last option. For more help on Deus Ex: Human Revolution, read our walkthrough, Unique XP Books, and Augmentations Guide.