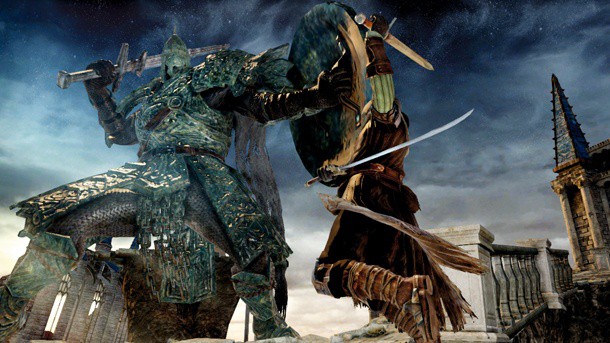 In order to unlock the Dark Chasm of Old in Dark Souls 2, you need to talk to Darkdiver Grandahl within the Black Gulch, Shaded Woods, and the Drangleic Castle.

Successfully doing so will grant you access to the Pilgrims of the Dark Covenant. Once you are inside the Covenant, you can sacrifice a Human Effigy and enter the Dark Chasm of Old.

Before entering the area, you need to make sure that you have some Flame Butterflies with you as you will have to light up several Abyss Beacons before encountering the boss.

You can enter this area from any of the destinations mentioned above but, I will be starting the guide by entering through the Black Gulch shrine.

Once you get inside the dungeon, keep on heading forward through the narrow tunnel and come out in a small room. You will see an Abyss Ironclad deep below and I would advise dealing with him from a range.

After dealing with the Ironclad, move a bit further and take out the Pretender using the same technique and then deal with the last enemy in any way you want.

Keep on following the path and head to the left side first to light the Abyss Beacon. After doing so, head back and turn right this time to get inside a small room. You need to clear the area of all enemies to make the Mist disappear.

Get inside the path blocked by the Mist and you will travel back to the Black Gulch. From there, travel to a Bonfire and head towards the Shrine in the Shaded Woods.

Once you get back to the Dungeon, keep on following the path until you come across a small room on your left side. You will face three enemies in this small room; two Dark Spirits and one Forest Spirit.

Try and take out the Tenebrous Rogue using a ranged attack or lure him to your location. Once you are done with it, make sure to take out the Forest Spirit first as it can be really frustrating with the Shockwave spell. Also, mind your surroundings lest you will fall in a pit.

After taking out the enemies; light the Abyss Beacon and travel to the far side to call an elevator down. As soon as the elevator comes down, you will have to face some more enemies. Take them out in any way you like and continue along the path to drop into a hole and travel back to the Shaded Woods. Travel to a Bonfire and head towards the Shrine in the Drangleic Castle.

After getting inside the Dungeon for the third time, follow the path in the water to reach the other side of the area to find A Chip off the Ol’ Rock. After defeating the first enemy, head forward to find a Dark Spirit. First, take the Dark Spirit out and, head forward to take care of a Forest Spirit.

Once you have defeated all the enemies, continue along the path and light the final Abyss Beacon followed by backtracking your steps and you will be face a Phantom. Use any ranged attack to take it out and clear the Mist blocking your path.

To know, how to defeat each enemy and the Darkluker, read below!

Forest Spirit
These enemies have a number of spells under their sleeves which can be really frustrating at times. One of the easiest ways to beat down this enemy is by poison using Poison Arrows. You can also get a Backstab for a quick kill.

Some Forest Spirits carry a Sacred Chime and must be dealt quickly as they have great ranged and healing spells. Furthermore, they are also capable of performing knockback Miracles, sometimes. Once again, it is pretty easy to poison those using Poison Arrows and see them die.

You can either melee attack it or use Poison Arrows for a slow kill. However, the hammers at its disposal will deal massive amount of damage and blocking them with a small shield is a complete no-no.

It is recommended that you take it out using an Ultra Greatsword.

Pretender to the Xanthous Throne
The attacks at this enemy’s disposal are Great Chaos, Fireball, Great Combustion, Flame Swathe, and Forbidden Sun. Since all of these attacks are fire-based, a little fire resistance against this enemy will practically make it useless and you will be able to take it out in no time.

Tenebrous Rogue
The primary purpose of this enemy is to break your Defense by using Bandit’s Knife and Mytha’s Bent Blade. This enemy can be defeated in no time as it can be regarded as one of the easiest enemies to kill.

And like most of the enemies of this Dungeon, it can be killed from a range by using Poison Arrows.

Underworld Deadeye
This enemy has a Compound Bow and a Shortsword at its disposal which it uses during different scenarios. However, the low poise of this enemy makes him vulnerable to most of the attacks.

His attacks can easily be guarded by a small shield. You can also lure it in a corner and then keep on attacking until it is out.

Sometimes, it will try to evade the spells which will provide you with an excellent opportunity to attack it with a long ranged weapon.

Shadowveil Assassin
The best way to tackle this enemy is by using horizontal attacks so that it is unable to evade and execute a counter-attack. Using a shield against this enemy will not do you any good as this enemy is extremely offensive.

It can also evade spells and arrows very easily; therefore, it is recommended that you try to push it off the ledge for a quick kill.

The Ghost of Princes Past
Though this enemy is very agile, most of its attacks can be blocked even by a small shield. The place where you will encounter him will be very close to a pit and you can easily dispose it off into it.

However, if you do not wish to do so, you can always try your long-ranged attacks or magic.

A Chip off the Ol’ Rock
This enemy deals massive amount of damage with its Great Hammer and has the ability to block every attack using the Greatshield.

Luckily, it is positioned in such a way that you can easily throw it into the pit and be done with it. If not, make sure you are full on Poison Arrows and take it out with ease.

The Boss – Darklurker
If you are playing as a melee character, I would advise you to get in and trigger its Shadow Blade attack which can easily be avoided to execute follow up attack for high damage.

Darklurker will often start using attacks like Hellfire Barrage and Dark Soul Bomb which are easier to evade if there is a huge distance between players and the spell.

At some points, it will become invisible and teleport to other areas. However, even in this scenario, you can target it and have some additional damage.

Keep on evading the attacks and executing follow-up attacks until you get it to 60% HP when it will make a clone of itself.

Once it does that, you need to lure them close to each other because doing so will not only increase your chances of inflicting a double damage but, you will also be able to evade the ranged and other attacks more effectively.

The best bet in this scenario is to stay in melee range and wait for the Shadow Blade followed up by counter-attacking it.

As for the players who prefer long-ranged combat, I would advise not getting them close to each other and taking them out separately.

By doing this, they will be able to evade the long ranged attacks of one clone while evading the Shadow Blade (which is very easy to evade) of the other clone.

And in case, you are wondering, you cannot use Poison Attacks on the boss for continuous damage. The best way to win this fight is to have a lot patience and prudence.

Share your own tips and strategies to score a victory in this area in the comments below!