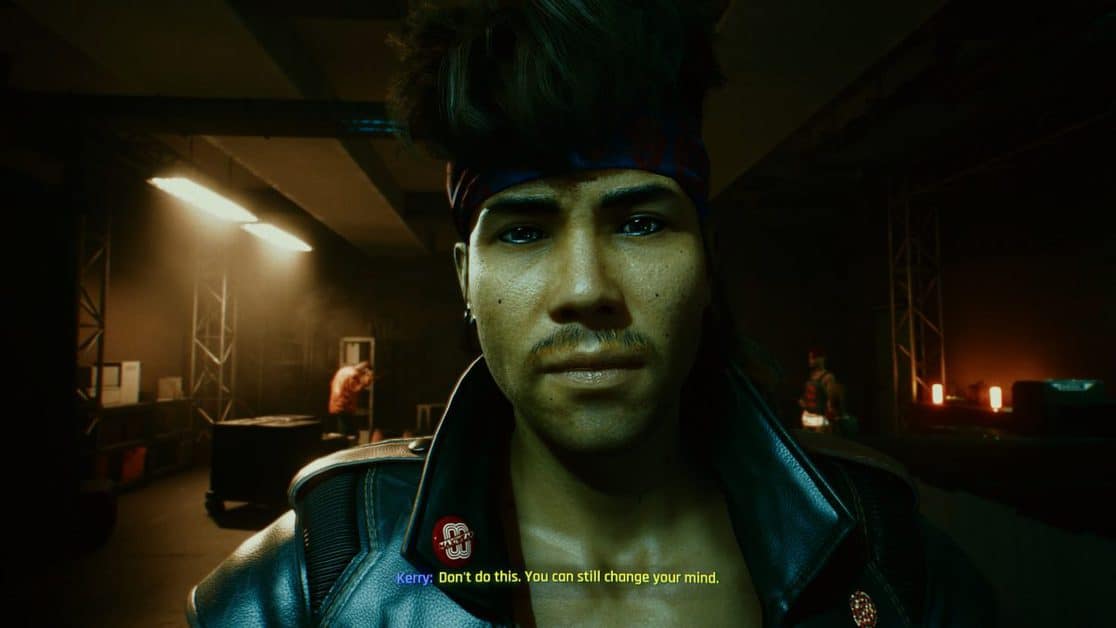 And since he is only interested in men, you will need to have the male version of V to romance him which will unlock some unique dialogues and outcomes.

This Cyberpunk 2077 guide will be on how you can successfully romance Kerry by selecting the correct dialogue options and completing the right jobs.

How to meet Kerry in Cyberpunk 2077

You’ll meet Kerry Eurodyne after completing Rogue’s side quests. Kerry will join you with a couple of his side quests, which you’ll have to complete.

If you do things his way, you’ll eventually be able to have sex with him during the last side quest. This will take place while you’re on a yacht.

Kerry is only interested in men; hence this relationship can only take place if you’re playing a male V character.

Kerry is only interested in men; hence this relationship can only take place if you’re playing a male V character.

Be on Kerry’s side always, don’t miss out on an opportunity to help him, and don’t let go of any chances to kiss him.

If all of his side quests are played right, Kerry will be all yours. Completing Kerry’s quests will also reward you with the To Bad Decisions! Trophy.

How to romance Kerry in Cyberpunk 2077

You will have to complete Rogue’s side quest “Chippin’ In” to unlock Kerry’s quest line.

Afterward, you will need to complete 7 side quests for Kerry to romance him.

Complete the side quest for rogue “Chippin’ In”, and it will unlock automatically during the storyline. Keep checking your quest log to see if it has been unlocked.

Now, Let’s move on to Kerry’s side quests so you can start a relationship with him in Cyberpunk 2077

This is the first side quest and it will send you on a search for Kerry. You’ll find him on the ground floor of his villa. He’s behind a door.

This side quest will take place after the “Chippin’ In” side quest if you become friends with Johnny.

No matter what responses you decide to stick with during this side quest, you’ll end up with Kerry anyway.

This quest will take place after you’ve completed the “Second Conflict” side quest.

Again, your responses here won’t determine if you end up with Kerry or not.

After finishing the “A Like Supreme” quest, wait for Kerry’s call. This call will initiate the quest.

He’ll call you 24 to 48 hours after you’ve completed the last quest.

Tell him that you like explosions and races. After this, he’ll give you money and call you. This call will begin the quest, and you’ll have to head inside the club.

There’s a dumpster around the corner that can be used to climb and shoot the lever for an extendable ladder.

Climb the ladder and enter the club.

Exit the club and kill time for the next 24 hours while waiting for another call from Kerry. While on the balcony tell him that you’re glad you two got a moment to yourselves.

Choose these two responses next,

After that, tell him that he does not need to be afraid of anything before kissing him.

The kiss will only take place if you’re playing a fully male character.

Wait for Kerry’s call again (Approximately 1 day) and tell him you’re on your way. Once you reach, join him on his Yacht.

These two responses will help you board the Yacht,

Once Kerry is up on his feet, you stand up too and tell him you’re ready to play. Enter the boat and start destroying it.

Once Kerry is by the lever, help him and then kiss him. After that, the scene would follow that you’ve been long waiting for.

Once the boat is nearly turned to ashes, both of you will swim back to the shore.

While on the shore, sit down and tell him that the burning Yacht is beautiful. Tell him that it’s a wonderful way to settle a score.