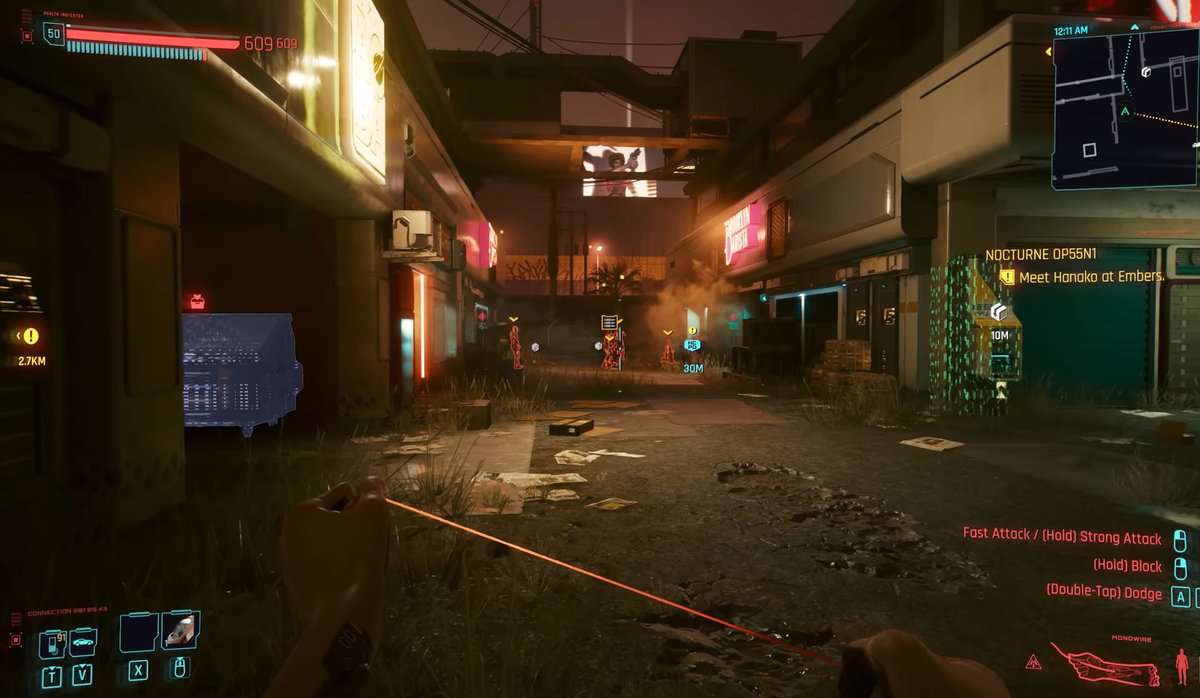 Our Cyberpunk 2077 Hacking Tips will get you up to speed with all the tips and tricks of hacking in Cyberpunk 2077 so that your venture through the Night City can be a whole lot easier.

In Cyberpunk 2077, whether you’re having difficulty taking down enemies or getting past locked doors, a bit of hacking now and then will certainly be useful.

Aside from simple hacking methods, there’s another relatively complex way that includes the use of the Breach Protocol.

Breach Protocol is a kind of quickhack that lets you interact with the network so that you can get your hands on some handsome rewards.

However, fret not, because below, you’ll find the details of all hacking-related tips. So, let’s begin!

From locked doors to enemies’ cyberware, you can scan almost everything in your surroundings.

Not only does scanning makes you aware of the area around you but you’ll also be able to use the hackable spots in your surroundings to your advantage.

To activate your scanner mode, just hold the Tab button.

Quickhacking, meaning hacking your enemies directly and messing with their circuits, allowing you do stuff like dealing damage, stun them for a while, lock their weapon, ping them on your HUD, turn off their eyes, and even overheating them, setting the to fire.

Some of the late-game Quickhacking skills even allow you to explode your enemy circuits, turning them into a kamikaze explosion.

Other than the best Cyberpunk 2077 hacking Cyberware, you also need to have a lot of Ram for V, which can be upgraded at Ripperdocs.

Make full use of the Cyberdeck

With the Cyberdeck integrated into your game, you’ll get access to quickhacks that you can use to mess with your enemies’ minds or hack into their Cyberware, etc.

There is an array of quickhacks available for you to choose from, each costing one RAM.

The best Cyberpunk 2077 Cyberdecks can only be bought for V, but they allow you to increase your Ram and the different types of electronics that you can detect and hack.

You can use CCTV cameras and get a layout and placements of the enemies, turn on or off various electronics and create distractions.

The best thing is that high-tier Cyberdecks allow you to scan enemies, and learn their weaknesses, strengths, the weapons they are using, which faction they are affiliated with, and how much Street Cred you get for killing them.

Breach Protocol is a hacking minigame that allows you to interact with various consoles. Most of the time, you get excellent rewards for completing them, things such as blueprints, legendary spare arts for crafting items, and sometimes epic weapons as well.

Breach Protocol is a relatively easy minigame to complete, and is a perfect way to get Intelligence related Attribute Points.

Data Mines are nodes that allow you to hack them, similar to Breach Protocols. Hacking each Data Mine gets you a hefty amount of cash and even Street Cred.

The more difficult the Data Mine is to hack, the higher the reward that you get for that Data Mine.

Picking out your Cyberware

Now that we have talked so much about the high-tier Cyberware that you need to hack, let us directly talk about Cyberware.

Your Operating System determines how many and how strong hacks you can use. These are found all around the world, some even on your enemies, but the best and more reliable way to get new and best Operating Systems in Cyberpunk 2077 is by purchasing them from Ripperdocs.

Every Operating System Cyberware in Cyberpunk 207 comes with its own allotted Ram drives, that determine your hacking capacity. The more ram that you have, the more and stronger hacks that you can use.

Other than Operating Systems, you also need to pick out your Frontal Cortex, which works similarly to your CPU where your Operating System works. All Frontal Cortex also have their built-in Ram and provide other features like restoring your Ram, increasing crit chances, or preventing you from being hacked.

Picking out your Frontal Cortex and Operating System in sync with each other will exponentially increase your hacking capability.

Whenever you are storming a place, make sure to check out the security setup of the place. More than often, you will find a few drones and even some turrets in place to stop intruders like you.

These security systems are perfect for hacking and taking over. You can destroy the drones and turrets, or even convert them to help you takeout the enemies in the conflict.

Hacking Security systems provide you a huge edge in every fight, allowing you to almost change the entire direction of the fight.

Your enemies will even take some time to realize that their weapons have turned on them, and will draw their fire enough to let you take them out.