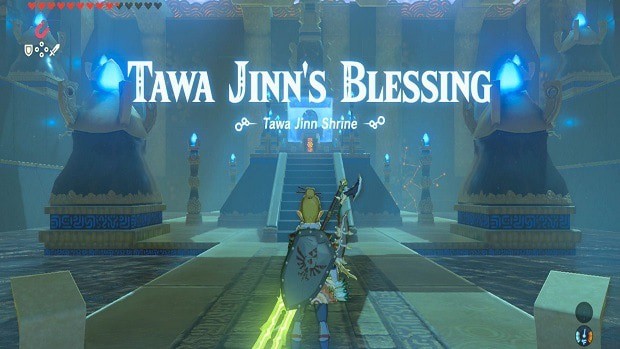 This Legend of Zelda: Breath of the Wild Tawa Jinn Shrine guide will help players to find the related shrine quest, gain access to the shrine and collect their reward.

The Tawa Jinn shrine in Zelda: Breath of the Wild is unlocked through the Three Giant Brothers shrine quest which begins southwest of Hyrule, near Taran Pass that is located to the south of Hateno Tower.

Legend of Zelda: Breath of the Wild Tawa Jinn Shrine

When players finally reach the area mentioned above, structures surrounded by bones, they need to read the stone tablet to begin the Three Giant Brothers shrine quest.

As part of this quest, players need to defeat the three Hinox brothers: Oldest Kin, Middle Kin and Youngest Kin.

All these three giant brothers are located near where the players started the quest from so they simply have to follow the marker to where it leads to find the bosses.

Defeating them all requires some strategy and tactical planning and if players simply charge in without thinking, defeat is highly likely.

To start the fight, players should approach the giants using stealth so they get the advantage of the first hit. Since the giants are sleeping, it shouldn’t be that difficult.

Players can also climb to a high point and start the fight by damaging the giants in the eyes.

Fire arrows are highly useful here as well as throughout the battle to target the Hinox brothers’ eyes and deal decent damage from a safe distance.

Once the enemies get close, players need to use two-handed weapon charge attacks to chain multiple hits.

Defeating each giant will reward players with an orb, all three of which need to be carried back to the area where the quest started.

Players can place these orbs on the round stone in the area and open up the entrance to the Tawa Jinn shrine.

Rest of the journey is simple as players simply need to enter the shrine, open up the loot chest for Great Thunderblade Long Throw and talk to Tawa Jinn to collect the spirit orb.