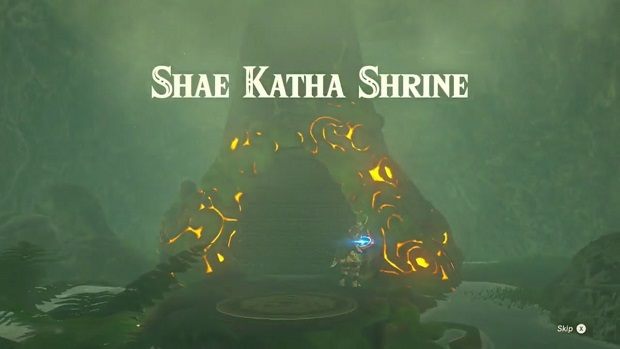 This Legend of Zelda: Breath of the Wild Shae Katha Shrine guide will help players journey through this long quest and finish up the shrine for the end reward while surviving the many dangers in the way.

For more help on The Legend of Zelda: Breath of the Wild, check out our Captured Memories Locations Guide, Side Quests Guide, and Great Fairy Locations Guide.

Legend of Zelda: Breath of the Wild Shae Katha Shrine

The Shae Katha shrine in Breath of the Wild is part of the Serpent’s Jaw shrine quest and it is a pretty long quest that has players traveling a lot, through dangerous areas where lightning is a big hazard.

That is also why any sort of protection against lightning is highly useful when attempting this shrine.

To start their journey, players will first need to find Kaas, the accordion playing NPC.

He is located to the east of the Lake Tower as players follow the road through Faron Forest.

Kaas will, as usual, player his song which contains hints regarding the shrine. This will start the Serpent’s Jaws shrine quest.

Once players have the quest, they need to proceed north-northeast of where they met Kaas towards the river Darcozu, which looks like a dragon flowing through Damel Forest.

Following the river, players reach Lake Dracozu where they will encounter some enemies guarding a statue at the Spring of Courage.

Lightning protection is really useful here as the area is dangerous.

After the enemies are dead, players can pray at the statue for the next clue to the quest which talks about finding Farosh’s scale.

For the scale, players will need to travel southeast of the Spring of Courage and the best way forward is by scaling the mountain to the east of Lake Dracozu since this path also contains numerous gems which the players can pick up.

Once players cross the mountain, they can find Farosh the dragon every night near Floria Bridge, between 9.30pm and 1am as he emerges from Floria Falls and head towards the bridge.

Farosh is always surrounded by lightning so engaging him will be tough. For that, players should unequip anything metal and put on items like the rubber tights.

When Farosh flies past the bridge, players can simply shoot his body with an arrow which will cause a Farosh scale to drop nearby which can be picked up, and then taken back to the Spring of Courage.

Once players are at the spring, they just need to drop the scale in the water and open the entrance to Shae Katha shrine.

There is no puzzle to solve so players can simply go in and pick up the spirit orb and thunderspear.