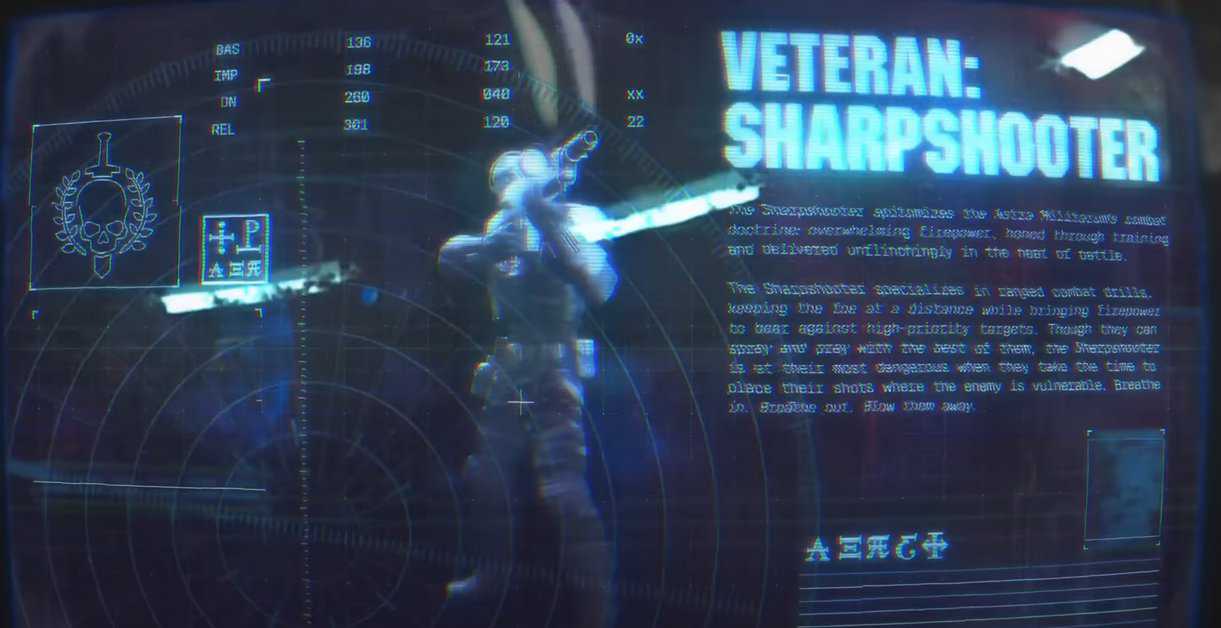 Veteran Sharpshooter is the best option in Warhammer 40K Darktide to eliminate ranged enemies or for those who prefer a more ranged playstyle. To further improve Veteran Sharpshooter’s abilities to handle ranged and melee encounters in Darktide, we have prepared this best Veteran leveling and endgame build guide.

Volley Fire is the core ability of the Veteran the Sharpshooter class in Warhammer 40000 Darktide. While using this ability, the Veteran gets into a ranged stance, equips a ranged weapon for 5 seconds and marks nearby specialist enemies for teammates to focus on. This ability will deal 50% more ranged damage to the targets it hits.

After that, the first Iconic ability of this class is Make Every Shot Count. You can deal 10% more damage by hitting enemies’ weak spots with this ability.

The Aura ability of Veteran is Scavenger. This ability allows you to gain extra ammo whenever you or your ally kill an elite enemy while within the coherency radius.

The passive for this class is Frag Grenade which explodes after a short time. The last Iconic ability, Be Prepared, will give you 40% more ammo reserve while using a ranged weapon.

Now that you know the complete details about this class let’s jump into the best weapons and feats section to make the best Veteran Leveling build.

Weapons are the first thing that you will need to pick for making an excellent leveling build in Warhammer 40000 Darktide. Below you will find the best primary and secondary weapons you will need to make a great leveling and Endgame build.

Power Sword is the primary weapon we choose because we also need to deal with some melee encounters. It has incredible abilities that you can use to deal a lot of damage to enemies.

The blocking ability of this sword allows you to block melee attacks and push back enemies. It can slash through the enemies after pushing back to deal significant damage.

So this weapon will handle our melee encounters, and the second will focus more on ranged encounters, which is the strong area of this class.

The secondary weapon we chose for the best leveling build is Graia Mk IV Braced Autogun. It is a high-speed gun that has a high capacity. You can easily target ranged enemies with it, and it can penetrate through the enemy’s armor to deal some damage.

So, all in all, this is a fantastic weapon choice for you in Darktide. Let’s talk about some feats you should pick while leveling up in Warhammer 40K Darktide.

At level 5, the feat we pick while leveling is At Arm’s Length. This will allow you to replenish 7.5% toughness per second while dealing with enemies more than 8 meters away.

The second feat that you should pick at level 10 is Sniper. It will help you do 25% more damage based on the distance between you and your enemies. So at the range, you can get some bonus as well.

The Bio-Optic Targeting at level 15 combines wells with the core ability of this class. It makes sure all players first target the specialist and non-Ogryn elite enemies.

At level 20, the ability we pick for the best leveling build is Camo Expert. Because of this ability, the chances of enemies hitting you get low if you stay still.

After that the second last feat for leveling build at level 25 is Frag Storm. This ability combines well with the passive Frag Grenade ability and applies eight bleeds to the targeted enemies.

The last feat that we have to choose at level 30 is Counterfire. This feat has many perks, like during Volley Fire; it will deal 25% more damage after hitting enemies’ weak spots.

The primary and secondary weapons and their roles and perks are the same as the leveling build, so we will start with the best feats for the endgame build without talking about them.

The first feat we choose for the best Veteran endgame build is Exhilarating Takedown. Because of this, every time you made a headshot or hit a weak spot from a range, it will replenish 10% toughness.

After that, the second feat that we choose for the endgame build is the Demolition Stockpile. It will help you get a grenade after every 60 seconds in the game.

You may think it is not a better feat, but how it synergizes with our third feat and deal damage makes it a great choice. The Demolition Team also increases your chances of getting a grenade after taking out any enemy by 5%.

So both the second and third abilities will help you gather a lot of grenades to take out a lot of enemies. The ability we choose at level 20 is Camo Expert.

We choose it because it will lower the chances of enemies hitting you while standing still. You can stand still and use the Frag Storm feat to deal eight stacks of bleed to all enemies in its AoE.

The last ability at level 30 for the best endgame build is the same as the leveling build. The Counterfire feat helps you target Scab Shooters first, and each kill will also refresh its duration. Moreover, you will deal 25% more damage to enemies after hitting the weak spot.