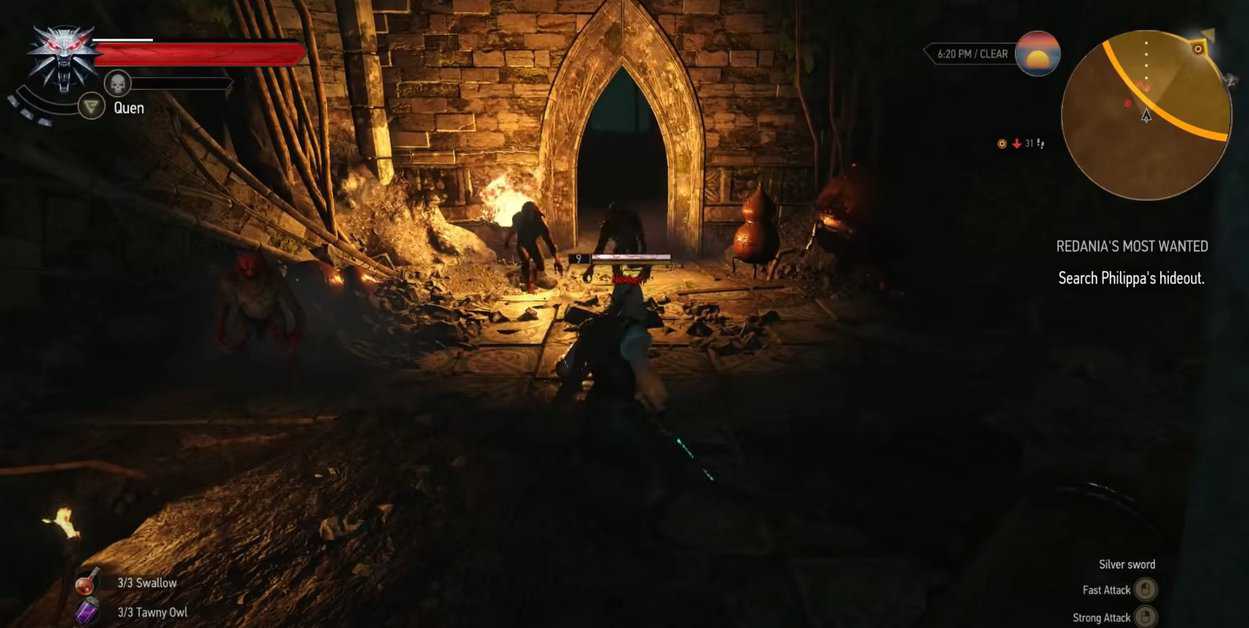 Redania’s Most Wanted, part of the Assassins’ questline, is one of the many side quests in The Witcher 3 that you take on to learn more about the world. During Redania’s Most Wanted, Geralt has to look for clues in an attempt to find the whereabouts of the sorceress Philippa Eilhart and bring her to Radovid.

The Witcher 3 Redania’s Most Wanted walkthrough

As the name suggests, Redania’s Most Wanted asks players to find a most wanted person, the sorceress Philippa Eilhart to answer for her crimes against the Redanian state.

Geralt must go to Est Tayiar to meet the witch hunters. However, they won’t be particularly happy to see him. They believe he will succeed in finding Philippa where they failed and claim the glory for himself, but will still give Geralt the key to Philippa Eilhart’s hideout without any trouble.

Jump down, and you will come across a purple doorway that is not passable. Use your witcher senses hunt for clues in the area. To your right, you will find the correct place where you can insert the plate key, which will open the door.

Use the power cells to activate the portal

Once you’ve made it across to the other side, Geralt will come face to face with a witch hunter with a crystal in his possession. However, he refuses to give it up due to fear of the monsters.

Here, the players are provided with two options for finding the missing crystal: using Axii or simply fist-fighting him. The crystal you’ve just obtained is a power cell that can be used to open portals. Now that you have this crystal in your possession, move forward and look around to find an interesting letter to Philippa in one of the chests lying around.

Eventually, Geralt will come across another portal that can be opened using the power cell crystal you just obtained from the witch hunter. Once you move across this portal, you’ll be required to face off against more Nekkers that must be dealt with.

Once you’ve killed them, you’ll come across another inactive portal, and Geralt will conclude that the Nekkers must have taken the power cell from this portal. You’ll be required to backtrack and kill a few more Nekkers until you find another power cell.

Now that you’ve reached the lowest level of the area, you’ll be required to face off against a fire elemental. Fighting against this enemy will be relatively simple. However, make sure to craft elementa oil to give yourself an advantage in this situation.

After successfully defeating the enemy, you’ll be free to explore Philippa’s hideout. At the end of this cave-like lair, you’ll come across a room where Philippa seems to have stayed recently. If you keep on exploring, you’ll come across two quest items. One of them is a crystal from a megascope and an agate.

Geralt will conclude that this polished crystal from the megascope can be used to obtain critical information about Philippa Eilhart.

Once you exit the area and return to the entrance, players will be provided with the choice of either giving the witch hunters the crystal or not. If you choose to give them the crystal, Geralt will learn nothing, as the Hunters will take it back to Radovid and take credit for your actions.

If you keep the crystal to yourself, Geralt will be required to fight against a group of angry hunters and kill them. Players will now be given a major choice of deciding who gets the crystal.

Here are the possible choices to conclude Redania’s Most Wanted, although which ones you get will depend on how you have played The Witcher 3 so far

Showing the crystal to both Yennefer and Triss will have the same outcome as they’ll simply reveal the hidden message of the crystal to Geralt. However, in order to get the option to show the crystal to Triss, Geralt must complete the Now or Never quest first.

If you choose to give it to Radovid, he will give it to his prisoner mages, and Geralt will receive his due reward. The reward that you get for choosing this option is 135 Crowns.

The last option is to lie to everyone. Not only will Geralt lie to the hunters but also Radovid about his findings. However, by choosing this option, Geralt will also be unable to show the crystal to Triss or Yennefer. If you lie to everyone, this will also conclude the quest without any additional reward, and you will get 50 XP.