How To Get Gourmet Perk In The Witcher 3 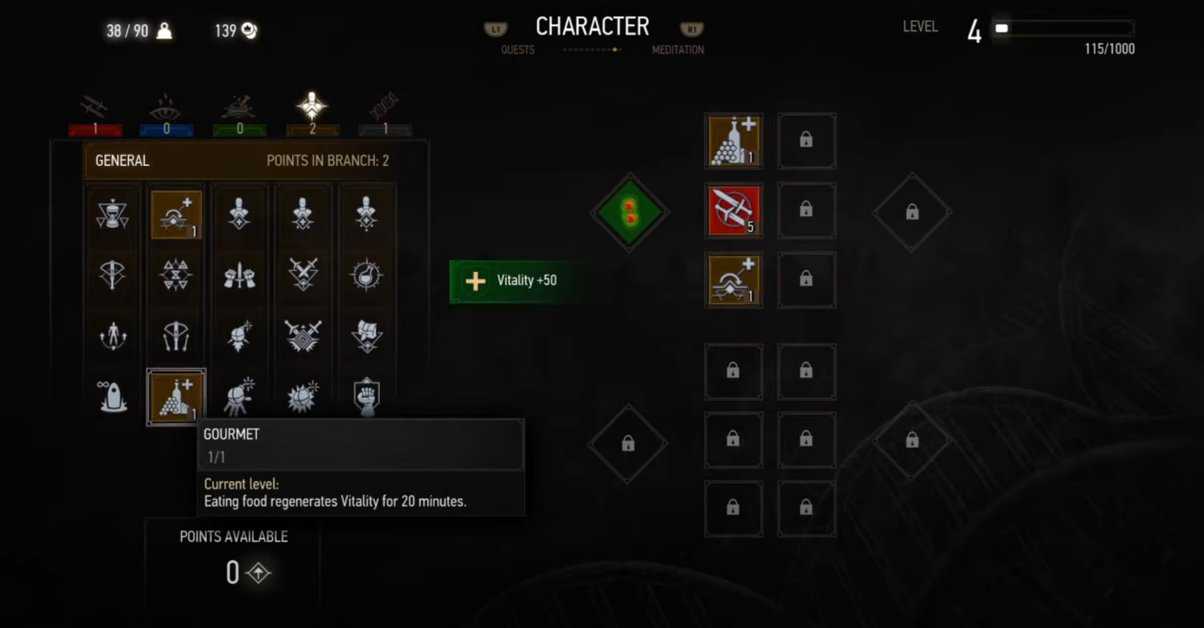 Gourmet is one of the many skills added in the Blood and Wine Expansion of The Witcher 3. The Gourmet perk will increase the duration of HP regen from the food, which is really important, especially in the death march difficulty.

This skill is handy in the early game. It helps you save a lot of food since it prolongs the Vitality regeneration from the food for up to 20 minutes in The Witcher 3: Wild Hunt.

This guide will explain one of the S-tier skills you can acquire in The Witcher 3: Wild Hunt, the Gourmet Food Skill.

Where is the Gourmet skill?

You can find the Gourmet Perk under the General Skills tree in TW3. Gourmet Food Skill is one of the earliest skills you can get in TW3: Wild Hunt. The skill basically turns any food item that you eat into a healing item and allows you to regenerate health for 20 minutes constantly.

As an added bonus, this regeneration effect lasts for 20 real-life minutes, not in-game minutes. This means that you can basically regenerate your health for a long time without depending on your other potions.

Most food items you can eat regenerate your health for 40 HP per second when outside combat and 25 HP per second during the fight. With this skill, you can use Healing Potions and signs like Quen to boost your healing further when needed.

You can unlock the Gourmet Perk quite early on at the start of The Witcher 3. It only costs 1 Skill Point to unlock. It is not just an early skill but also very useful since you only get a few healing potions and other resources early on in the game.

You can get a lot of Pork early on in the game, as you can find pigs in almost every human settlement allowing you to butcher them and harvest them for as much Pork as you want.

Although continuous HP regen without depending on outside consumables throughout the day, the skill is not as appealing as it seems. Sun and Stars skill allows Geralt to go without using healing potions only through the day, leaving you helpless during the night.

When comparing Gourmet Food Skill with Sun and Stars Skill, especially for the Death March build, Gourmet Food is the best skill you can choose for yourself. You get better HP regen per second, can activate it any time, and it works even during combat.

Only people who want an even bigger challenge than the Death March difficulty should select Sun and Stars over Gourmet if they feel like Gourmet makes the game too easy.

The faster healing capability of the Gourmet Food Skill in The Witcher 3: Wild Hunt allows you to even heal through enemy attacks and come out on top. As you grow stronger and increase your offensive and defensive capabilities, the constant healing allows you to last much longer when you are surrounded and facing multiple enemies.

If you want to lock Gourmet Food Skill early on without having to grind too much, you can head to Place of Power, located just south of Broken Bridge. The area is relatively safe and the only place in White Orchard that is safe enough for you to venture on early on. Here, you can get yourself a Skill Point early on, which can be used to unlock Gourmet Food Skill very soon.

You can see which foods regenerate how much HP. In the long run, it’s evident that you choose food that grows 80 HP per second rather than foods that regen up 50 HP per second in Witcher 3.

Since any food in the open world holds almost no monetary value, it’s best to keep it until you get better consumables. You can then sell low-value food you might have and use the money to buy food that allows you to regen more overall health.

As you progress and unlock new skills like Undying and Active Shield, Gourmet Food does lose its charm and becomes somewhat useless. These skills are far superior then Gourmet Food, and when you have progressed far enough, you should respec yourself and swap out Gourmet Food for a better skill that you might need.