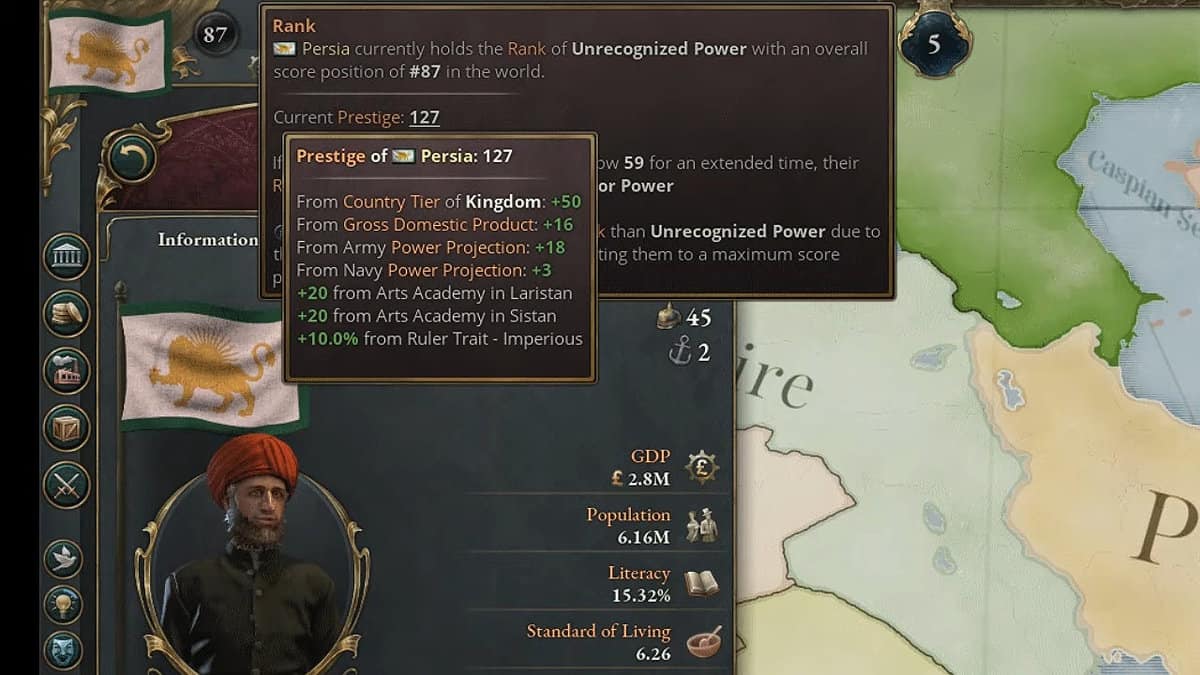 You can build your country to achieve several ranks in Victoria 3. Each rank shows how glorious and powerful that country has become. The higher your rank, the more influence you have in worldly affairs.

Your rank also determines how other countries look at you. Becoming a Great Power in Victoria 3, the highest of seven ranks, will give you a global reach. You will be able to involve yourself in far-off conflicts and other countries will be forced to listen to you during negotiations.

Prestige is one of two factors that determines your country’s rank. Prestige involves a lot of different factors but in summary, it is a measure of your ongoing progression versus other countries in the world.

How to get high Prestige in Victoria 3

Have an impressive army

The thing to note here is that having a large army will give you Prestige. However, improving your army’s fighting capabilities will further give you additional Prestige.

Have an impressive navy

Similar to the army, having a strong navy will boost your Prestige rating in Victoria 3. However, unlike the army, you will receive far more Prestige if you manage to build an impressive navy.

Have a high GDP

GDP reflects the overall economy of a country. The higher the GDP, the more you have to spend on your country, and the more Prestige you get. Meaning that you will have to bank more on industrializing which will in turn increase your Prestige.

Make sure to maintain your income streams because if your GDP starts falling, you will start losing Prestige as well. It is a two-way street.

Have a high culture rating

Investing in culture will give you Prestige in return. For example, you can build art academies to promote art in your nation. That alone will grant Prestige but you can get even more by becoming a patron and sponsoring art for years to come.

Be a top-three goods producer

If your country manages to become one of the highest goods producers in the world, you will earn a lot of Prestige in return. There are three tiers in this case: first, second, and third.

Even if you are the producer of the third-highest goods in the world, you will still have an impressive amount of Prestige. Just note that certain goods give you more Prestige than others. You can check that in your Market/Trade tabs.

Keep an eye out for new expeditions and projects on a global scale. For example, sending an expedition team to far-off regions in the world for exploration will get you a lot of Prestige. You can also build a dam or canal in another region for more Prestige.

Rank is also an equally important factor when it comes to determining the country’s worth, as it is dependent on Prestige. You can build your country to achieve several ranks in Victoria 3. Each rank shows how glorious and powerful that country has become. The higher your rank, the more influence you have in worldly affairs.

Your rank also determines how other countries look at you. Becoming a Great Power in Victoria 3, the highest of seven ranks, will give you a global reach. You will be able to involve yourself in far-off conflicts and other countries will be forced to listen to you during negotiations.

In Victoria 3, the countries are granted the following ranks. These include:

Great Power
These are considered distinguished powerhouses due to their global reach, for example: Great Britain.

Major Power
These are known as paramount powerhouses that often decide the course of power in their home regions and carry a limited global presence. E.g., “Kingdom of Two Sicilies”.

Minor Power
These are considered due to the fact that they are important in determining how a local conflict in their home region turns out. They are basically irrelevant on the world stage. E.g., “Mexico”.

Insignificant Power
These are nations that generally, do not have the ability to influence the outcome of the local population. E.g., “Free City of Krakow”.

Unrecognized Major Power
These are comparable to nations included in Major Powers. In terms of power and prestige, they have the potential, but they haven’t met the requirements completely in order to succeed their rank. E.g., “Great China”.

Unrecognized Regional Power
These are basically considered unrecognized minor powers that generally lack the power to go against anyone. They will find themselves at the mercy of Great or Major Powers due to their low dynamic ranking. E.g., “Kingdom of Nepal”.

The higher a country is ranked, the more influence capacity it will generate. In terms of capacity, we can take factors like Administration in terms of Authority, Bureaucracy, and Influence.

These things don’t have a stockpile so you can have +500 constantly, which can be taken as your capacity limit. This results in increased Rank amounts to greater freedom in deploying Diplomacy and signing Diplomatic Acts.

Rank also plays a key role in many other systems such as infamy which is how other countries regard you and how many subjects you can have etc.