How To Reduce Infamy In Victoria 3 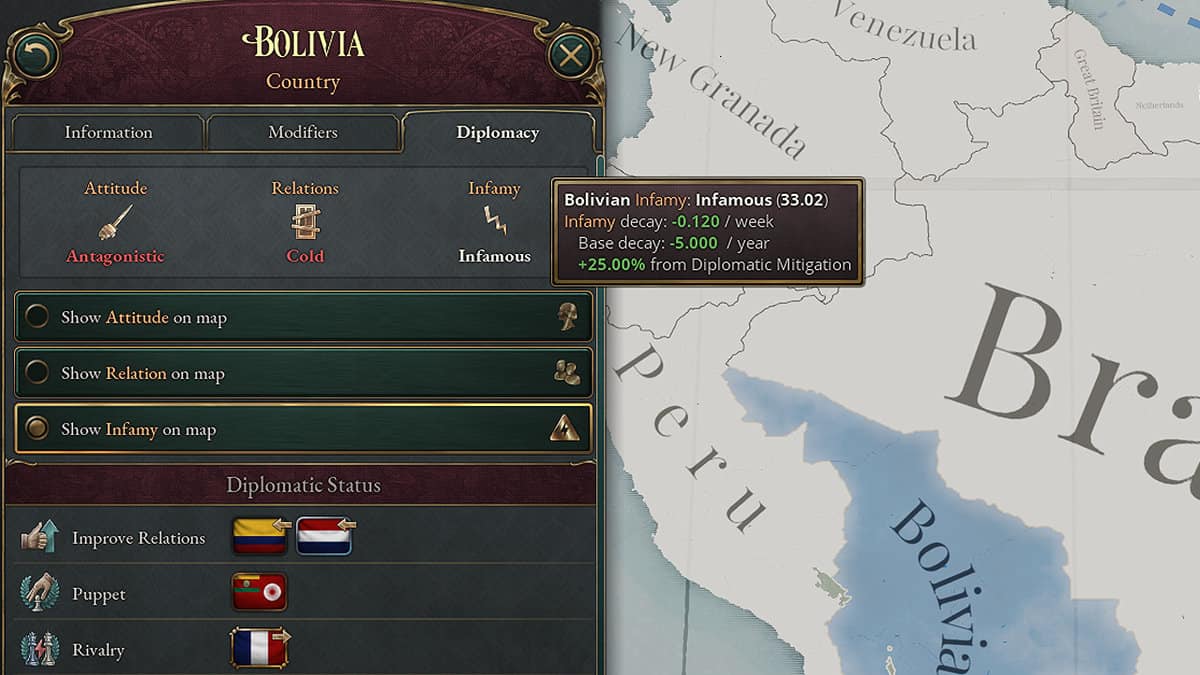 Infamy is perhaps the most annoying game mechanic that Victoria 3 carries on from Victoria 2. Many players find it difficult to deal with as it prevents them from expanding their nation quickly and aggressively, mostly by making relatively bigger diplomatic plays.

The main focus of this mechanism is to keep the powers of all the countries in the world in balance. Any player that decides to take more power and disturb the balance suffers for it as a consequence.

You start the game off with zero infamy in your stats, and the game tells you to keep your country reputable i.e. ‘play nicely. You can check the level of Infamy you have on the “Information” page, which can be opened by clicking on the country’s flag in the top right corner.

Later on, as you begin to expand your country and make more and more aggressive diplomatic plays, the level of Infamy might increase.

How to prevent Infamy in Victoria 3

Initially in the game, you will have zero infamy, but as you continue to expand your nation and make aggressive diplomatic plays, your level of infamy will increase, which determines the extent to which you anger other nations. As a result, it may get harder to make alliances with other countries.

For every diplomatic play, it will have some sort of impact on the level of Infamy which can be seen in the menu before starting the play. If it increases high enough, it will make the other nations wary of you and might result in consequential diplomatic repercussions.

Once your Infamy level reaches to 100 you will be classified as a Pariah, which will result in certain grave diplomatic plays against you by the more powerful countries. This will be done to keep you in your place, and it may even lead to a full-scale world war if need be.

In the case of a smaller nation that makes these unfavorable plays, a world war might not take place, but the respective strategic region will take a stand against them.

Unfortunately, there are not many ways to reduce Infamy – it can mostly be prevented. The first step to take is to avoid making any diplomatic plays that majorly affect the Infamy levels. There’s nothing you can do to reduce an already existing high Infamy other than waiting for it – and the process is extremely slow.

If things fail to die down, and the Infamy exceeds to a point that you now face the threat of extinction off the face of the earth, you might need to resort to using cheats to save yourself.