How To Manage Interest Groups In Victoria 3 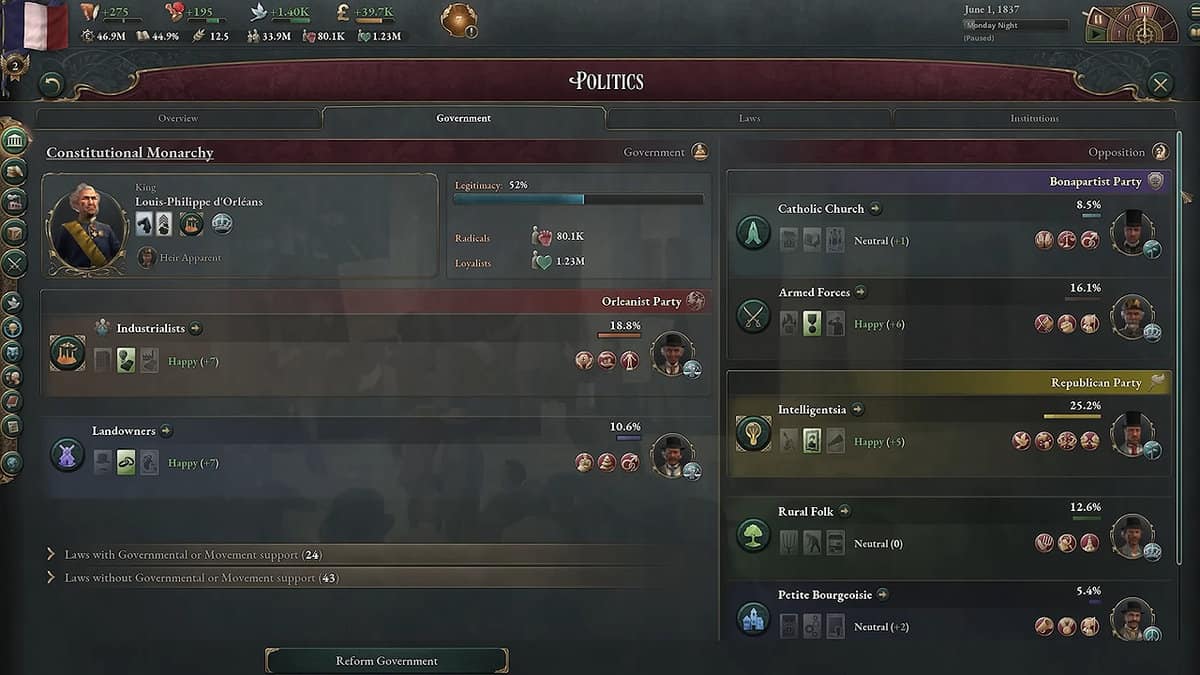 Just like in real life, Victoria 3 features a life-like political system that plays a major role in the stability of your country. In this game, imposing new laws is in your hands, but there’s a complicated mechanism behind it. Understanding that mechanism properly will help you make the right decisions. Otherwise, your country will fall to ruin.

Imposing new laws, just as in real life, will require your natives’ approval. These natives/countrymen that decide whether they like the new laws or not are called Interest Groups.

Imposing new laws with the approval of these Interest Groups is the most suitable option. If laws are forcibly imposed, however, they might start a rebellion and the government could be overthrown.

It is therefore necessary to manage your country’s Interest Groups. There are many ways to do this, for example, you can shift the political interests of your government gradually rather than at once, or you can manipulate the people that have major political clout.

In this guide, we’ll be looking at how to manage Interest Groups and how they work in Victoria 3.

Interest Groups are basically a group of pops that resemble shared interests in their country’s political matters. There can be many Interest Groups in your country, each with a different set of views, and a different name depending on the country.

Here’s a list of all the common interest groups in Victoria 3 as well as their console IDs to help you modify their behavior through console commands.

Each of these Interest Groups will prefer a different version of the country. For example, the Intelligentsia will be more in favor of the academia, but the Rural folk will favor lower tax impositions.

There are many factors that come into play when the pops decide to join an Interest Group as well. They can be wealth, professions, education, and whatnot. The main factor that determines this though, is the occupation of the pops i.e. if they are nearer to the Group.

Naturally, an Interest Group would be incomplete without a leader. This leader can take hold of the country’s government if it isn’t a monarchy. Moreover, each leader has his own specific Ideologies and Traits that can alter the Interest Group’s motto.

For this purpose, you need to select the Properties menu from the game settings. In the General tab, you find a Launch option box at the bottom and type “–debug_mode” and then start the game.

Each Interest Group has a preference for what kinds of laws should be enacted depending on their beliefs and benefits called Ideologies. These Ideologies generally come with the leader and may change with a new one.

Moreover, the leaders’ ideologies may also change as the course of the game changes, depending on the playstyle. In some areas, there can also be special/unique ideologies due to a specific culture or religion. An example of this Interest Group is the one that follows Confucius’s’ Ideologies – Confucian Scholars.

The Interest Groups have yet another mechanic called their Traits, which are directly affected by Approvals. Traits may be positive or negative depending on whether your laws are in accordance with their beliefs or not. If they are positive, then it means that they are happy, and vice versa.

If the Interest Group’s Approvals exceed 5 or 10 then they will receive their first positive and then the second one respectively. If, however, their approvals fall below zero or -5, they will receive a negative Trait.

These positive and negative traits will make a huge impact on the Interest Group’s happiness with your leadership. If their Traits aren’t looking well, one or more Interest Groups may start a civil war with the help of other countries.

Depending on how much the Interest Groups approve of your laws, each one of them will have an Approval Level. There are many factors that can change this besides laws though.

Your decisions and steps taken in some events might also affect the Approval level of the Interest Groups if they aren’t in accordance with their beliefs. Moreover, it can also depend on the ratio of radicals to loyalists in their own group.

The number of Loyalists and Radicals must be kept in check. If the Radicals exceed in number due to higher political power, the Approval Level of the Group will fall.

Clout is basically a measure of a particular Interest Group’s Political Power. The higher their clout, the more powerful they are and the more effect they have on the government of the country.

It is also necessary to keep a particular group’s Clout in check. If more Interest Groups with lower Clout constitute your government, it might not be considered legitimate, which will cost you radicalism in return.

Clout, and hence, political power, I majorly affected by how rich the Interest Group is. If the Group has a large number of Pops that are wealthy, then their Clout will increase respectively and vice versa. Using this mechanism, you can also increase the Clout of a given Interest Group, you can increase their wages to do so.

There are three levels of Clout an interest group can have.

You can either Bolster or Suppress a particular Interest Group in question via the Bolster and Suppression actions in the Group’s overview menu. The extent to which you can do either of these actions is determined by the level of your law of Free Speech.

If the Free Speech laws are harsh, then these actions will have a greater impact, but they won’t work if you have Protected Speech laws in effect.

Bolstering involves increasing the attraction of a particular Interest Group to the Pops, which will result in more of them joining it.

Suppressing involves decreasing the attraction of a particular Interest Group to the Pops, which will result in more of them leaving it. The only difference is that you cannot Suppress an Interest Group that is currently in power.