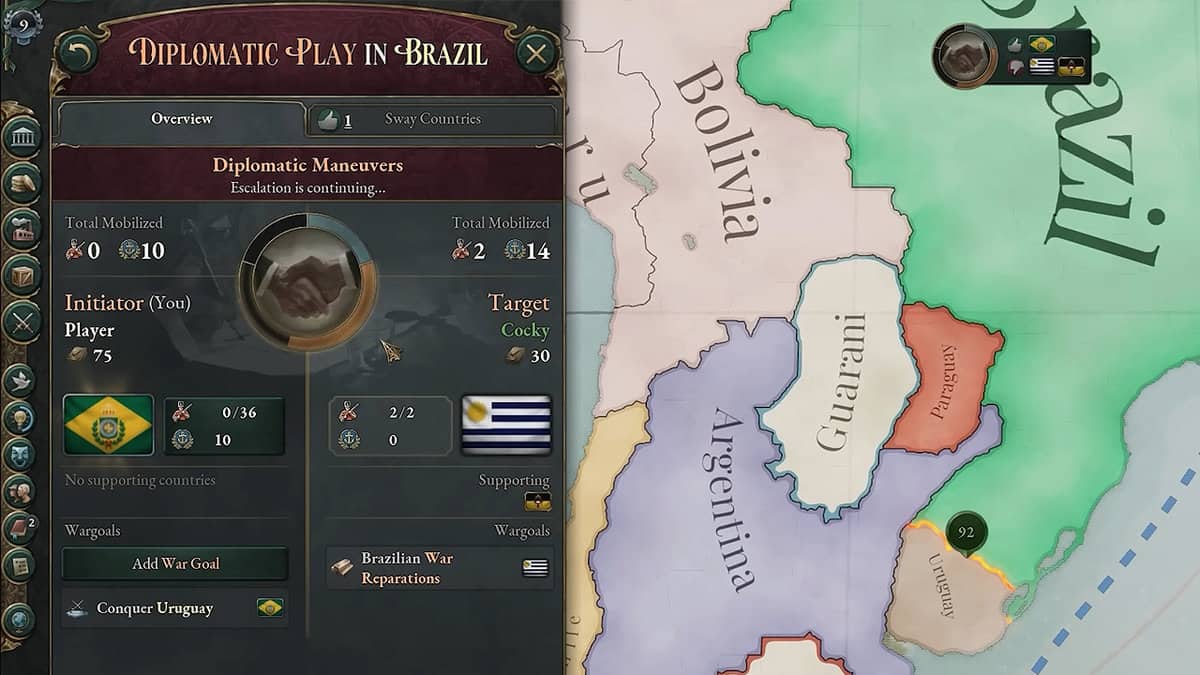 Diplomatic Plays are how you declare war on another country in Victoria 3.

There is a whole system involved when you are thinking of going to war. It is not as simple as simply clicking on a country to attack.

Diplomatic Plays start a motion of events where your actions and decisions to follow (as well as those of the other countries involved) decide if a war will break out or not.

The following guide will explain more about Diplomatic Plays in Victoria 3.

How to start Diplomatic Play in Victoria 3

Diplomatic Plays, as the name suggests, involve a lot of diplomacies where you negotiate terms. Do note that when you start a Diplomatic Play with a country, you start a countdown. You must reach a conclusion by the time the timer ends to ensure that diplomacy turned in favor of your country.

There are three steps involved during a Diplomatic Play in Victoria 3.

Victoria 3 offers you a plethora of reasons to initiate a Diplomatic Play with a hostile country. It is not always about capturing more land or expanding your borders. You can hail a neighboring country to make other demands, such as abolishing slavery laws, ceasing hostile activities against an ally of yours, opening their market for trade, changing their trade routes, or among other demands.

The first phase of a Diplomatic Play is relatively straightforward. You select the country in question to make your demand. There is nothing more to it. You can, though, rethink your long-term goals before angering one of your neighboring countries.

The second phase of diplomatic maneuvering is where everything happens. It is also a bit more complex than the first phase, forcing you to go back and forth.

A country that sides with your conflict might start mobilizing armies for you or send resources for your war efforts. However, if the hostile country manages to gain more support than anticipated, you might need to tone down your demands.

As stated previously, you will go back and forth during the second phase of a Diplomatic Play. You can even consider backing out altogether because once you enter the third phase, there is no going back. It will be war from there out.

If you reach the third phase, war is pretty much guaranteed. You will no longer be able to change or renegotiate any of your demands.

All countries involved will be gearing up to attack or defend. If you surrender here or back out, your country will lose Prestige and have to endure a lot of consequences in the long term.

Backing out will also mean that your country has to accept all of the demands put forth by the hostile country. That will take a serious toll on your economy.

How to use Diplomatic Plays in Victoria 3

Whenever there is a Diplomatic Play in motion in an area, a large round icon will pop up on the top-right side of your screen. Clicking on that icon will show you all of the countries involved in the conflict, their demands, their military strength, and such.

You will have an overview of the Diplomatic Play to have a fair idea of how things are going. Maybe you might consider siding a conflict because it has several advantages for your country. Sometimes you might want to make adjustments in your own country to help out an ally in their negotiations.

In Victoria 3, you use chits to bring countries to your side during a conflict. However, depending on the country you are playing with and your current rank, the number of maneuvering chits available will differ.

Head into the Sway Nations tab and use your chits to convince them to support your side. They might ask for something in return, which is also another thing to consider when starting a Diplomatic Play.

Remember that sending out your armies to the front lines will escalate the situation. It will impact your swaying abilities for the better or worse. That being said, sometimes getting an upper hand early on might have the country back down which can avoid a war.

In case you are not the one involved and someone in your region is, you will be called a secondary target in the Diplomatic Play. In such a case, you can either remain neutral and not take any sides or you can choose to ally with one side. It is your decision.

You cannot threaten a country without consequences. During your three-phase Diplomatic Play, your country will gain infamy depending on your demands.

If your actions are too aggressive, unfair, or are somehow impacting your allies in a negative way, you will gain a high infamy rating. That means your country has lost a lot of respect and sway in the world. A high infamy rating will also impact your trade, ceasing trade routes and preventing new trade deals to happen.