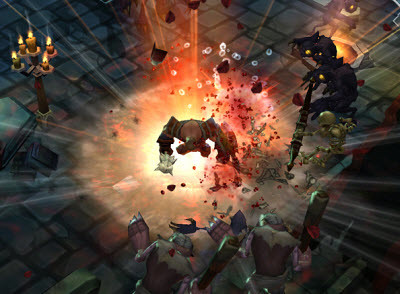 Torchlight 2 has four new classes for you to pick from. Every class also has a gameplay mechanic that is unique to it, i.e. The Charge Bar. The Charge Bar is a very important User Interface that bestows unique bonuses to each class after gaining the maximum number of charges.

Furthermore, in this installment of Torchlight 2 full-on Character Customization has been added to the mix. You can choose the gender of your character as well as apply some cosmetic changes to make your character stand out of the rest when you play the new online co-op.

Well, let’s not waste any time and dive straight into the first class of the game:

Berserker – BUILDS
The true hardcore class of the game. Berserkers are warriors, and they head into battle with the simple a plan – Attack. They have three types of playing styles, and each of them is represented by its own skill tree.

The Hunter tree is for melee attacks; the Tundra tree is for frost and lightning damage and Shadow tree lets you summon wolves in battles.

You can charge your berserker by inflicting damage by any means necessary. Once your charge bar fills up, you can enter into the Berserker rage mode which increases your chances to land a critical hit.

Do note that the duration of Berserker rage can be extended by putting some points into certain skills.

Outlanders – BUILDS
The Outlanders are the Kiters or the Ranged attackers of Torchlight 2. These fellows are nomad explorers, and use ranged weapons like pistols, shotguns and rifles. That does not mean they are not well-equipped in other forms of battle. They wield a special kind of magic boomerang called the Glaive, and it can be combined with many different types of passive skills and summons.

Embermage – BUILDS
Simply put the Embermage are Torchlight 2’s variation of the mage class you find in different RPGs and MMORPGs. This class deals elemental magical damage over a range. They are mostly like the Alchemist from the previous game but unlike them, the Embermage does not draw their magic directly from the Ember.

The powers of the Embermage are divided into three skill trees: Inferno, Frost and Storm. Their charge bar is filled by casting spells and when the Charge bar fills up your spell, it becomes more potent and dangerous. However, more spells you cast the more your mana depletes so micro management is the key essence of this class. After all you do not want to have a maxed out Charge Bar but zero mana.

Engineer – BUILDS
Engineers are the total package in Torchlight 2. They have the brains and the muscle to go along with it. They not only utilize heavy melee attacks but also deploy cannons, battle wenches and bots to help them in battle. In battle, they can equip various weapons from two-handed hammers to swords, etc.

Like all other classes engineers also have their skills divided into three groups. Blitz tree buffs up the Engineers’ two-handed melee talents, Construct tree which improves his robots and Aegis tree enhances the Engineer’s shields and one-handed swords.

Each use of a basic attack will grant the Engineer charges that he can use to power up his abilities. His spells will either give him charge or take it away in order to buff the spell.