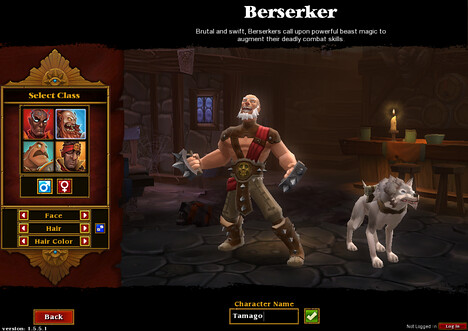 Enemies in Torchlight 2 will be shivering with both cold and fear as the brave and rampaging Berserker readies his weapons to unleash brutal chaos upon them.

With a set of powerful dominating abilities that amplify his damage output and give him the ability to crush even the hardest of defenses, the Berserker class is ruthless, merciless, and amazingly unsubduable.

For more help on Torchlight 2, read our Embermage, Engineer and Outlander Builds.

This guide will give you 4 different builds for the Berseker, each at level 100 with 145 skill points and 495 total stat points. Note that the Stats of the builds are not hard-and-fast, and are meant only to give you an idea of the point distribution.

Welcome to the world of tanking! This badass tank build is a little slow to start off, but can progress on to become quite overpowered as you level up.

The good thing about the Berserker is that he can benefit from Vitality, Strength, and Dexterity. Strength, out of these three, is the least issue here. This may sound surprising, but it really isn’t because Blood Hunger is your primary objective, and for that you need some heavy critical strike chance.

Thus, it’s essential to build a decent amount of Dexterity. Of course, Vitality still gets the most favor because of the tanking nature of the build.

When it comes to the skills, Raze is your bread-and-butter damage source. This, when combined with powerful skills like Shadow Burst and Wolf Shade, will ensure that you are doing a large amount of damaging and also keeping yourself healthy.

Savage Rush has been invested in only because it makes you so fast, which is really an added bonus for a strong tank (especially in co-op games). Though you have to do some investment in Focus to sustain its mana cost and bring the damage up to a respectable level.

Battle Standard is a powerful defensive ability that will again assist in co-op games and also in solo. Shred Armor should ensure that enemies become weaker and weaker as you attack them, which can really stack up well against more difficult foes.

This is the most conventional way to play the Berserker – as a high damage dealing DPS character. Though this may not be the wisest approach in co-op games, it can be used during a solo run quite well.

The main damage sources in this build are Eviscerate and Battle Rage, which combine brilliantly with your Strength, which is all the way at 300.

This will ensure that you are doing 150% additional weapon damage to your enemies, and when this effect is combined with that of the bleed from Eviscerate, and the Shred Armor from the Shadow passives, it will do some serious damage in very little time.

Shadow Burst is a short dash which stuns enemies, giving you enough time to either attack them, plan your moves, or at least to escape from there. It heals 10% of your max health and 60% when maxed.

Obviously, this build will require more aggressive methods of play, which can get a little risky against tougher enemies while soloing.

However, the Berserker isn’t named the way it is for no reason, and hence there is every reason to go all out with this kind of a build.

No, you haven’t accidentally landed into the world of the Embermage to find out a Frost caster build. This is actually a caster build for the Berserker. Funny as the class might seem with a wand, the Berserker is actually equipped with some really powerful ice-based skills in the Tundra tree.

You might struggle initially in the build, but it can later on become quite powerful – so powerful that you might even laugh at the site of a wand-wielding Berserker causing havoc.

The obvious source of damage comes from the Tundra skills, and also the strong investment in the Focus stat. For the requirements of the Berserker in general, we’ve also added a good amount of points in Strength, though Dexterity gets a larger priority because of the associated critical strike chance.

You wouldn’t really need too much Vitality when you are in a more stable phase on the build, but you shouldn’t be surprised to see yourself putting in some points in the stat early on.

Your main skills here are Frost Breath, Northern Rage, Permafrost and Glacial Shatter. It can be a little difficult to get Permafrost to have its effect in the best manner possible, but it is nevertheless an excellent AoE skill that should really prove itself. Don’t let the wand(s) get stuck in your beard!

The damage done by Frost Breath increases buff. The damage bonus from Frost Breath applies after your entire damage is calculated. The minimum and maximum damage range of Northern Rage is huge and impressive.

Coming back to the more orthodox stuff, we get a build that is plain and simple, with nothing to give in the Tundra tree and much to take use of in the Shadow and Hunter trees (former more abundant).

For the sake of getting a heck lot of critical chance, you want to be increasing your Dexterity as much as possible. If your point distribution and management is good, you should actually be able to compensate for the lack of points in Vitality through the amazing Blood Hunger passive.

You’ll have around 45% critical hit chance with 333 Dexterity, meaning that on average you will critically strike every 2nd hit, which is quite fantastic in my opinion.

Eviscerate is your primary source of DoT and heavy damage in this build, and you also get to utilize the 6 passives here, which will greatly add to your effectiveness in-terms of sheer damage and also greatly improve your critical strike’s damage output.

It’s an overall powerful build which may lack in survivability early on but can more than make up for it with some heavy critical damage in the later stages.