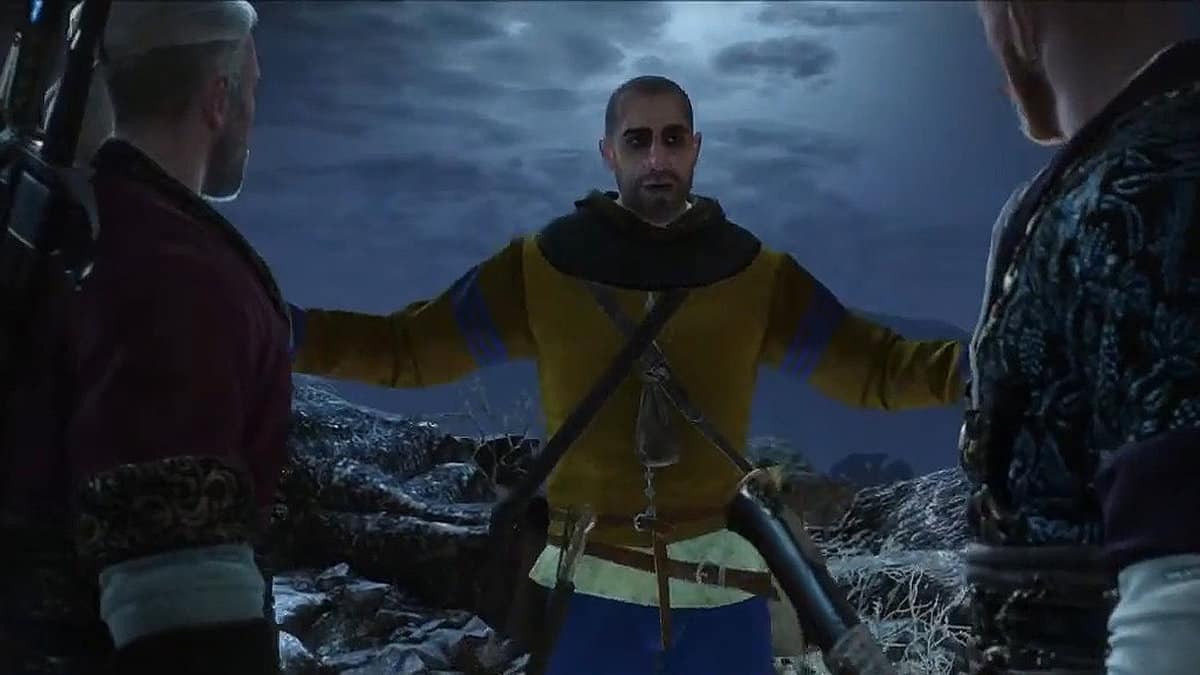 Whatsoever a Man Soweth is the final quest of the Hearts of Stone expansion pack in The Witcher 3: Wild Hunt. This is where Gaunter O’Dimm reveals his true self as Master Mirror to finally claim Olgierd von Everec’s soul in accordance with the pact they signed a long time ago. That is unless Geralt decides otherwise.

You will have a choice to make here. You can either save Olgierd by taking on Master Mirror yourself or let Master Mirror collect his soul.

The following guide will walk you through the entire Whatsoever a Man Soweth quest, explaining each choice and consequence along the way.

Once you complete the third task given to you by Olgierd in Scenes From a Marriage, you need to return to the Alchemy Inn. However, you will find Gaunter over there instead of Olgierd.

By this point in the storyline, you will have a fair idea that Gaunter O’Dimm is not normal. As further proof, Gaunter will stop time to show just how powerful he is.

He will then ask you to find and bring Olgierd to the Temple of Lilvani to fulfill their contract. Afterward, he will leave but not before killing a man who rudely interrupted your conversation.

Make your way to Shani’s clinic but she will know nothing about where Olgierd is. She will suggest speaking with Professor Shakeslock who can be found at the Oxenfurt Academy.

This is an optional objective that unlocks an alternate ending. However, it can be skipped to go directly to the Temple of Lilvani for the standard ending.

If you have chosen to talk to Professor Shakeslock, then you need to travel to the Oxenfurt Academy. Shani will speak with the guards to let her inside but they will stop Geralt. Fortunately, Shani will assist in helping find Geralt an alternate route inside.

Go to the bridge and take a dive in the river. Follow the academy wall and you will find a bit of land you can climb on. You will find some Drowners on the way so just cut them down since they aren’t that big of a threat.

Shani will then dangle a rope down from the wall which you can use to climb up. A cutscene will play after Shani exits leaving you on your own. You will find a group of Witch Hunters outside the professor’s residence, which means, they need to be taken care of.

Once done, approach the Professor’s door only to find it locked. But notice a ladder nearby you can use to climb up to a balcony. Use your Witcher Senses to discover the door can be blasted away so use Aard to do that and enter inside.

Investigate the area if you wish but the main objective is the Professor down below who will be inside a magic circle and will refuse to leave. However, you can talk to him and make sure that you do it thoroughly. Use all the dialogue options available and learn all that you can.

When the talk ends, a cutscene will play and the Professor will be no more. At this point, all you can do is leave and go to the Temple of Lilvani.

Whether or not you spoke with the Professor or not, you will eventually arrive at the Temple of Lilvani. The temple is located inside the caves located east of Toderas. If you previously completed the Phantom of the Trade Route contract, you might be familiar with the area and can fast-travel here.

After successfully getting inside the Temple of Lilvani, Geralt will reach an area with the Moon drawn on the ground. Olgierd will be present and you can give him Iris’ rose or a painting of it depending on what you acquired in the previous quest.

Gaunter will then make his appearance after which he will attempt to claim Olgierd’s soul and two timed decisions will pop up. You can either:

Take note that if you do not speak with Professor Shakeslock before reaching here, there will be no choice to side with Olgierd. Gaunter will directly proceed to claim his soul.

Side with Gaunter (Master Mirror)

If you decide to leave Olgierd to his fate, Gaunter will present you a list of rewards to choose from. You can only choose one, so choose wisely.

Geralt can also request Gaunter for help in finding Ciri, but he will refuse by saying there are some things bigger than him. Instead, he will give you clues to obtain a good ending. This is only useful IF you play this quest before completing Isle of Mists.

If you choose the option to save Olgeird from Master Mirror, you will be faced with a riddle. The only option forward is to solve the riddle within the time limit.

Geralt will be taken to O’Dimm’s world where he will hear the riddle he has to solve. A timer will appear at the top corner of the screen and the game begins.

From the temple, go straight then onto a bridge and take a left at the fork when the path splits. Move forward, ignore all enemies, and sprint past them. They are meant to distract you.

In order to retrieve the Venomous viper silver sword, head on over the stairs with the glowing red area. Climb them and you will find the sword lodged up in a stone.

After retrieving the sword, head towards the large mansion clearly visible in the background. It is better to just ignore and run past all enemies since it saves time.

Enter the house only to find the floor breaks apart and you will fall down into a room filled with mirrors. The answer to the riddle is a mirror. So whenever you approach one, it will break apart.

You will enter a wide area with multiple mirrors but there will be a dried-out fountain in the middle of the area. Instead of approaching the mirrors, go to the wall near the fountain and activate your Witcher Senses to reveal it can be broken apart.

Use Aard to do so and water will flow. Once the water creates a pool, look into it to solve the riddle. A short cutscene will play after which you will have woken up back in the real world.

You will then speak with Olgierd and get him up to speed. He will thank you and give you his sword Iris as a reward. Whatsoever a Man Soweth quest will conclude here with a reward of 200XP.