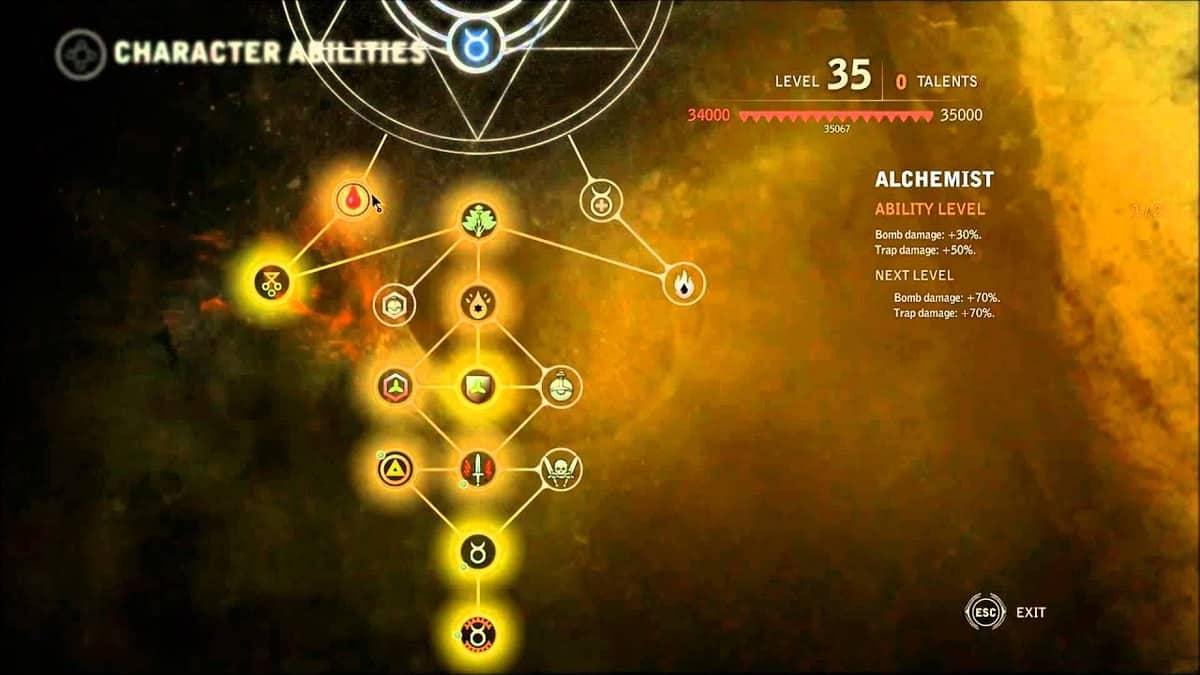 The Witcher 2 skills guide will walk you through various skills and abilities of the characters, character development, and talent trees. You can use this guide to effectively use different abilities and upgrades that you will have access to in The Witcher 2.

You can’t survive with the starting character Geralt as the difficulty of enemies increase. Once you have accumulated enough experience points, you will level up your character. For each level, you will be awarded specific number of talent points. Which you can invest in to improve various abilities of Geralt.

You can meditate anywhere in The Witcher 2, once you are in the meditation mode, you can access Alchemy, the use of mixtures, and the rest of character options. The ability tree in The Witcher 2 is divided in four different paths: Training, Swordsmanship, Alchemy, and Magic.

Each ability branch includes a number of specific skills. Use of abilities is subjected to conditions you will come across. You can invest talent points as long as you meet the prerequisites. You should intelligently use the talent points since you can’t unlearn the abilities in Witcher 2.

There are two level upgrades per ability. The most powerful ability bonuses come at the end of each ability branch. There won’t be enough talent points available to get all the abilities to maximum so you should definitely think twice before taking any route.

Since not enough talent points to develop all the ability paths to the maximum, you should definitely think twice about how much talent lies in her ability which branch.

This guide will help you decide which ability you should invest in, what are the benefits of using that ability and how you can effectively make the best use of available talent points.

Before you go on to invest in swordsmanship, magic or alchemy, you need to invest minimum of six talent points in training branch of skills tree.

If you are more of an impulsive guy who likes to throw himself into the combat and rely on aggression to get things done, you should most probably go all in, and invest all your talent points in Swordsmanship.

It will increase the damage of the swords in combat, increase the effectiveness of hand-to-hand combat, blocks will be more efficient, and greatly enhance the probability of landing the critical hit on opponents.

Alchemy as we know it is the mixture of different potions. The Witcher 2 Alchemy guide will provide you a closer look on different mixtures you can create and acquire in The Witcher 2 and also tell you the effectiveness of each mixture you create.

Using Alchemy Geralt can fight through potions and mutagens. The more talent points you invest in Alchemy, the more effective will be the effects of mixtures and time they will retain their effect will also greatly increase.

Read our detailed The Witcher 2 Alchemy Guide through the link.

Magic branch of ability tree allows sorcerers characters to improve their abilities. In addition to improving your abilities, you can unlock additional effects such as numbness, cremation or damage reflection.

The Magic Path also grants you access to a sixth sorcerer character –
heliotrope – which enables you to influence time and space. It creates a barrier that slows down your opponent, which can prove very handy in combat.

Mutagens are powerful mutation-triggering agents. They allow you to raise your abilities even further. Mutagens can be acquired in two ways: you can loot one from a defeated enemy or you can create one as a byproduct of alchemy. To undergo mutation, enter meditation, and then select the ‘Character’ option and find an ability
that has a mutagen slot.

The mutation cannot be reversed. Mutagens usually take one of three forms: lesser, basic and greater. Each of these forms raises the character’s statistics, but by a different amounts.

Range mutagen
Increases the range of the Aard, Igni and Axii Signs.

Feel free to ask any questions or provide feedback about this guide. If you find anything missing, point out and we will add that in this guide.