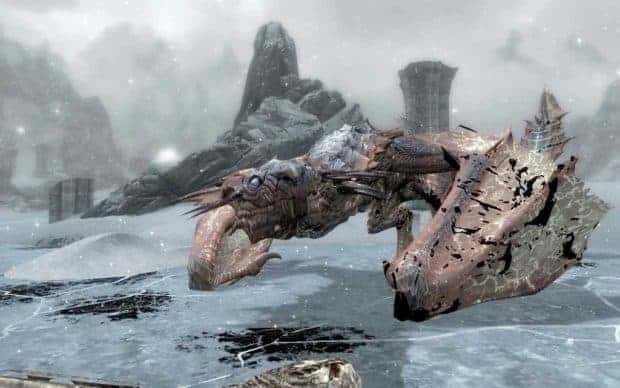 Skyrim’s new DLC Dawnguard is bringing more reasons for us gamers to further explore the rich and fantasy-filled world that we have come to love so much. Skyrim Dawnguard Dragon Shouts are important to the gameplay and the player and learning them will help you improve your combat skills.

We’ve already discussed the new Skill Trees, enemies, weapons and crafting of the game, but what good is all that when the most iconic element of Skyrim – the Dragon Shouts – are not included?

Well, the good news is that Dawnguard also brings within itself three new Dragon Shouts, each having a unique identity. But the coolest thing of all is that one actually allows you to summon an undead dragon. Read on for more details on the shouts, their effects, and where and how to learn them.

There are different Dragon Shouts you can learn in Skyrim Dawnguard Dragon DLC. You can learn them and use them as you see fit. The following information will help you understand and learn the new Skyrim Dragon Shouts.

There are 12 quests spread across Skyrim and other areas. There are 9 different side quests for each faction and even though some of them are repetitive, all of them are fun to play.  There are 80 characters introduced in the Dawnguard Dragon DLC for Skyrim.

Drain Vitality
A Dragon Shout that steals health, stamina, and magicka from an enemy.

The words of this Dragon Shout are available quite early in the expansion, with its first word located in the first dungeon encountered in Dawnguard DLC.

During the quest ‘Awakening’ you will rescue some mysterious woman. After this, you’ll arrive at an arena with descending steps. Skeletons will come up the steps after you – clear them out and keep looking at the right wall.

Eventually, you’ll find a Dragon Wall on the right side, from where you can learn the first word of the Drain Vitality. Finding the first word gives you 5 points of damage each second to stamina for 30 seconds, along with a 0.8 stagger effect.

The second word is located in the middle of the frozen lake at Forgotten Vale. Don’t worry, as you won’t have to make a trip specifically for the shout; you’ll travel to Forgotten Vale as a part of the quest-line.

Be wary though, as after collecting this word, two dragons will attack you!

Finding the second word gives you 5 points of damage each second to stamina and magicka for 30 seconds, along with a 0.8 stagger effect.

The third place is Arcwind Point, a place that was visitable in original Skyrim. Arcwind Point can be found far to the southwest of The Rift area, west of Riften. The Dragon Wall is left to an altar in the area.

Finding the third word gives you 5 points of damage each second to stamina, magicka and health for 30 seconds, along with a 0.8 stagger effect..

Summon Durnehviir
During the quest “Beyond Death”, Durnehviir teaches the Dragonborn all of the three words of the shout. This shout can only be used once you’ve unlocked all three Words of Power with dragon souls.

This shout summons the undead dragon Durnehviir, from the Oblivion plane of Soul Cairn. This shout is obtained after traveling to Soul Cairn, in which you fight Durnehviir and kill him. Later, you will meet him again and he will grant you this shout.

This shout is almost automatically granted as a part of the quest-line, so you have little to no worries regarding its search.

However, it is a little difficult to use, as compared to the Odahviing shout in the original Skyrim quest-line. This shout is more like a spell instead of a summon – the dragon won’t hover over and eventually land on the selected location, as was Odahviing’s case.

Instead, he’ll be there for you exactly in the area you were ‘aiming’ at while shouting. So, for it to work properly, you must actually have a very large area available, upon which you will have to use the shout to successfully summon Durnehviir.

Soul Tear Shout
Soul Tear ‘rips’ the soul out of an enemy, turning them into an ally.

To obtain it, you must first have the ‘Summon Durnehviir’ shout. Use it to summon the undead dragon Durnehviir. Every time you summon him in Tamriel, you can learn a word of the Soul Tear shout. Fast travel to different locations between the summons to learn all three words of this shout ASAP.

Soul Tear is considered as a very powerful and dangerous shout as it places enemies underneath the Dragonborn’s control by ripping the opponent’s soul out of his body just to fill soul gems in it, which makes the opponent rise from the dead, becoming its ally.

This shout can even knock weapons off the opponent’s hands, making them open for damage. Just make sure you aren’t too close to the Dragonborn when aiming the crosshair away from the body.

Soul Cairn Summon is a special dragon shout that can’t be directly learned by the player. The only way to learn this shout is when the player uses console commands.

This shout is not common in the game as it is only used by Durnehviir in battles for summoning a Boneman, Mistman and one Wrathman.

Keep in mind that the Multiple Summon perk is required for this shout to work properly since there’s a limited number of creatures summoned by this shout.

This was our Skyrim Dawnguard Dragon DLC Dragon Shouts Guids if you have any questions take to the comments below.