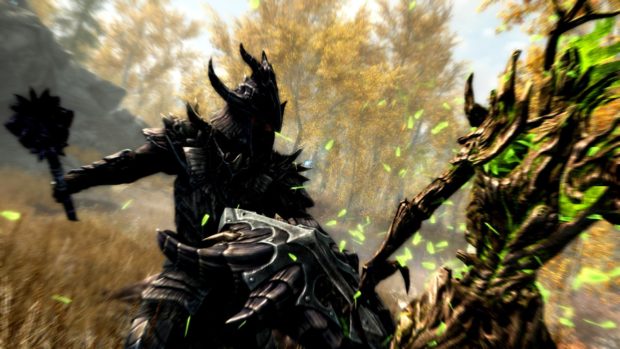 Having weapons while exploring the world of Skyrim is important unless you are a mage and like to cast spells. As beautiful the world is, it is also dangerous and there are various weapons that players can use to defend themselves and this Skyrim Unique Weapons Locations guide help you track down or forge Unique weapons in the game.

Skyrim doesn’t differ from weapon formula that has been laid down in previous Elder Scrolls games. All weapons have a unique appearance and style which makes some of the unique weapons in the game even more, desirable and that is where our Skyrim Unique Weapons Locations guide comes in.

You can choose among swords, axes, maces, staves, bows, and shields – Which can also be used to bash enemies. Among these weapons, Bows are relatively rear in Skyrim, so if you are an Archer, make sure you stock a large number of bows before going out on a dangerous quest.

All weapons in Skyrim have a damage stat and block stat. These two stats decide how good a particular weapon is and how good it will go with a particular Character Build.

You can also dual-wield in Skyrim, but it compromises your defense a bit, so you need to the skilled defender if you are to go down that path. You can dual-wield sword/shield, sword/torch, sword/axe, spell/mace, duel spells, block spell (ward)/axe and many more.

There are some weapons in Skyrim that have unique stats that are very hard to replicate and this Skyrim Unique Weapons locations guide will list all the unique weapons in the game and where to find these weapons.

Alessandra’s Dagger
Location. Hall of the Dead in Riften
You will get this weapon during Quest – Pilgrimage.

Blade of Sacrifice
Location. Sacellum of Boethiah
You will get it from Priestess of Boethiah when you complete Daedric Quest – Boethiah’s Calling.

Bloodthorn
Location. Deepwood Redoubt
You will find it on the body in the upper level platform of Hag’s End.

Borvir’s Dagger
Location. Journeyman’s Nook
You will find it lying next to Borvir’s body near the Alchemy lab inside the domed ruin.

Kahvozein’s Fang
Location. Random Dungeon With Dragon Priest
It will be given to you by Tolfdir during College of Winterhold Radiant Quest – Alternation Ritual Spell.

Mehrunes’ Razor
Location. Shrine of Mehrunes Dagon
You will get it as a reward for completing Daedric Quest – Pieces of the Past.

Nettlebane
Location. Orphan Rock
You will get it when you complete Temple Quest – The Blessings of Nature.

Rundi’s Dagger
Location. Rundi’s Mistake
On the edge of the small altar.

Shiv
Location. Abandoned House in Markarth
You will get it as a reward from Grisvar when you complete the Side Quest – No One Escapes Cidhna Mine.

Valdr’s Lucky Dagger
Location. Moss Mother Cavern
You will get it from Valdr when you complete Hunter and Hunted quest.

Horksbane
Location. Horker Island
This item can be found by the corpse of Saden.

Lunar Iron Mace
Location. Silent Moon Camps.
Once you’re a level 2, the weapon will randomly spawn near the Lunar Forge.

Lunar Steel Mace
Location. Silent Moon Camps.
Once you’re at level 4, the weapon will randomly spawn near the Lunar Forge.

Mace of Molag Bal
Location. Abandoned House in Markarth
You will get it as a reward for completing Daedric Quest – The House of Horrors.

Prelate’s Mace
Can only be obtained via a cheat code (button prompts).

Akaviri’s Sword
Location. Dexion Evicus
This weapon can be looted from Dexion after the ‘Prophet’ Quest.

Amren’s Family Sword
Location. Bandit Camp
You will find it in a random bandit camp.

Bolar’s Oathblade
Location. Shrine of Talos
Can be found in the Bloated Man’s Grotto.

Ceremonial Sword
Location. Volunruud
It is one of the weapons needed to open the Elder’s Cairn Door in the dungeon – Inside Volunruud.

Chillrend
Location. Riftweald Manor, Riften
You will have to steal it from the locked display in Mercer’s study room during Thieves Quest – The Pursuit.

Dawnbreaker
Location. Killreath Ruins by Statue to Meridia
Complete the Daedric Quest – The Break of Dawn and you will be given this weapon as a reward for your effort.

Eduj
Location. Volunruud
You may find it in possession of Knevel the Tongue at the end of this dungeon.

Gauldur Blackblade
Location. Folgunthur
It is wielded by Mikrul Gauldurson at the end of this dungeon. Loot the remains and it will be added automatically in your inventory.

Ghostblade
Location. Ansilvund
Get it from Fjori and Holgeir at the end of this dungeon.

Grimsever
Location. Mzinchaleft
Help Mjoll The Lioness and retrieve this weapon. She will ask you to take Grimsever’s Return quest, agree, and then you can take this weapon.

Herebane’s Courage
This item can only be obtained via console commands.

Hjalti’s Sword
Location. Random Dungeon
Another weapon you will find in a random dungeon.

Miraak’s Sword
Location. Apocrypha
Can be obtained from the corpse of Miraak at the conclusion of the ‘At the Summit of Apocrypha’ Quest.

Nightingale Blade
Location. Winterhold
Complete Thieves Guild Quest – Hard Answers and you will be rewarded this weapon by Karliah.

Red Eagle’s Bane
Location. Rebel’s Cairn
Get it on a pedestal on your way out of Rebel’s Cairn after having slain Red Eagle.

Red Eagle’s Fury
Location. Sundered Towers
Can be picked up after being dropped by the Forsworn Briarheart.

Soulrender
Location. Gyldenhul Barrow
Obtained at the conclusion of the ‘Deathbrand’ quest.

The Pale Blade
Location. Frostmere Crypt
You will find it in possession of Ra’jirr at the end of the dungeon.

Vilkas’s Sword
Location. Outside of the Meadhall.
Defeat Vilkas in a friendly spar.

Windshear
Location. The Katariah
You will find it embedded in the far end of the forward mast.

Ghorbash’s Ancestral Axe
Location. Random Dungeon
Another weapon you will find in a random dungeon. When you find it, Ghorbash will become your follower.

Notched Pickaxe
Location. Throat of the World
You will find it on the rock face on the highest elevation of these mountains.

Okin
Location. Volunruud
Second weapon that you may find in possession of Knevel the Tongue.

Poacher’s Axe
Location. Halted Stream Camp
You will find it on an Orc near this forge.

Ulfric’s War Axe
Delivered to you by Ulfric Stormcloak.

Drainblood Battleaxe
Location. Labyrinthian
You will come across a Spectral Draugr in Labyrinthian during College of Winterhold Quest – The Staff of Magnus, who carries this weapon.

Steel Battleaxe of Fiery Souls
Location. Ironbind Barrow
It is attached to the back of the throne at the end of this dungeon.

The Rueful Axe
Location. Rimerock Burrow
You will find it during Daedric Quest – A Daedra’s Best Friend.

The Woodsman’s Friend
Location. Lake Ilinalta, The Conjuror’s Altar
You will find it southwest of the altar, by some cut logs, next to a dead body.

Tsun’s Battle Axe
Can only be acquired through console commands.

Wuuthrad
Location. Skyforge in Whiterun
Forged by Eorlund, you get it when you complete Companions Quest – Glory of the Dead.

Balgruuf’s Greatsword
Location. Warmaiden, Whiterun
You will get it as a reward from Adrianna Avenicci when you complete Greatsword for a Great Man quest.

Bloodskal Blade
Location. Bloodskal Barrow
It can be found near the remains of Gratian Caerellius.

Shagrol’s Warhammer
Location. Followstone Cave
You will find it on Giant’s Grove during Daedric Quest – The Cursed Tribe.

The Longhammer
Location. Liar’s Retreat
Loot bar owner’s corpse to get this weapon.

Trollsbane
Location. Cradle Stone Crag
You will find it on the corpse of Frofnir Trollsbane.

Volendrung
Location. Fallowstone Cave
You will get it when you complete Daedric Quest – A Cursed Tribe.

Dwarven Black Bow of Fate
Location. Kagrumez
On a rack in the southeast room.

Glass Bow of the Stag Prince
Location. Ramshackle Trading Post
Can be obtained from Falas Selvayn.

Karliah’s Bow
Can only be obtained through console commands.

Nightingale Bow
Location. Bronze Water Cave
Complete Thieves Guild quest – Blindsighted and you will get this weapon as a reward.

Firiniel’s End
Location. Solitude
You will find it during Dark Brotherhood Quest – Bound Until Death. Gabriella will leave it on a balcony overlooking the Temple of the Divines during the quest. You can then pick it up.

Froki’s Bow
Location. Graywinter Watch
Near the tent on the back of the cave, by the barrel.

Aetherial Staff
Can be forged at the Aetherium Forge.

Gadnor’s Staff of Charming
Location. Crystaldrift Cave
You will find it on top of the giant rock, by the body of Gadnor.

Halldir’s Staff
Location. Halldir’s Cairn
Kill Halldir at the end of the dungeon and get it.

Hevnoraak’s Staff
Location. Valthume
Kill Dragon Priest Hevnoraak at the end of the dungeon to get this weapon.

Miraak’s Staff
Location. Apocrypha
Can be obtained at the conclusion of the ‘Summit of Apocrypha’ Quest.

Sanguine Rose
Location. Misty Grove, Morvunskar
You will get it when you complete Daedric Quest – A Night to Remember.

Staff of Hag’s Wrath
Location. Darklight Tower
You can get it from Silvia at the end of this dungeon.

Staff of Magnus
Location. Labyrinthian
You will get it as a reward a the end of College of Winterhold Quest – The Staff of Magnus.

Skull of Corruption
Location. Nightcaller Temple
Complete Daedric Quest – Walking Nightmare and you will get this weapon as a reward.

Staff of Arcane Authority
Location. The Frozen Hearth In Winterhold
You will steal it from Malur Seloth during ‘A Little Light Thievery’ quest.

Rusty Mace
Location. Abandoned House in Markarth
You will get this weapon during Daedric Quest: The House of Horrors.

Spider Control Rod
Location. Understone Keep
You can get it during Thieves Quest – Hard Answers in Calcelmo’s Lab in a room to the side of the first chamber.

Wabbajack
Location. Blue Palace Pelagius Wing, Solitude
You will get it when you complete Daedric Quest – The Mind of Madness.

Dragon Priest Staff
Location. Skuldfn
You can get it from Dragon Priest Nahkriin near the portal to Sovngarde.

Staff of Tandil
Location. Random Dungeon
You will find it during College of Winterhold Radiant Quest – Arniel’s Endeavor