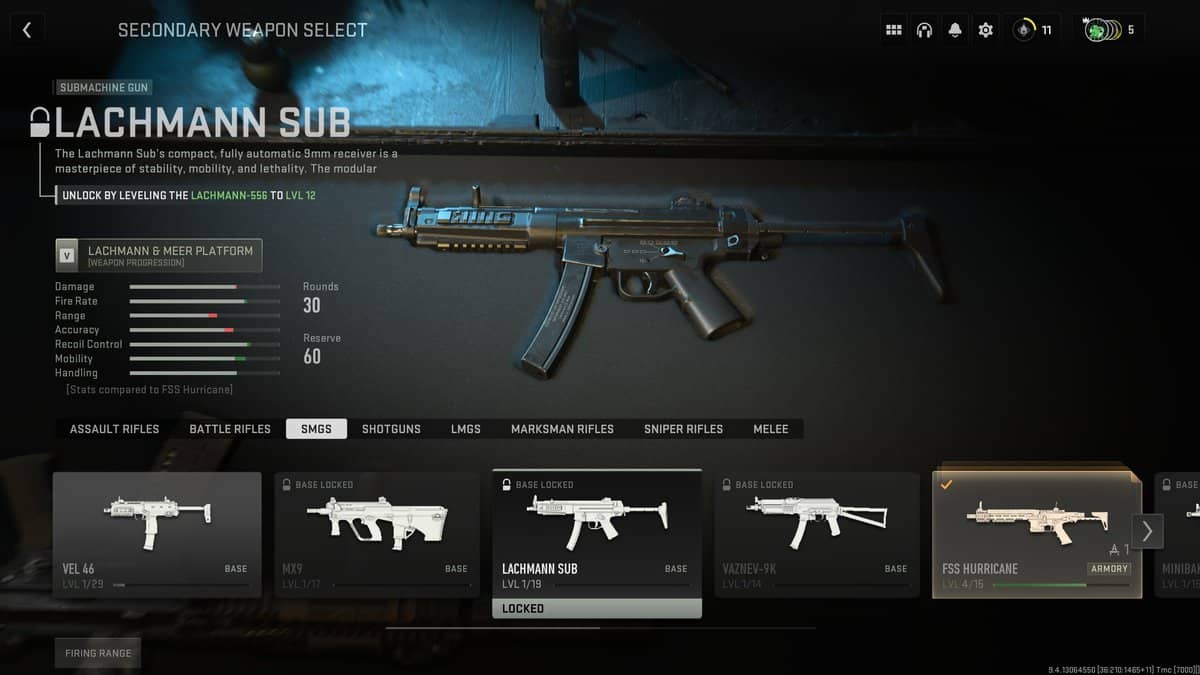 With unreal accuracy and devastating damage output, the Lachmann Sub will be your go-to weapon in any loadout in CoD Modern Warfare 2 for your multiplayer adventures and will give you outstanding reliability in times of distress.

Lachmann Sub belongs to the Lachmann Meer platform, and to acquire this bad boy, players must first unlock the Lachmann-762 Battle Rifle by reaching Level 17. This will open the Lachmann platform for you, and then you can proceed to use your Lachmann-762 until you manage to touch Weapon Level 16.

Once you do that, you’ll be unlocking the Lachmann-556 receiver. Use this receiver till you hit Weapon Level 12, eventually acquiring the Lachmann Sub receiver and allowing you to use MP5 in MW2.

To better understand how to benefit from the MP5 in Modern Warfare II, we’ve crafted this guide to learn how to unlock Lachmann Sub, the ideal loadout for it in Modern Warfare 2, and the class setup. So without further ado, let’s begin.

This MP5 or Lachmann Sub class setup for Modern Warfare 2 (2022) ensures you maintain weapon balance, have outstanding mobility, and can effortlessly shoot at close to medium ranges. The loadout caters to those who are fans of close combats and crowd control and want to clear out their enemies from the arena aggressively yet accurately.

The MP5 weapon itself boasts a reasonable rate of fire and is considered a beast, so to modify its performance, we have included Merc Foregrip, which will help improve its close to medium range performance by boosting the hip fire accuracy, recoil stabilization, and aim walking steadiness.

The inclusion of the Bruen Pendulum stabilizes the weapon to the next level by controlling the horizontal and vertical control, making Lachmann Sub (MP5) land maximum bullets at the target.

With LM Cronus Grip, we’ve ensured this class build intensifies your weapon stability and accuracy when you are aiming down the sights.

LM Stockless Mod and 40 Round Mag are necessary attachments for this class setup. Providing you with a boost in your aim down sight, sprint to fire, and movement speed. Additionally, you will have much better recoil control due to the included stock in this class.

We also went with the 40-Round Mag. Most SMGs come with pathetic magazines, and you will always find yourself reloading. This can mean life and death when you’re in an intense fight, so the 40-Round Mag should keep you covered for most of your engagements, and you can focus on running around faster rather than having to stop and reload every second.

The best secondary weapon with Lachmann Sub is the X13 Auto handgun. X13 has the potential to take down enemies quickly and efficiently.

You can convert it into a recoilless pistol and make it work as your secondary SMG. You will have the fire rate, accuracy, and control to take the fights away from the enemies.

The aggressive playstyle associated with this class is further improved by including X13 Auto as our secondary weapon.

The Scavenger and Double Time are perfect as base perks for our class. You need maximum ammo to keep pushing the enemies as an aggressive player. You will get a resupply of ammo from the dead players, and with double time, you can move quickly to obtain the objectives due to the increase in the tactical sprint and a 30 percent increase in crouch movement speed.

The boost in reloading and weapon swapping is crucial while playing the aggressive role for your team. To have this required boost, our bonus perk is Fast Hands.

You want to flank the enemies and surprise them by coming from unexpected places. The element of surprise, along with the aggressiveness, wins you many battles in MW2. So going with Ghost as the ultimate perk makes the most sense, allowing you to stay away from all the detecting devices of enemies.

The stun grenades are great to have as it helps you push in buildings and clear the passage for your team. You can get easy kills by stunning and pushing the enemies.

For lethal, Semtex is good as you can get extra kills by detonating the enemies. Battle Rage is essential for our aggressive play and helps regenerate health and provide resistance against the tactical. You can move away from difficult situations due to this perk.