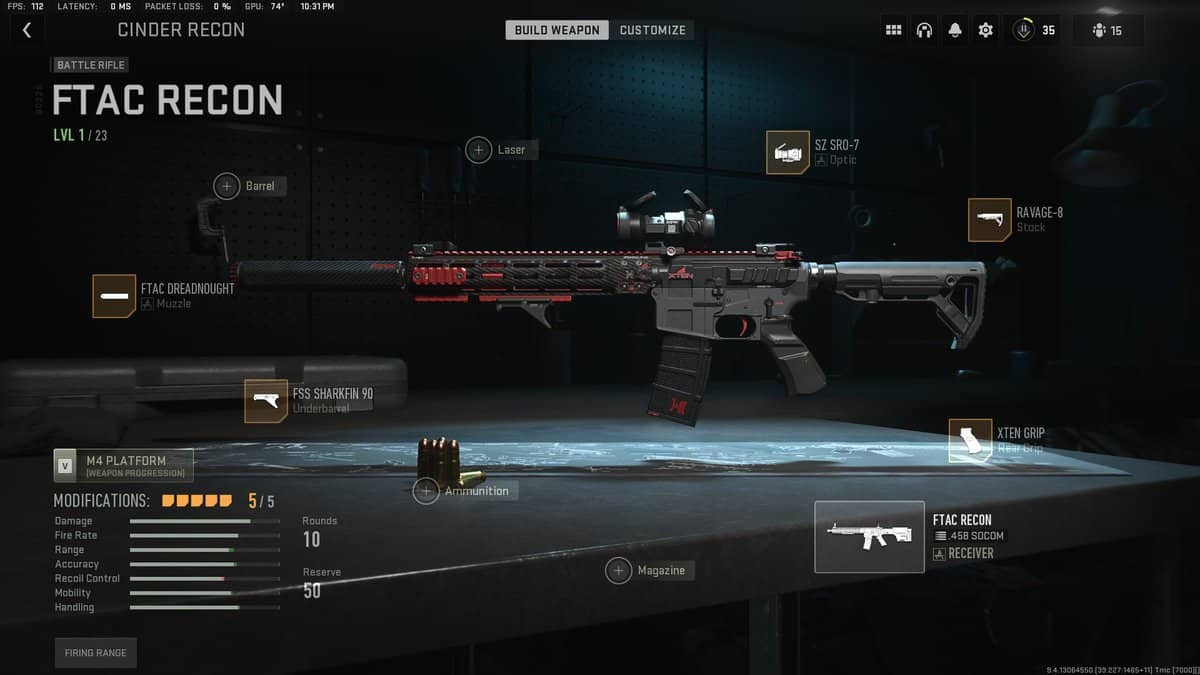 The FTAC Recon falls under the category of Battle Rifles in CoD MWII and is very effective for mid-range targets. Mostly, existing players opt for the guns they are already familiar with and avoid using the new ones. The FTAC Recon is among those ignored high-damage weapons in Modern Warfare 2.

On the first go, most players term FTAC Recon as a high recoil and unstable rifle. However, the loadout in MW2 can make the FTAC Recon much more stable and amazingly lethal, and that is where we will help you.

This build aims to increase FTAC Recon’s damage range and make the gun suitable for medium and long-range combat in CoD MWII. The gun has a low fire rate and mag size, so we need to ensure that each bullet counts for killing enemies instead of simply giving away your position on the battlefield.

The SZ Holotherm is perfect for providing a precision sight picture and thermal target identification. These features allow you to have more impact in long-range combat.

Furthermore, the thermal optics will allow you to scope out enemies using smoke cover screens to try and move in on your position or spot enemies from far away without differentiating the slight movements from the background.

Bull Rider 16.5″ is included in our class for better recoil control and damage range. This attachment also improves hip fire accuracy and boosts bullet velocity, which is perfect for the FTAC Recon class setup.

With the Bull Rider barrel, you can quickly kill an enemy in just two shots to the chest or a single shot to the head. The same damage is carried into medium-range combat, allowing you to provide ample covering fire while defending yourself.

To further improve our recoil control, Shred CP90 is attached. This will allow you much more control over your horizontal and vertical control, making it easy to take down enemies from long ranges and if you need to fire the weapon on multiple or moving targets rapidly.

Including the FSS OLE-V Laser ensures better mobility since the barrel of choice does reduce your mobility significantly, and this laser helps counteract the mobility penalty. This attachment will boost your aiming stability and increase your ADS speed and sprint-to-fire speed.

To further increase the weapon’s recoil control, we have decided to use the Edge-47 Grip as the underbarrel attachment. The grip not only reduces horizontal and vertical recoil but also reduces weapon sway when holding your ADS and tracing moving targets or holding positions

The combo with X-13 Auto will be the best with FTAC Recon. This handgun can act as an SMG at close range. You can cover your close combats by using the high firing rate and damage output of X-13. This will make your class a perfect setup.

To have Scavenger and Double Time as our base perks means you never run out of ammo in the game, as you can get more from other dead bodies and better mobility due to the increased duration of tactical sprint and crouch movement. You can move between the objectives quickly and provide cover to your teammates.

The inclusion of Fast Hands improves your ability to take on close enemies. You can quickly switch to SMG or your secondary weapon to take on the enemies. It means you will have an advantage in reload speed and equipment used over the foes.

Bird’s Eye is selected as the ultimate perk to have better control over the map. It provides information about the enemy’s directions through the minimap, which can be crucial to gain an advantage over enemies.

Drill Charges and Stun Grenade are excellent for controlling areas. You can clear the points that are difficult to capture by gunfight. Throw these items to damage or stun the enemies, making it easy for your team to rush in and grab the points or keep hold of points without having to worry about getting flanked.

Battle Rage provides quick health regeneration and improves your resistance against the enemies’ tactics. It improves your vision and helps you escape tricky situations.