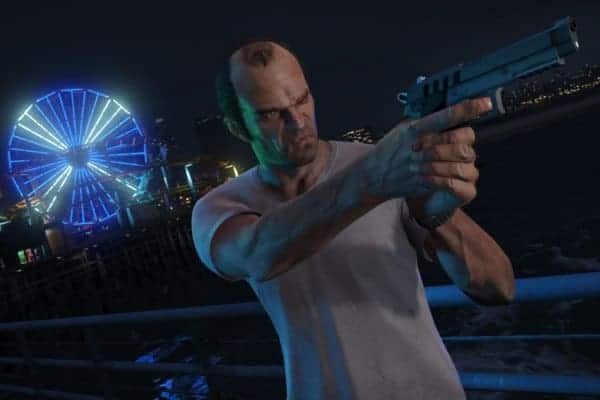 GTA 5 would be unrecognizable without its extensive stable of weaponry including high powered rifles, explosives and rapid-firing machine guns. As such, Rockstar has gone to great lengths to ensure that the weapons you wield feel alive and are varied enough to not leave you wanting.

This of course means that you’re going to want to know which guns are the best and what they’re meant to be used for. For more help on GTA 5, read our Assassination Missions, Hunting and Vehicles Customization Guide.

Body armor and most of the weapons are easy to get but if you want specific weapon, you can browse through the list of every weapon and body armor in the game, where to find them, and a small description of the gun as well as upgrades and add-ons.

A standard .45 caliber pistol, this normally has a magazine capacity of 12 bullets but the extended clip can increase this to 16 for a cost of $387. You can upgrade it with a flashlight and suppressor, and customize it by tinting it Black, Army or LSPD.

Combat Pistol
This does slightly less damage as compared to the regular pistol but is more accurate, has a longer range and higher rate of fire. Also available with an extended clip that holds 16 bullets instead of the normal 12. Upgradable with a flashlight and suppressor, you can customize it in Black, Army and LSPD tint.

AP Pistol
Probably the best pistol you have, it’s got a very high rate of fire due to being fully automatic and holds 18 rounds. The extended clip boosts this ammo capacity to 36 and you can upgrade it with a Flashlight and Suppressor. It can also be customized with a Black, Army and LSPD tint.

Stun Gun
The stun gun deals next to no damage, but that’s exactly what you want. It’s got an abysmal rate of fire due to it needing about 4 seconds to build charge after every shot. It has no upgrades but you can tint it Black, Army or LSPD.

Micro SMG
A very high rate of fire accompanies most SMG, and this one is no exception. The default clip contains 16 rounds but can be upgraded to hold 30. Also can be upgraded for a flashlight, scope and suppressor and customized by tinting it black, army or LSPD.

Slightly more accurate and longer ranged as compared to the Micro-SMG. Also features a clip that initially holds 16, but can be upgraded for 30 rounds. It’s upgradable with a flashlight, a scope and a suppressor and can be customized with a black, army or LSPD tint

This massive weapon combines a very high rate of fire, clip capacity, decent range and armor penetration. Its clips, while initially holding 54 rounds, can be upgraded to hold 100. The only attachment for this weapon is the Scope, although it can be customized by tinting it black, army or LSPD.

Combat MG
Basically a better version of the regular MG, this one is lighter, holds more rounds per clip, is more accurate and doesn’t sacrifice any of the other qualities found in the MG. The regular clip holds 100 bullets and the extended one holds 200.

It can be upgraded with a grip that reduces recoil and boosts accuracy and a scope. It can also be tinted black, army or LSPD.

A good, reliable weapon at medium-long range, the assault rifle boasts a clip that holds 30 rounds and can be upgraded to 60. It can be upgraded with a grip, a flashlight, a suppressor and a scope. It’s also customizable, featuring a Black, Army and LSPD tint.

Carbine Rifle
Similar to the Assault rifle, this weapon has a good rate of fire and a decent magazine, but is even more accurate. The 30 round clip is upgradable to 60, and you can get the Grip, Flashlight, scope and suppressor attachments. It also features a black, army and LSPD tint.

Advanced Rifle
It is very lightweight and compact, yet does not sacrifice on either damage, accuracy or rate of fire. Same as the others, it features a clip that holds 30 rounds and can be upgraded for 60. The attachments are flashlight, scope and suppressor and it can be customized with a black, army or LSPD tint.

This is your typical super long range weapon that can pop most targets with a single shot. It only has one clip and features a built in scope. The scope can be upgraded for more zoom and accuracy and a suppressor which slightly lowers damage. It can be tinted black, army or LSPD.

Heavy Sniper
Pretty much the same deal as the standard sniper rifle, except this one can punch through armored targets. The scope can be upgraded, but there’s no option for a suppressor and the clip only holds 6 bullets. It can be tinted black, army or LSPD.

The standard pump action 8 gauge shotgun. It’s good for indoors combat and deals immense damage at short range with a clean hit. It can be upgraded with a Flashlight and a suppressor. It can be customized to be tinted black, army or LSPD.

Sawed-Off Shotgun
This shotgun variant sacrifices even more range, fire-rate and accuracy for more portability, being usable in vehicle combat. Cannot be upgraded in any way, though you can tint it black, army or LSPD colors.

Assault Shotgun
Location. Found in The Altruist Cult Camp in the Chiliad mountains

This is the terror of close-range combat. The weapon is fully automatic, so it eliminated one of the huge flaws of the standard shotgun. It can also be upgraded from an 8-round clip to a 16-round clip.

The attachments include a grip, a flashlight and even a suppressor. Like everything else, it can be tinted in the standard colors.

You’re going to want to use this in those firefight that you just can’t seem to win. The launcher holds 10 rounds and is semi-automatic. You can upgrade it with a grip, a flashlight and a scope and customize it to be tinted black, army or LSPD.

RPG
Location. Found in the Altruist Cult Camp in the Chiliad Mountain

The very pinnacle of anti-vehicle warfare, the RPG fires slowly, so make each round count. It can pop tanks like soda cans, so it’ll destroy pretty much anything. Can only be upgraded with a grip and tinted in black, army and LSPD.

A truly devastating weapon, this 6-barrel gun has a rate of fire that is out of this world. It can’t be upgraded in any way (though there is little fault to find with the weapon). It can, however, be customized and tinted black, army or LSPD.

Standard explosive device, the grenade operates pretty straightforwardly. It deals a lot of damage in a cluster, and usually insta-gibs anything. You can throw it at a bunch of cars to trigger a chain explosion.

Jerry Can
Just a basica can of gasoline. You can use it to leave a trail of the stuff and then light it using a gunshot or a Molotov. The trail will light other flammable objects on fire on the way.

Molotov
This little mixture will create a pool of flaming death in any one area. Very useful for taking out people, not very good at blowing up vehicles though.

Sticky Bomb
This plastic explosive is one of the best in the game. You can stick it on buildings or vehicles and it blows up at the trigger. You can even use it on a drive by or to blow the doors off a security van.

Tear Gas
The tear gas is a nonlethal way to incapacitate multiple enemies at once. However, sustained exposure will normally cause death.

Body Armor
Body Armor does as it says, just basically protects you from bullets and explosions. It will take a bunch of damage but does not make you invincible.