Gotham Knights Endgame: What To Do After Finishing The Game? 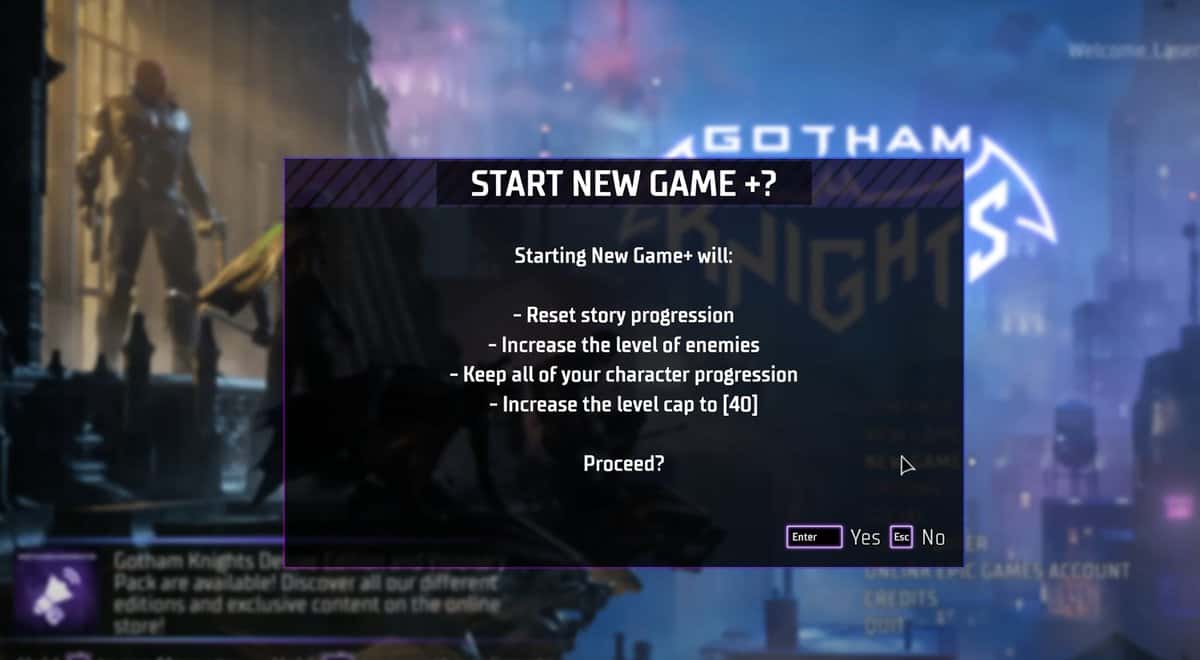 What to do after beating Gotham Knights?

While Gotham Knights may not be a full-fledged GaaS title, there is still plenty to do after you have finished the main storyline. The Endgame of Gotham Knights isn’t exactly like Marvel’s Avengers where you had to farm gear for higher-difficulty content.

The Gotham Knights completion time takes up to 15-20 hours but if you are someone who is aiming for 100-percent completion, be ready to spend at least 30 hours. This completion time covers all the aspects which include the side quests and optional missions as well. Keep in mind that these gameplay times are according to the difficulty settings.

In the meantime, however, you can partake in the following activities as “endgame” content for Gotham Knights once you finish the main campaign.

Start a New Game Plus

After completing the game and achieving max level 30, you will notice that you have a new button on your main screen that says New Game +.

After you start the New Game + the max level will automatically shift to 40 which will give you a chance to grab the legendary items again as well at both level 30 and level 40.

The story is reset for the new playthrough of the game. You will have to repeat the same missions and side quests again but this time the difficulty of the opponents is increased to make the experience challenging.

Things like ability points will remain the same and you can earn more ability points. You can also unlock new bike colors though it wouldn’t feel any different from the base game.

You also have to unlock the watch and get all those contacts and complete their objectives to obtain Gotham’s most wanted list. This can help you later in acquiring the Nth Metal which in turn is used for crafting legendary items. The leveling is superfast in New Game + mode as well.

All the skills acquired, and gear crafted by you during the previous playthrough will carry over to the new one and you’ll have the opportunity to gain further levels as you face more enemies and experience the game with different knights as well.

Obtain the Platinum trophy (get 1000 Gamerscore)

Players can obtain tons of achievements within Gotham Knights’ trophy and achievement collection. These achievements can be earned by completing a series of challenges and tasks within the night sky of Gotham city.

Players will need to complete challenges apart from the main objective missions.

After achieving a 1000 Gamerscore and obtaining the Platinum Trophy, you can truly say you have completed the game.

Play as a different character

In Gotham Knights players can play as any of four characters Robin, Red Hood, Batgirl, and Nightwing.

While you can change characters through the playthrough as you desire, some moments and scenes are character specific so experiencing the entire playthrough using a different character can be worth it for those moments.

Crime will never rest in Gotham. If you haven’t completed all crime challenges during your first playthrough go back to tick off each one that you can.

Gotham City in Gotham Knights is filled with crime challenges of various types and completing them rewards you with new items as well as Salvage Points, which can be useful in New Game Plus.

After the Heroic travel ability is learned, players can participate in time trials spread across the entire city.

These time trials are specific to certain characters so if you weren’t up for them during the first playthrough how about giving them a try now?

Though this is seen as a side quest it is a good way to earn upgrades and XP as well as allow you to test out your traversal skills.

Gotham Knights boast a huge map of the entire Gotham City. There are tons of areas to explore and side challenges to tick off, spread across the entire map. So, if you were putting off exploring the city during your original playthrough, now’s the perfect chance to do so.