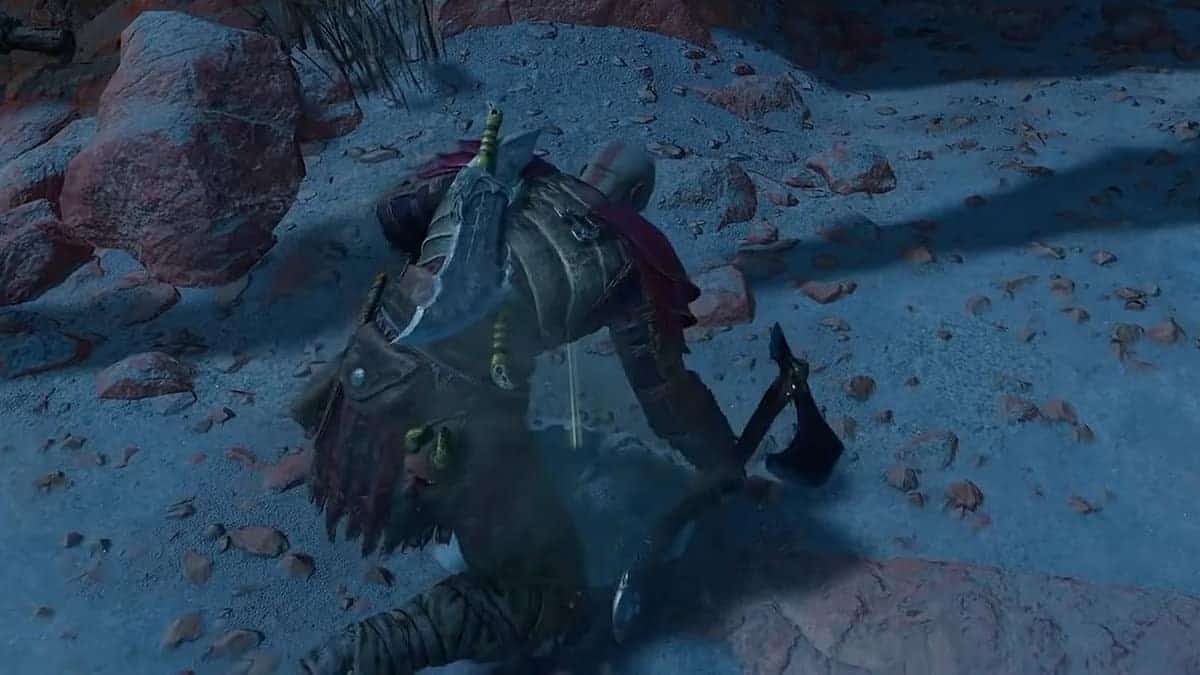 God of War: Ragnarok brings back Buried Treasures from the first game. You will once again need to first find a Treasure Map before being able to decipher clues to track down its Buried Treasure.

Unlike Legendary Chests and Nornir Chests, Buried Treasures mostly contain crafting materials and resources to help you upgrade your Blades of Chaos, Leviathan Axe, and Draupnir Spear. That as well as armor.

There are a total of 10 Buried Treasures to find across multiple realms in the game. Since their Treasure Maps only offer a written or visual clue, the following guide will help your search by marking the exact locations of every Buried Treasure in God of War: Ragnarok.

Something to keep in mind is that you need to find the Treasure Map to be able to loot its Buried Treasure. Even if you know where the treasure is buried, you still need to get its Treasure Map first.

Where to find Buried Treasures in Alfheim

Once you enter the Alfheim desert after completing the Groa’s Secret quest, head out from the Mystic Gateway location to find the Vulture’s Gold Treasure Map among the dark elves’ corpses on the ground.

Make your way to the giant skeleton skull in the northeast half of The Barrens. The Vulture’s Gold Buried Treasure lies inside the skull, near the front teeth, and right next to the campfire.

Just park your sled and climb the rocks to spot the yellow ping on the ground.

The Forgotten Tower Treasure Map can be found in the northeastern corner of The Forbidden Sands. However, you will only be able to reach this place after completing The Reckoning quest and the Secret of the Sands favor.

Reach the Elven Sanctum and make your way to the main library. Turn around and climb the ledges to spot a Legendary Chest. The Treasure Map is right next to it.

Once you find the map, move west from the light elf library to reach the location marked on the map below.

You need to grapple through the given points on the wall and make your way toward the locked door. You will find the Forgotten Tower’s Buried Treasure just in front of the locked door.

Where to find Buried Treasures in Svartalfheim

Head to Alberich Hollow and reach the marked location on the map below. Use the lava rock dispenser to open the way ahead. There is a little ledge on the left just before the fallen pillar. You can throw the lava rock from there at the crystal barrier.

With the way open, head through the tunnel and make your way to the end. Follow the wooden walkway to the right to find the Fruits of Industry Treasure Map at the end of the walkway.

You now need to head to Modvitnir’s Rig. Sail to the marked location on the map and dock your boat. Climb the first ledge and look immediately to your right. The Fruits of Industry Buried Treasure will be right there.

Dock your boat on Alberich Island and use your Draupnir Spear at the wind vent to climb the wall ahead. Follow the path until you find a soundstone barrier on your left. Destroy it with a sonic arrow and take the wooden ramp below.

Spot the wind fissure on the rocks below. Use your Draupnir Spear a gain and detonate to free the water and raise the lift. You can now use the grapple point above to reach the wooden platform.

Spot a second grapple point on your right to reach the rocks. The Washed Ashore Treasure Map will be on your left right under the large, yellow gear.

Now head to Dragon Beach and sail your way to the south end where there is a giant skeleton in the water. Dock your boat on the beach and take a right. The Washed Ashore Buried Treasure is next to the skeleton.

The Mining Glory Treasure Map is located in Nidavellir. Reach the marked location on the map and head to the end of the marketplace.

Spot the wind vent on your right and use your Draupnir Spear to climb. The map will be just past the Legendary Chest.

After getting the map, head to The Applecore. It can easily be reached by first getting to the Mystic Gateway and the rest of the way by ferry.

At the end of the cave, drop down into the room using the chain. Find and enter the crawlspace on the north end of the room.

On the other side, there is another room with a double door. Make it to the north end of the room and into the hallway by crossing a narrow wooden path.

Head further north by crossing the waterfall. Drop down the ledge and take the spiral pathway down. The Mining Glory Buried Treasure can be found at the end of the path in front of the doorway.

Where to find Buried Treasures in Vanaheim

You need to go to the Vanir Shrine. Dock your boat at the marked location on the map and climb the cliff ahead. There is a grappling point on your left. Use it to reach the other side. Now scale the rocks again to reach the top.

If this is your first visit, Freya will reveal an entrance in the mountain on the left as part of the Freya’s Missing Peace favor. Go through and you will enter the Vanir Shrine. The Giant’s Toes Treasure Map is right of the Lore Marker on the right side of the Shrine.

The Giant’s Toes Buried Treasure is located below the Cliffside Ruins right next to Brok and Lunda’s workshop and behind the Mystic Gateway.

Under the Rainbow Treasure Map location

For the Under the Rainbow Treasure Map, make your way to Noatun’s Garden. From the marked location on the map, go straight and circle behind the ruins from the right. The map is hidden in the grass at the end, so look carefully.

Under the Rainbow Buried Treasure location

Now, you need to go back to Goddess Falls. Start climbing and when you reach the second level of Goddess Falls, follow the cliff on your right. The Under the Rainbow Buried Treasure is across the gap. Make the jump and look near the edge.

You need to first complete the Return of the River favor. This will floor the Crater in The Plains to allow you to reach the other side. Sail across the new, flooded river to reach the island. Dock and walk to the northern end of the island to find the Scar is Born Treasure Map.

Reach the Crater Entrance Mystic Gateway. Face the frozen lightning bolt and scale the wall. Turn right after dropping down the ledge and keep going straight until you see a line of giant, circular stone rings forming a tunnel of sorts. A Scar is Born Buried Treasure lies between the first two rings.

Where to find Buried Treasures in Midgard

You will find an arena enclosed by ice once you reach the entrance of Lake of Nine. You must take the Lower Wildwoods route, the same place where Kratos’s house is located. The arena is called Raider Fort, and the only collectible present in this arena is the Viking’s Gift Treasure Map.

Next, move toward the lit campfire after clearing the whole area of the Raider Fort. Collect the map and then go to the area closer to the Raider hideout to collect your treasure.

Spot the Raider’s Hideout in the same area, east of the Lake of Nine. Make your way there and you will find the Viking’s Gift Buried Treasure in front of its main double-door entrance.

You need to return to the final section of The Applecore for the Demise of Dagestr Treasure Map. The journey can be completed by taking the ferry starting from Aurvangar Wetlands.

From the Mystical Gateway marked on the map, use the zip line ahead. Drop down the ledge and turn right to climb up from the wind vent.

The Demise of Dagestr Treasure Map will be in front of the speared corpse alongside the tree roots.

With the Treasure Map with you, make your way back to the Lake of Nine. Find the fissured wall on the western side of the cliff, northwest of Tyr’s Temple.

Destroy the wall and create a new opening and then head inside. You will find the Demise of Dagestr Buried Treasure.