God Of War: Ragnarok Secret Of The Sands Favor Walkthrough 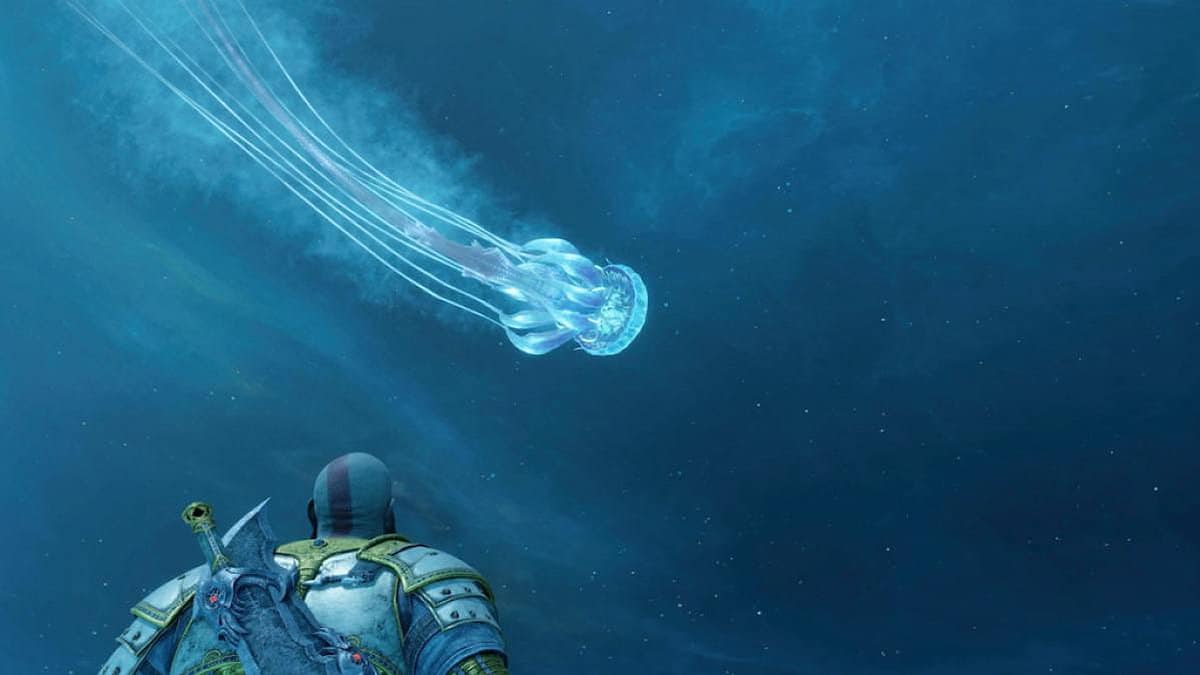 The Secret of the Sands favor requires you to free a Hafgufa, a giant jellyfish that somehow became trapped under the deserts of Alfehim in God of War: Ragnarok.

Atreus will mention hearing the cries of pain of a beast after you reach The Strond. The side quest will begin when you decide to head out to the desert to investigate.

The Secret of the Sands is not only the first favor you can complete in God of War: Ragnarok but also an incredibly important one.

Freeing the Hafgufa will clear the storm in The Barrens, allowing you to explore that area for its many collectibles. You will also be able to start the Song of the Sands favor, which requires you to free another Hafgufa to restore the Alfheim ecosystem.

The following walkthrough will help you with all of the objectives and puzzles to complete the Secret of the Sands favor in God of War: Ragnarok.

Secret of the Sands walkthrough

You first need to complete Groa’s Secret, the fourth story quest of God of War: Ragnarok. This will open a new path in Alfheim for you to explore.

Remember to speak with Sindri at his shop in The Canyon while making your way to The Barrens. The Secret of the Sands favor will begin automatically when you enter The Barrens.

Finde the source of the noise

Once the quest begins, make your way across The Barrens by using the Gulon Sled near Sindri’s workshop. Head east to find an entrance to a cave that extends underneath the desert.

Head inside and climb down until you reach an opening on the other side and swing over. Move forward along the path while using your Blades of Chaos to swing across the gaps. Now comes the first puzzle of this quest.

These puzzles consist of a series of red glowing nodes called hive matters/Dark Elf Barriers that block your path. These can be destroyed by throwing your Leviathan Axe at them.

As you continue along the path, you should see a horizontal red node first. This node can simply be destroyed by throwing your Leviathan axe at it. As you move along, a few enemies and another set of these nodes appear, with three vertical red ones leading down to a purple crystal. The enemies can be defeated with ease.

All you need to do now is pull out your Leviathan Axe and aim for the purple crystal below. This will automatically set a trajectory for your Axe, which allows it to destroy all the red hive matters in a single throw.

Do note that you need to set the trajectory of your Axe in such a way that it aims for the nodes in sequence. If that is the case, the trajectory line will become blue, if not, it will be purple.

Continue forward and eliminate the wave of enemies that you encounter. Loot the chest at the end and enter the opening on your right to defeat another wave of enemies.

After defeating the enemies, climb up the wall with scribbles. On a side note, there should be a bucket above you here which you can throw your axe at to break. Looting this bucket gives you a Rawhide crafting component.

Now, as you move to the edge, you should see your path blocked by another set of obliquely running hive matters. All you need to do is to aim your Leviathan Axe at the red central node and throw it to destroy all of them at once, unblocking the path.

Once that’s done, kick the obstacle at the edge and drop down. Head north forward to discover a chest and some lore right next to it.

Use the zipline to make your way across to reach a chest that contains Hacksilver. Then grapple across the cliffs to leap over the gap. You should see the third hive matter puzzle from the cliffs as you grapple, but they cannot be destroyed from that position. You need to keep grappling till you reach the other cliff.

Jump down from the other end of the cliff and defeat the enemies there to get a clearer view of the obliquely running hive matter. Aim for the purple crystal to set a trajectory that would deflect your Leviathan Axe and cause it to destroy the red hive matter in a single throw.

Now climb back up and use the new grapple point, visible after destroying the hive matter. Grapple to the last cliff and climb to its top. Then slide left to face another ledge. Grapple to this ledge and continue forward.

Grapple your way across to drop on the opposite side of the closed gate. You can now hit all three bells to unlock the Nornir Chest. Do note that this will be a timed thing – you need to hit all three of the bells quickly to open up the chest. This chest contains a green apple – the Idunn Apple, which will be very useful later on.

Enter the cave and drop downwards using the chain. You will now be swarmed by a bunch of enemies, defeat them and crawl through the tight space, led by Atreus.

Next, strike the purple crystals in a way that the trajectory of your Leviathan Axe is denoted by a blue line, to clear out the hive matter to its right.

This will reveal a red chest that contains Rawhide, Dwarven Steel, and Hacksilver.

Now drop down below and enter the cave-like structure and you’ll come across another hive puzzle.

Now that the path is free, move ahead and leap over the game. Now, look to your left and shoot at the fire vessel to clear the obstruction next to it.

Continue forward to reach a chest that contains Hacksilver.

Now, you need to go back the way where you came from and this time head right from the end.

At this point, you should come across another hive puzzle.

Aim at the purple crystal right to your left and throw your Leviathan Axe at it when the trajectory line turns blue. It will destroy the first hive matter node, then strike another crystal ahead, rebounding off and destroying the other nodes.

Move forward and climb the ledge to come across a chest that contains Forged Iron, Dwarven Steel, and Hacksilver.

Right in front of you should be another hive matter puzzle.

The last bit of hive matter can be clear by adjusting the purple crystal on the giant lantern. Strike your axe at the paddles of the lantern to rotate it. Now using it to clear out the hive matter.

Make your way across, defeating the spawning Nightmares. Now climb the wall to finally reach the Hafgufa.

You must now free the Hafgufa, destroy hive matter and clear out ore deposits in the area to free it from its bindings.

You must first move a little forward and turn left to see the fire vessel that can be hit to blow up the obstruction. Then, you can go back and drop down to that location.

To your right, you should be able to see a hive matter node, and right behind it a purple crystal. Aim at the node in a way that it hits the purple crystal as well behind it – provided that the trajectory line is blue.

Now, head back up top and look at the wall to your left. There should be another purple crystal here, aim at it and throw your Leviathan axe at it, hence completing the last hive matter puzzle and freeing the Hafgufa.

Continue your way along till you find yourself next to a legendary chest. Climb the wall next to it and head forward to find a hatch opening, destroy it to get out.

Now clear out the hive matter and grapple out. You must now head northwest to destroy the hive cage. Use the Gulon sled outside to find the cage.

Once the cage is destroyed, the Hafgufa is freed and the Secret of the Sands quest is completed.