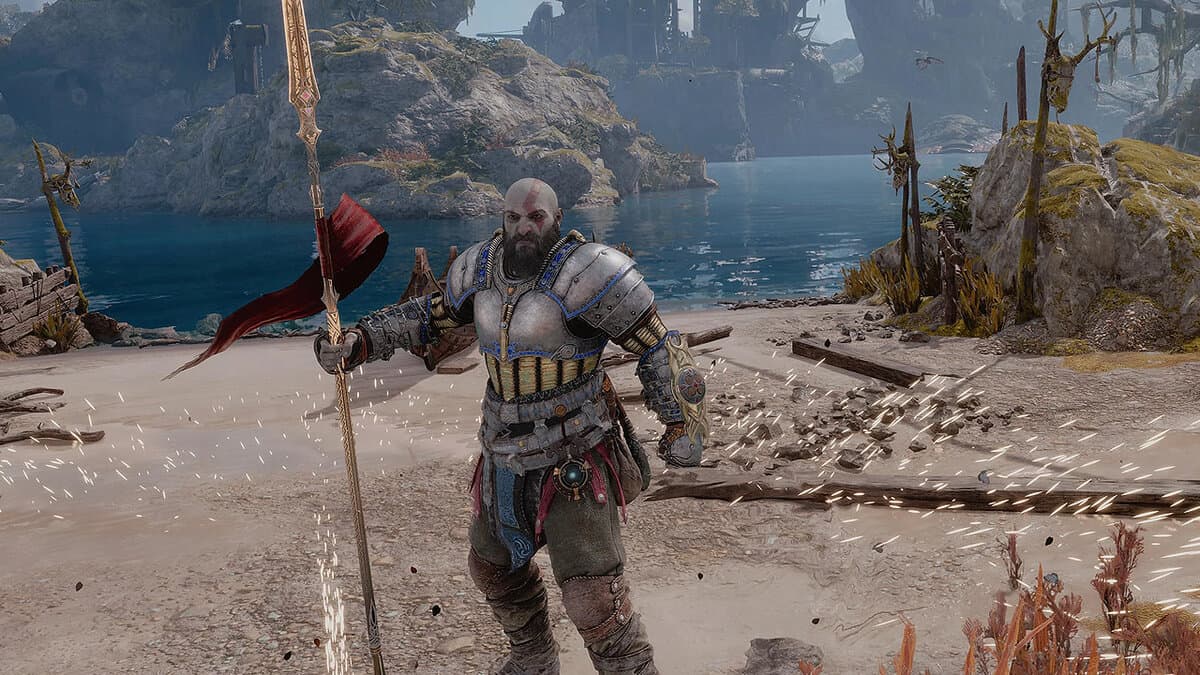 In addition to the Blades of Chaos and the Leviathan Axe returning from the first game, God of War: Ragnarok introduces the mighty Draupnir Spear as the third weapon for Kratos to use.

The Draupnir Spear is all about range and devastation. You can spear enemies before detonating them for massive damage. Much like the other weapons, you will also need the Draupnir Spear to unlock new paths and areas later in the game.

You will need to find Gale Flames and Gale Sparks to upgrade the Draupnir Spear for increased damage. The following guide will tell you all of their locations and what you will need to do to max out the new weapon in God of War: Ragnarok.

How to upgrade the Draupnir Spear?

Gale Flames and Gale Sparks are rare upgrade resources, far rarer than the Chaos and Frozen Flames needed to upgrade the Blades of Chaos and the Leviathan Axe.

There are only a few Gale Flames to find in God of War: Ragnarok. This is because you get the Draupnir Spear fairly late in the game and when you do, the weapon will already be at level 5.

Its starting level ensures that your weapon damage is attuned to match the enemy and boss levels.

Where to find Gale Flames in God of War: Ragnarok?

There are a total of four Gale Flames scattered across the realms. The first three drop from various bosses, but the fourth has to be made by fusing six Gale Sparks.

The first Gale Flame in this list is dropped from the Flame Phantom boss in Vanaheim. You will come across this boss while on the Nocturnal Predator quest.

This quest is unlocked fairly late in the game, specifically after you save Freyr and then start a side quest with Birgir to investigate the death of some animals in the Crater.

Do note that this boss only appears at night.

Bodvar, the Fierce, and Starolfr, the Troublesome, are two bosses that you have to defeat at once in the Jarnsmida Pitmines of the Svartalfheim realm. They can be found by activating the Berserker Gravestone there.

The bosses will drop a Gale Flame upon their defeat.

The third Gale Flame in this list is dropped by two bosses: Hrist and Mist. These bosses are encountered together as part of the main story.

Fairly late in the game, you will come across “The Summoning” main quest. In this quest, Kratos travels to Muspelheim to speak to Surtur, who asks Kratos to defeat Odin and takes him to the Spark of the World.

Where to find Gale Sparks in God of War: Ragnarok?

The fourth and final Gale Flame on this list isn’t found as it is. It has to be made by combining six different Gale Sparks, each of which can be dropped by a Lyndworm. These Lyndworms can be found in different regions across the world.

These Lyndworms are part of the “The Lost Lyndworms” Favor. You can start this favor at Sindri’s house. Just head to the left of it and ring the bell to summon the squirrel and start the quest. The locations of all the Lyndworms will be marked on the book inside this house.

This Lyndworm is located inside a cave in the Svartalfheim region – Alderich Hollow. You first need to reach the top of the bridge via the chain, then use the grappling hook provided to leap over the hurdles to reach the large statue.

The location of the second Lost Lyndworm is the same as the one above, i.e. Alderich Hollow/Svartalfheim.

You should see a peculiar grave at the Boat Dock, right in front of a large wall. You can climb this wall to reach the top. You will be stopped by a hurdle in your path to the left. Freya will solve the problem with her arrow, and you can continue your climb to the top.

When you reach the top, use your spear to stop the water. Next, interact with the Gale Spark to spawn the Lyndworm.

The third Lyndworm can be found in The Applecore – Svartalfheim. This is a fairly simple one. You should see a locked gate in the cave. Solve the puzzle to open it and enter to find a black hole. Continue the same process to spawn the Lyndworm and obtain the Gale Spark.

The fourth Lyndworm is located way at the top of The Forge in the Svartalfheim region. At the Forge, you should see an opening to a cave between the two mountains just beside the Big Bell. Cross the opening and climb up the mountain ahead.

The fifth Lyndworm is located in the Plain – Vanaheim. Do note that before you can access this location, you’ll first have to complete the “Scent of Survival” quest.

If you have, you can continue on the path on the left of the marked location to reach a cave. Across this cave is a dragon, which you have to defeat to obtain the 5th Gale Spark on this list, which will be nearby.

The 6th and the last Lost Lyndworm on this list is located in the same region as the one mentioned above, I.e. The Plain – Vanaheim. At the left of the marked location – the round structure, should be an abandoned path that leads to a campfire not far along.

Beside the campfire and beneath the cliff, you should be able to see the last black Gale Stone. Continue the same process to obtain the Gale Stone, i.e. defeat the monster that comes with it.

That about sums up all of the Gale Flames that the game has to offer.