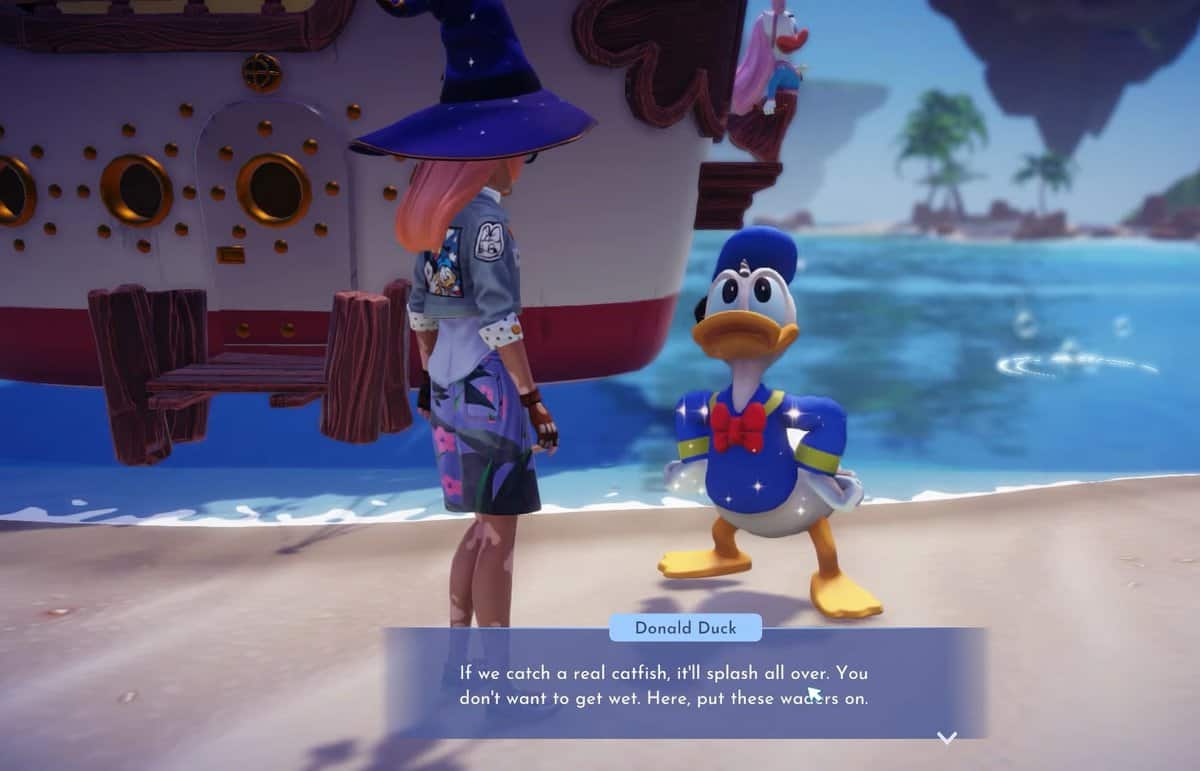 Your interactions with characters in Disney Dreamlight Valley don’t always have to be about some deep issue, it can be just to help sort out minor arguments between the characters, especially those regarding Catfishes.

This guide will help you complete one of Donald Duck’s quests in Disney Dreamlight Valley, A Fishy Dispute.

A Fishy Dispute quest by Donald Duck is unlocked after you have attained Friendship Level 4 with Donald Duck and unlocked the Sunlit Plateau Biome in Disney Dreamlight Valley. After you have met the requirements for the quest, you can find Donald Duck on the beach and talk to him.

Turns out, Donald and Goofy have a bit of an argument going on. Donald insists that Catfish can be found and caught in oceans, whereas Goofy says that you can only get Catfish from lakes, not oceans. Of course, Donald being stubborn as a mule decide to prove his point.

As you talk to Donald, he gives you a Fisherman outfit, that you need to equip as soon as A Fishy Dispute quest starts. Donald will mark a fishing spot just next to you and you are tasked with trying to catch a Catfish here.

Start fishing. You need to catch 10 fish here before you can move on to the next objective. We recommend fishing only in the ripples, otherwise, you will just keep on catching seaweed. Once you have caught 10 fish, none of which will be a Catfish, you need to talk to Donald Duck.

Donald doesn’t admit that he was wrong, and takes you to another spot where he promised he saw a Catfish. Follow Donald to another nearby fishing spot, and there is a legendary ripple ready for you to start fishing.

This time, you don’t get any fish, but something more interesting, a Time Capsule. It seems odd, but return the Time Capsule to Donald.

As soon as you hand over the Time Capsule, which is just a huge hunk of metal, not something fancy and futuristic, Donald will unlock it for you to open.

Inside the Time Capsule, you find a Memory Fragment. In this Memory Fragment, you see a picture of another Time Capsule hidden away somewhere. Donald forgets all about his Catfish dispute with Goofy and tells you to meet him in Sunlit Plateau to go look for another one of his Time Capsules.

Confirm the location of the Time Capsule from the Memory Fragment, then start digging with your shovel to unearth the next Time Capsule. Same as with the last one, hand it over to Donald for unlocking. This time, Donald says that he needs some time to unlock the Time Capsule.

This marks the end of Donald Duck’s A Fishy Dispute quest, a quest that started with Catfish and ended with Time Capsules. To follow up on this Time Capsule, you need to further increase your friendship level with Donald Duck.