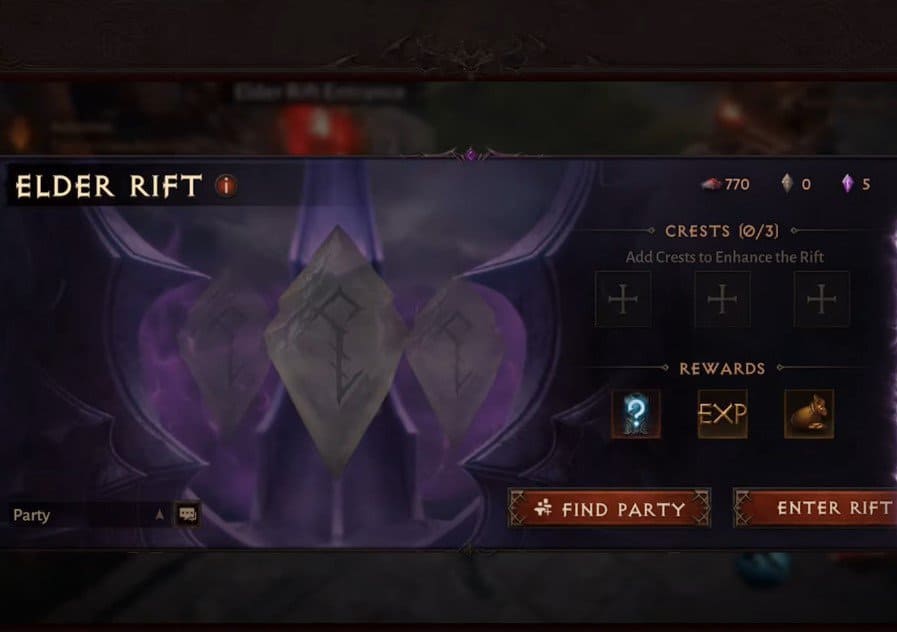 To help you out with completing the Elder Rifts in Diablo Immortal, we’ve prepared this guide where we’ll be walking you through all the information you need to know about them, including how to start, modify and finish Elder Rifts.

How To Unlock Elder Rifts In Diablo Immortal

To unlock Elder Rifts in Diablo Immortal, you need to play through the main questline until you’ve completed the first two chapters of the story, which are Wortham and Ashwold Cemetery. You will then reach a new location called in the game called “Westmarch”.

Once there, head to the Palace Courtyard and you’ll find two obelisks. To unlock the Elder Rift, interact with the obelisk on the left. You don’t have to worry about finding them though as Charsi the blacksmith will introduce you to Elder Rifts as part of the story when you first arrive in Westmarch.

But before you hastily enter an Elder Rift, there are many things you need to know. Let’s first go over the mechanics of the Elder Rifts in Diablo Immortal.

How Do Elder Rifts Work In Diablo Immortal

Elder Rifts are randomized dungeons in Diablo Immortal where you can complete a simple objective to gain great rewards. They usually take around 5 minutes to complete and they grant amazing rewards, which can even be improved through some items (more about that later).

Elder Rifts are completely free to enter and can be attempted as many times as the player wants. This makes them the perfect place to farm resources.

When you manage to completely fill up your progress bar, all of the monsters present in the Elder Rift will despawn and a Rift Guardian boss will spawn in their place. Your final objective will be to kill the Guardian boss.

The map, types of monsters, and Guardian boss in the Elder Rifts are completely randomized.

How To Complete Elder Rifts

It’s better to run Elder Rifts in a group where the Combat Rating of other members is slightly above yours, as it’ll allow you to get much better rewards from the rift. However, don’t party up with someone who is significantly more powerful than you as the dungeon will become too hard for you to clear.

When you finish an Elder Rift, you will have 5 minutes to collect your loot before you’re kicked out of the rift.

How To Enter Empowered Rifts

Empowered Rifts drop much better and more loot as compared to a simple Elder Rift. Rifts can be powered by using crests. When you open up the Elder Rift menu, you’ll notice that there are 3 slots for Crests.

Crests are a type of currency in Diablo Immortal that can be added to Elder Rifts to modify them. And when you add Crests to an Elder Rift, they significantly increase the quantity and quality of the rewards you gain from the rift.

Each player in a party can add 3 Crests to the Elder Rift. Aside from the Normal Crests in Diablo Immortal, there are also Legendary Crests. The game gives you the option to add 10 Legendary Crests to a rift instead of only adding 3.

A Normal Crest adds 1 modifier to the Elder Rift, which can be positive or negative. When you add a normal Crest, it guarantees that the Elder Rift will drop Runes and grants a chance for you to obtain a Legendary Item.

A very important mechanic to note is that if you are in a party, you need to empower the Elder Rift with your own Crests to be able to receive Runes and Legendary Items from it. If your party members add Crests but you don’t, you will only receive the normal rewards from the Elder Rift.

Adding Crests to an Elder Rift also rewards players with more Fading Ember. The amount of bonus Fading Ember you receive from the Elder Rift depends upon the number of Crests the entire party adds to the rift.

When you fill up all three Crest slots for a rift, at least one of those Crests will give a positive modifier. The other two modifiers are up to chance.

The number of modifiers that are added to an Elder Rift is only based on the Crests that were added by the party member that added the highest quality and the most Crests. The Crests added by other party members will not apply any modifiers.

When you begin an Elder Rift, the first thing you need to do is take a close look at the modifiers. If the modifiers seem way too annoying to handle, you and your allies should leave the Elder Rift immediately.

If you leave without attacking any mobs, your Crests will not be used up. You will then be able to start the Elder Rift again with the same Crests, and hope that you get better modifiers this time around.

Elder Rifts are one of the best ways to farm Runes and Legendary Gems in Diablo Immortal, but only if you’re empowering your Elder Rifts with Crests. Without Crests, Elder Rifts drop some gold, experience, Fading Ember and they have a small chance to drop a high-level item.