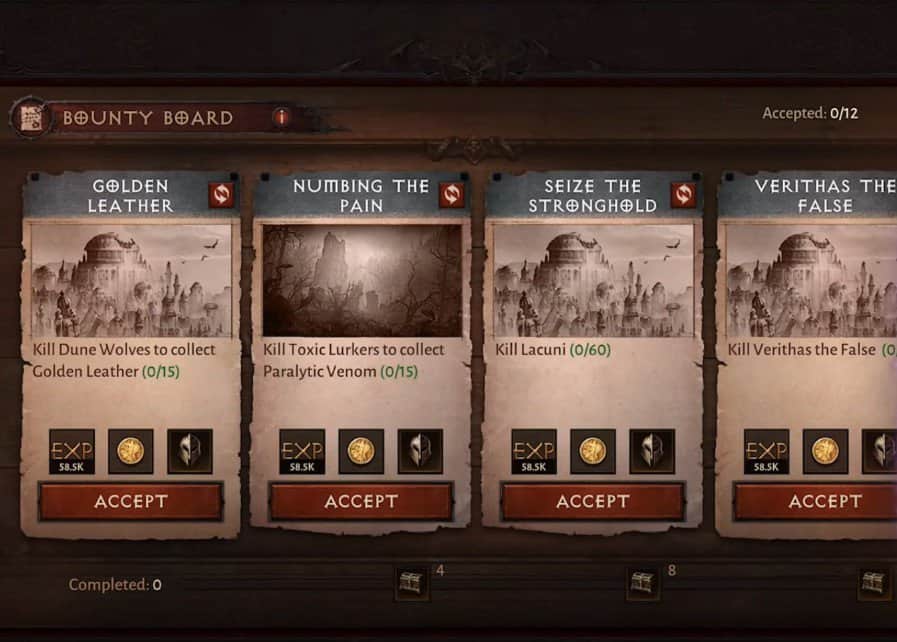 Diablo Immortal features a large variety of Daily Tasks for players to perform to get additional resources as well as different rewards in form of currency or materials for upgrading your items. One of these daily tasks is Bounty Hunting. This guide will introduce you to the basics and locations of the different bounties that you can find in Diablo Immortal.

How Do Bounties Work in Diablo Immortal?

Bounties are minigames that players can accept from any quest board. Bounties require players to eliminate the targets that every bounty specifies. However, the option of Bounty Hunting is not available from the start.

To unlock Bounty Hunting, you need to head to Palace Courtyard in Westmarch. Here, you need to talk to Charsi and complete the tutorial quests. Doing so will unlock the Bounty system in Diablo Immortal.

After you have completed the tutorial, you need to find the Quartermaster NPC Derek next to the Bounty Board. You can activate a total of 4 bounties at a single time, and you can take a total of 8 bounties per day.

Depending on the location, there are two types of bounties. These are the Open World Bounties, that have a Blue Border. then, there are bounties with a Green Border and the target for these bounties are found in Dungeons.

In case you do not find a bounty in an area of your level, you have the choice to abandon and re-roll for bounties three times per day for a chance to get either easier bounties or to get better rewards.

It is important to note that Bounties are not required to be done alone. You can choose to complete your daily Bounties with friends in a cooperative fashion.

Doing Bounties with friends is the quickest way to complete your dailies and move on to the next task. You all will receive the rewards, which also makes it important for friends to share their Bounties with each other so that everyone can get the rewards and XP.

Though we have mentioned that you need to use the Bounty Board, where the bounty board is located is still unaddressed.

Following are all the Bounty missions currently available in the game. These will include the different bounties in the various areas of the world that you can find.

Guarding the Gardens: Kill Monsters in the Eastern Gardens

Disturbing Their Rest: Search the Ossuary; Kill the Disturbed Zombies

Hidden in the Grass: Kill Monsters Along the Outskirts

Into the Swamp: Kill Bog Creatures

Beneath the Sands: Investigate the Sands, Kill Lurking Desert Crawlers

The Khazra Threat: Kill Khazra in the Moon Clan Encampment

Khazra on Zavain: Find Khazra Waiting in Ambush; Eliminate Them

Zealots: Locate the Cultists Lurking in Mount Zavain and eliminate them

For every 4 bounties completed, you will get an additional 2000 Experience. Every single bounty gets you 8 Battle Pass Points as well.

Try to get bounties is a squad. The rewards are provided to all the members and you can easily complete the bounty with help from others. This increases the speed at which you complete and get rewarded for the bounties.

Always track your bounties. This allows you to head straight to your bounty location without getting distracted by other tasks in the world.

Lastly, know which bounty to take. Blue Bounties are better if you don’t have enough time to complete them. They are faster to complete but the rewards are less appealing.

The Green Bounties on the other hand have better and hefty rewards. However, going in dungeons for completing your bounties is time-consuming and requires patience to complete. Make sure which bounty you want so you don’t have to turn the game off in the middle of your bounty.

If you find multiple daily tasks in a specific location, try to get a bounty for the same area. This allows you to get rid of multiple tasks in a single run, without having to go to the same area again and again.

Lastly, visit Derek for the rewards after you have completed your 4 bounties. This allows you to get the complete rewards collectively and you can get all your purchasing and upgrades done in a single run to the Westmarch area.