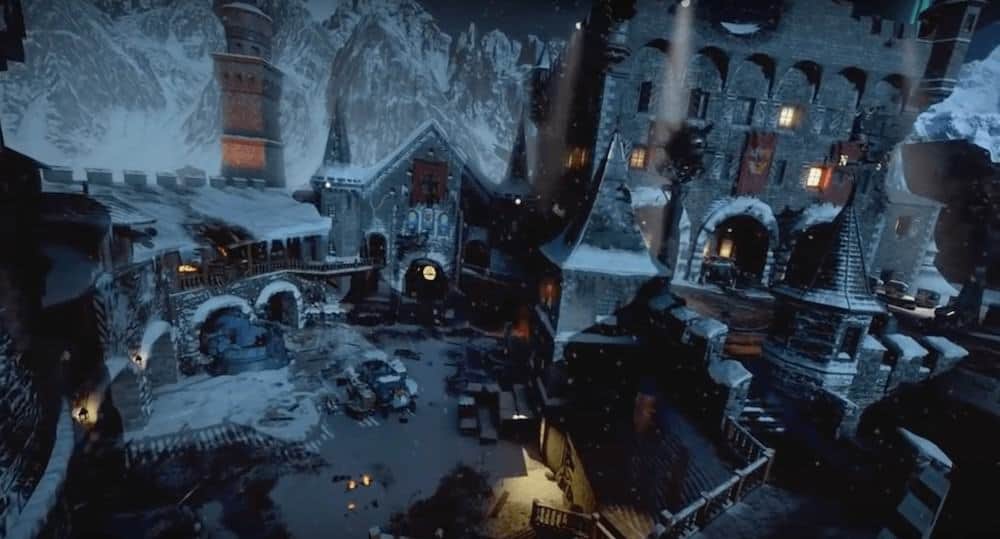 For more information on Der Eisendrache, check out our How to Turn On Power and How to Upgrade Wrath of the Ancients.

Just like previous installments, completing the Easter Egg involves several steps, however, one thing is for certain; the Easter Egg can be completed solo, but it is always recommended to have a fireteam of 4 players.

The Clock
Firstly, you need place the gravity spikes directly behind the clock and wait until 09:35. After this, you need to activate the terminal located on the right-hand-side of the Clock Tower entrance which will trigger a lightning sequence. For more information on how to acquire gravity spikes, you can check out our Der Eisendrache Ragnarok DG-4 guide.

Activating the Pyramid
Once you have successfully turned on power, you need to head over to the Undercroft area right next to the pyramid with candles and various symbols. Once you get there, all you need to do is to stand on each of the 4 blue squares until each on lights up and you acquire zero-gravity effect.

Wallrunning in Pyramid Area
After acquiring zero gravity from the previous steps, run around the wall and step on all 4 in order to teleport to past. Once this is done, interact with the teleporter nearby in order to transform your melee into plunger.

Acquiring Wrath of the Ancients
To acquire this Wonder Weapon, you need to feed 3 stone dragons by killing zombies in their vicinity. Once done, you need to head over to the knight’s tomb in order to acquire the bow.

Upgrading the Bow
The bow or the Wrath of the Ancients can be upgraded into 4 different variations; details of which can be found below:

Lightning Bow
You need to start by shooting the weather vane followed by igniting 3 bonfires located on the outside of the map. After this, you need to step on all symbols while in zero-gravity mode and fill 3 urns by killing zombies in their close vicinity. After electrifying the now-lit bonfires using soul-fed urns, acquire the re-forged arrow from the weather vane, place it in the chest, and charge it before acquiring it.

Fire Bow
You need to start by shooting the symbol on the upper floor of the Bell Tower followed by waiting for the rocket test to complete before firing the red fireball that spawns in the map. After this, you need to shoot an arrow on the 3 ritual circles while in air and charge them by killing zombies in their close vicinity. After this, return to the Bell Tower, find an apothicon symbol, fire an arrow in the fireplace corresponding with the apothicon symbol, and kill a zombie under the fireball. Finally, pick up the arrow, charge it, and get the bow.

Wolf Bow
You need to start off by interacting with four paintings around the map followed by shooting a flag and picking up the dropped skull. Place the skull at a location near the pyramid and follow the ghostly wolf around the map before activating zero-gravity and wallrunning around the room till you’ve successfully landed an arrow through the hole. Acquire the re-forged arrow from the skeleton, charge it, and pick up the bow.

Purple Bow
You need to begin with shooting a symbol inside the gatehouse followed by heading to the circular room and acquiring an urn from the ground. After this, you will have to run around the map in order to acquire a total of 6 skulls. Once done, head to the armory and complete a simple puzzle. After solving the puzzle, acquire the re-forged arrow, head down to the pyramid area, charge it, and acquire your upgraded bow.

For detailed information on how to Acquire and Upgrade Wrath of the Ancients; check out our detailed guide.

Finding the Wisps
Before doing this step, you need to ensure that you have an upgraded bow. You need to head over to the teleporter and shoot the prongs at the very top until you see them turn gold. After this, you need to shoot all 4 sparkling scattered across the map – refer below to check their possible locations:

You also need to ensure that you do all this before the round ends.

Blast from the Past
After shooting the wisps, you need to head back to teleporter and time-travel into the past. While in the past; you need to remember the vault code, pick up the blue fuse as well as both the Soul Canisters to proceed ahead.

Using the Computer Terminal
You need to carry the blue fuse from the past and insert it into Death Ray trap followed by using the switch which will activate the terminal near the Rocket Launch Pad and Bell Tower. Once again, make sure that you do not end the round, head to the terminal outside the Bell Tower and enter the code from the past.

Doing so will open up the vault nearby allowing you to acquire a couple of Tesla Coils and a floppy disk. You need to insert these coils inside the machines near the Death Ray trap followed by activating it.

Mini-Game; Simon Says
After supercharging the Death Ray, you need to insert the floppy disk into the computer terminal. Doing so will start a mini-game called Simon Says which you need to play and win in order to proceed further. Do note that you need to do this twice – once near Rocket Launch Pad and once near the Bell Tower.

Dempsey’s Pod and the Keepers
Once again, head over to Death Ray trap and activate it which will shoot down Dempsey’s Pod outside the control center.

At this point, you need to shoot the wisps once again (as mentioned above), head back into the past, open up the box 935 and pick up the keeper’s tablet from there. After this, get a golden rod from the crash site.

You need to place the keeper’s tablet near the Double-Tap and the golden rod in the slot near the knight’s tomb. Once done, you need to stand in each of the ritual circles and use the right color-coded upgraded bow to charge the circles by eliminating zombies in close vicinity.

Final Boss Fight
In order to get teleported to boss arena, you need to place the soul canisters in the pyramid room. After this place your Ragnarok DG-4 on one or all of the pressure plates (depending whether you are playing solo or with a team). Do so successfully and you will be teleported to the final boss arena.

In order to defeat the final boss fight, you simply need to avoid his attacks by continuously running around in circles. As soon as you see him preparing to launch a lightning attack, use your Ragnarok DG-4 and take cover behind one of the pillars.

If done correctly, the boss’s chest will open up allowing you to deal as much damage with the upgraded bows as possible. Rinse and repeat until the boss falls.

Using the Summoning Key
After being teleported back to the pyramid room, acquire the summoning key from near the pyramid and insert it inside the Bell Tower terminal and congratulations – Achievement Unlocked!

If there is something else you would like to do; make sure to let us know in the comments section below!