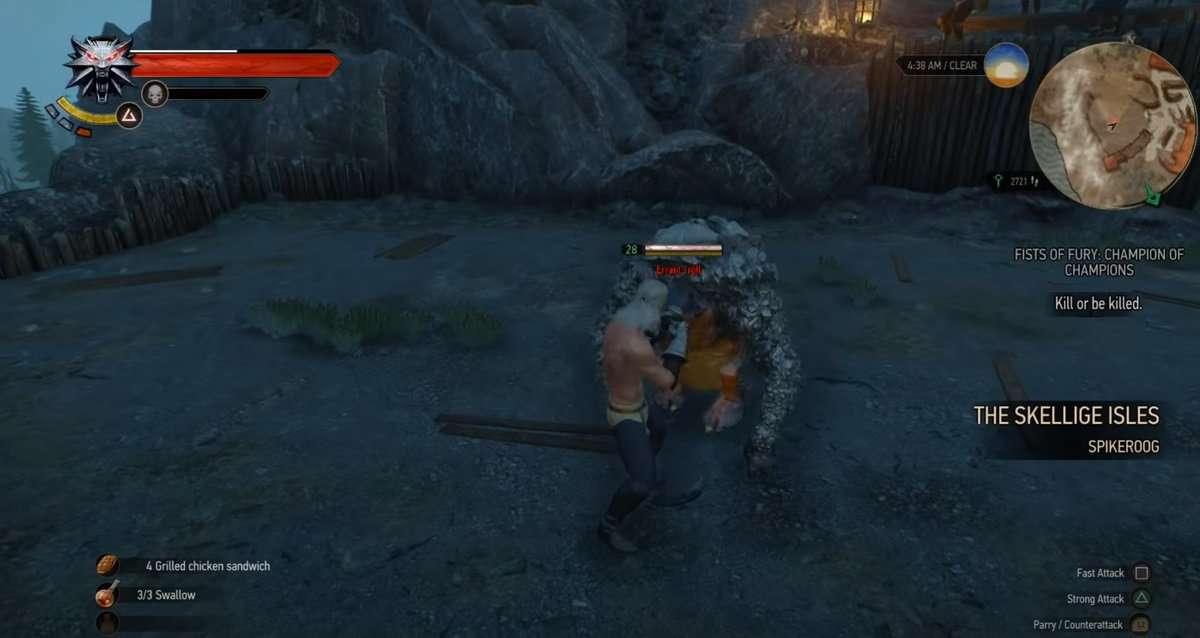 Among the multiple Fistfight tournaments in The Witcher 3, the final fistfight is with a mysterious opponent who is the reigning award holder called the “Champion of the Champions“. Geralt must knock out “Rock Troll” (the mysterious opponent) in the arena to win this title. But before the final fight, there are several prerequisites that must be completed.

Out of 13 fistfights in The Witcher 3 Wild Hunt, 4 of them are in Velen, 4 in Novigrad, and 5 in Skellige. Geralt must play and become champion in these fistfights to get eligible to play and win this final fight and become the “Champion of the Champions”.

The Witcher 3 Champion Of Champions walkthrough

Once you have won all the fistfights mentioned above, a man will approach and ask you to fight the Champion of Champions. He tells Geralt about the arena situated in the village of Hov on “Spikeroog Island.” The final fistfight will occur in this arena as the reigning Champion of Champions is here.

You need to sail to this small island. Once there, you will see a Bookie in front. Interact with him, and he will tell you that the arena is closed due to a certain incident and you have to wait. This will start the “Master of the Arena” quest.

Master of the Arena quest

Besides the arena, you will see two villagers talking under a canopy. Approach and interact with them to know the problem regarding the arena closure. They will tell you about the Ulle the Unlucky, the ghost residing in the arena.

Once fighting with Jarl Thormar (one of his opponents), Ulle stabbed and killed him, and before dying, he cursed that may Ulle lose every fight in the future.

So to complete this quest, you need to enter the arena, and you will find Ulle wandering there. Upon interacting, he will let you know that he is bored, and everyone who enters the arena starts beating him.

You need to start fighting with him and make sure not to attack back because you must lose the fight to end the wraith of this haunting ghost. Let Ulle wound Geralt, and losing the battle will end his curse.

Fighting and defeating Ulle the Unlucky is useless, as he will appear again after some days in The Witcher 3. Make sure to talk to those villagers before the fight, as this will reward some extra crowns after clearing the arena.

Defeat the Champion of Champions

Once Ulle’s curse is lifted, the Master of the Arena quest will be complete. Now you need to visit Bookie again but make sure to replenish your health first. The Bookie will reveal the mysterious opponent and the reigning champion, Errant Troll, for the final fistfight.

One important tip before the fight is to save the game. If you win the fight, you will get the Brawl Master achievement, but if you lose, you will not be able to get it at any cost even if you repeat the quest. So saving the game will give you another chance of getting the trophy in case you lose the fight.

You need to defeat the rock troll to become the Champion of Champions in TW3 Wild Hunt. Errant Troll fights in a similar to most of the other trolls but doesn’t throw rocks at you. You can stagger it quite easily just using your fist. Don’t go for blocking its attacks, as it is useless.

Try to attack it continuously with your fists, as it will eventually list its arms up. The Troll is planning to attack you, but you also have an open window to deal significant damage.

Only dodging works best when the Troll starts attacking in the Witcher 3, and you should focus on it more. Continue to deal damage, and you will eventually win the fight.

Once the Errant Troll is defeated, the Fists of Fury: Champion of Champions quest will complete. The Bookie will approach Geralt and assures him that he will convey the winning news to the four corners of the world, rewarding him with 90 crowns and The Tamer sword diagram in The Witcher 3.