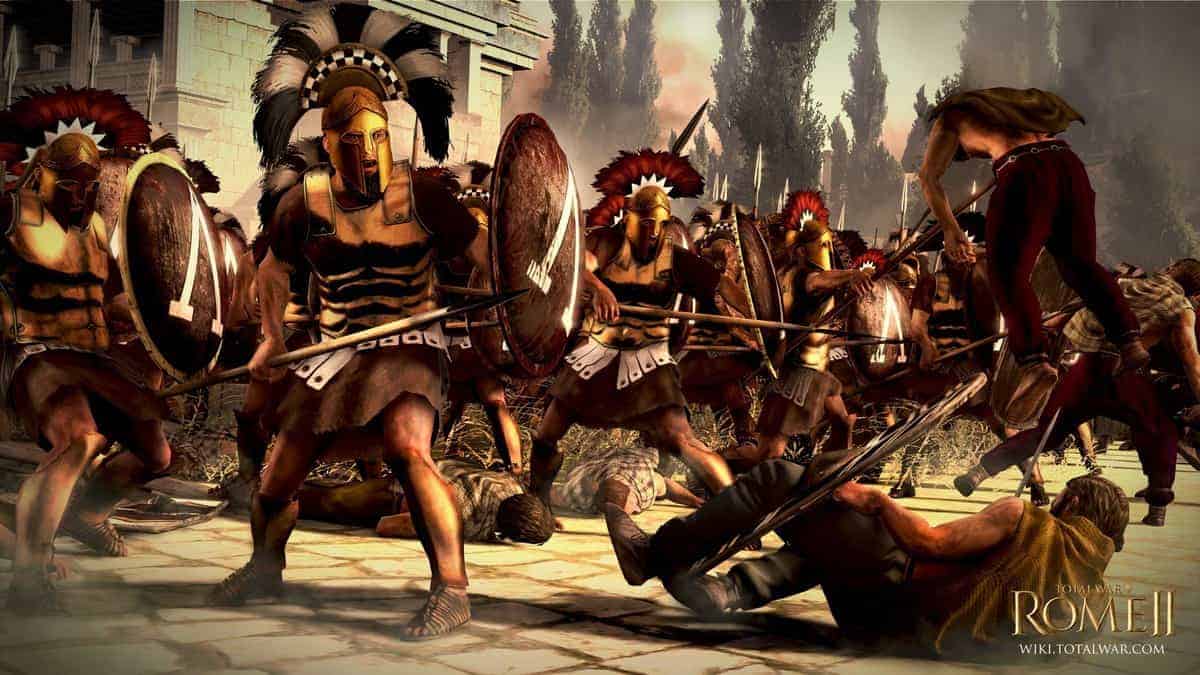 This…is…Sparta!!! I’m sorry but it was hard to resist saying that. The Spartan army makes a proud appearance as a faction in Total War Rome 2, with a mix of tall-and-broad standing on-foot melee infantry and keen missile units. Sparta brings its icon valor and determination on the battle-grounds, making it a force to be reckoned with.

The Spartan army gets its supremacy from its Heroes of Sparta and most other spear wielders, and also acquire additional prowess through the disciplined Spartan Pikemen.

The Spartan army utilizes two Artillery Ships with long range and great damage, ideal for engaging enemy ships and giving artillery support to allies on the land from shore.

Artillery Ships are pretty good most of the times, but like Field Artillery, they are susceptible to enemy attacks and can be destroyed easily. For this reason, it’s always good to have a small unit of soldiers located near the artillery ship till it is guaranteed that there will be no assault on them.

Here are the two units available to the Spartan army:

Their downside? Well, the cost quite a bit, which is why they shouldn’t be used in every other battle. Plus, Artillery ships are slow to sail, so make sure you consider that in fast-paced battles.

Field Artillery units are deployed on the land battlefields and have great use because they can be moved around. This makes them ideal siege weapons for offensive battles. The Spartan army only has a limited set of field artilleries, but they work just as well as any other.

There are two main problems with field artilleries in general, though. One is that they are very weak against ambushes and melee assaults, and are guaranteed to falter in such situations. The other is that though they are moveable, they have a very slow speed which makes them further vulnerable.

So, the best thing to do is have Field Artilleries stationed in regions that are flank-proof, and should only be moved to positions (and from origins) that have already been secured. Remember, field artilleries are expensive units; you don’t want them to be destroyed early in battle because of casual positioning and bad decisions.

Fixed Artillery units are heavier, slower, and much more powerful than Field Artillery units. The only problem with them is that you cannot move these big guys at all, so once they are stationed, they remain there for the rest of the battle.

This makes fixed artillery units ideal for battles in which you are defending, or when you only need heavy assaulting during the initial stages of battle during an offense.

But like field artilleries, fixed artilleries are very prone to ambush and cannot withstand a melee assault. And since they are generally more valuable in defensive battles than field artilleries, and also tend to do much more damage, it is highly recommended that an extra unit is positioned near them at all times.

You can never be too careful, can you?

Sadly, the Spartan army doesn’t have much variety when it comes to cavalry. Only the Citizen Cavalry unit is available to the faction, meaning you’ll be restricted to just one type of unit.

But that doesn’t mean that the cavalry unit is incapable of some amazing feats. Spartan melee cavalry has good armor and weaponry, and are excellent for ambushing enemies and/or attacking flanks, making them viable burst-damage units that are a must-have in any land battle, be it defensive or offensive.

Melee cavalry make best use of trees and hills for surprise attacks, and their speed and Charge Bonus make them excellent against melee infantry.

But perhaps the best trait of melee cavalry assaults is that they cripple the morale of the target enemy unit, which can allow for openings that can be utilized by your other units. For this reason, any kind of offensive/defensive land battle should have cavalry units.

This is where the Spartan faction really shines. While Rome’s swordsmen and Legionaries dominate the battlegrounds, Sparta’s spear-wielding heroes are steadfast, determined, and very, very tough to counter.

What makes Sparta’s military infantry stand out is the fact that they are excellent spear-wielders, which means they can counter Cavalry and Elephant units better than the other factions. This makes the Spartan army very stable and very threatening.

Another major factor that makes the Spartan melee infantry strong is their high willpower and morale. While Rome’s best unit have a morale rating of 55, Spartan Heroes and Royals have ratings of 80, making them very reliable, stable, and overall a dependable set of men.

After all, Spartans were known for their thirst for battle. But because of their amazing damage, morale, and defense, Spartan warriors are much more expensive than the melee infantry of other factions. For this reason, the major portion of your spending will (and generally should) go into recruiting melee infantry units.

Here are the units:

The variety of melee ships offers different approaches to sea battles. When it comes to shore and land battles, melee ships won’t serve much purpose apart, but in sea battles they play a vital role. This is because melee ships are the main sources of boarding for your crew; you will have to get near an enemy ship to do that.

These ship units are categorized according to their speed, defense, capacity, and boarding. Generally, it is best to have a ship with good defense and capacity, but these ships are very slow, and it can be sometimes tedious to catch faster ships.

For this reason, in sea battles a balanced mix of these attributes is required.

The missile infantry units of the Spartan army generally prefer Javelins over bows, which give them great edge against lightly shielded enemies, but sacrifice range.

You do have the Helot Archers to do the normal work, but the more advanced infantry all focuses on pointy long stuff instead of sleek arrows.

This can of course be used to your advantage; the Spartan way of warfare is aggressive, determined, and highly focused, so you can use the javelin-wielder in combination with the fantastic armored melee infantry for some serious harassment, putting enemies on the back foot.

Archers are in general excellent initiators, but are weak against melee attacks because they lack shields. It is thus best to have them protected by a unit of melee assaulters.

Missile Ships are sea vessels that carry missile infantry on them. They are fantastic for initiating enemy ships at range, especially if they are carrying javelin-wielders.

A great thing about the Spartan missile ships is that some of them can also carry artillery on them, making them artillery-missile hybrid ships. They are great for initiating enemy vessels on sea, and are easily one of the major traits of the Spartan army.

The Pike Infantry is what makes Spartan army a tad bit superior over the Roman army. Yeah, elephants and heavy cavalry are great, but they are no match for heavily armed men holding 10 feet tall pikes that can penetrate armor and make elephants seem like cake.

The Pike infantry is fantastic for both offense and defense; they can be an amazing frontline unit to push enemies back, acting like mobile spike-traps. When defending, Pike units can completely nullify elephant and cavalry assaults.

So, is the Pike infantry a complete setup? Not in any way – they are highly susceptible to flanking, with almost no answer to flank and side ambush whatsoever. They are very slow to turn, and generally slow to move, and only attack directly forward, making them somewhat limited in use.

Nevertheless, such a harmonious and deadly infantry is an absolute must-have at the front lines, guarded on each side by other units to ensure they are not hit on the back.