The Witcher 3: The Sunstone Quest Guide 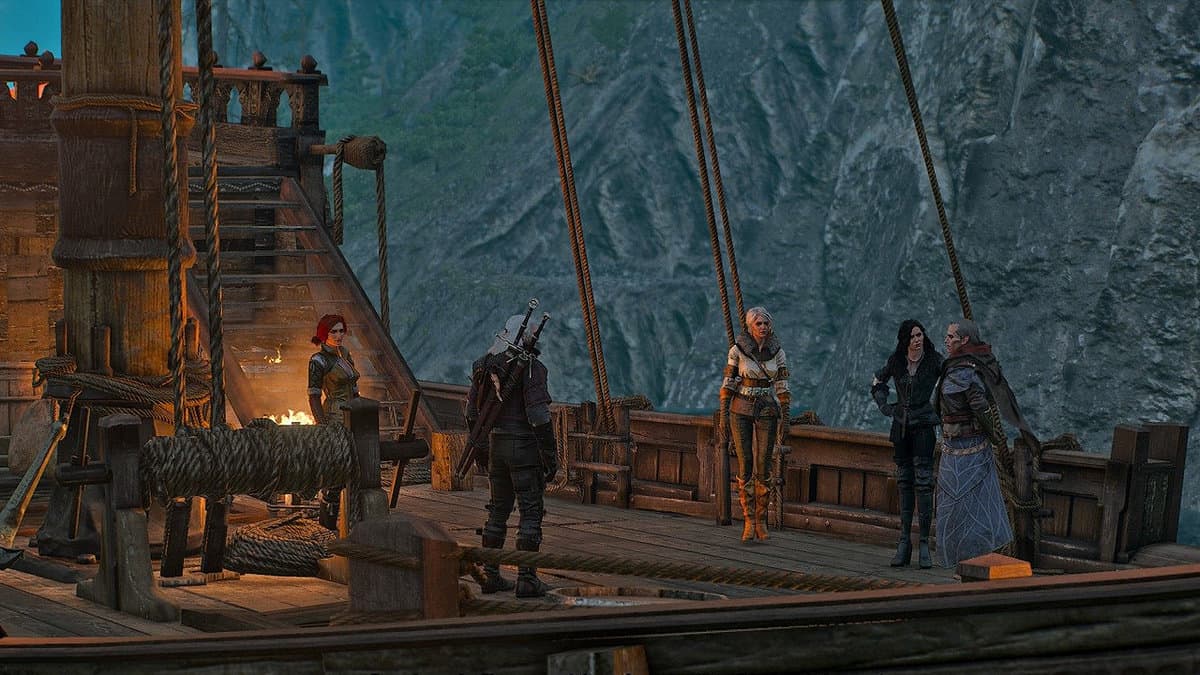 “The Sunstone” Quest is a main quest and part of a series that will ultimately help you complete the “Battle Preparations” main quest in the Witcher 3. It is triggered automatically as soon as you and your companions dock in Skellige. The sunstone is an important item because it will be used to summon The Wild Hunt.

This quest is best done before starting “Child of the Elder Blood”.

The following guide will tell you how to complete the Sunstone Quest in The Witcher 3: Wild Hunt.

The Sunstone Quest will begin after you complete ‘Battle Preparations’ in Novigrad in the Witcher 3. Then you need to travel back to your ship and interact with Avallac’h, who will tell you that all the preparation are set, and they are ready for sail.

After that, your party’s ship will sail for Skellige and as you reach the appointed region, Ciri will mention finding the Sunstone. From here on out your quest to acquire the Sunstone will start.

It is suggested that you must be at least level 27 or above if you want to continue with this quest.

Before you venture out on your journey Yennifer will hand you a letter to show the imperial majesty in order to remind him of what he promised. Since the Sunstone can be on any one of the Skellige islands, therefore you need to meet with Ermion to determine its whereabouts since he is the top magical authority in these parts.

If Cerys or Hjalmar rule Skellige

The quest is largely dependent on who you have chosen to be the new ruler of Skellige. If you chose either the daughter Cerys an Craite or the son Hjalmer an Craite as the new ruler, you can simply head out to the docks. There you will find Crach, approach him and speak with him about Ermion and he will tell you his location which you can visit next.

Ermion will be nearby, so head toward his location to meet with him. As you approach Ermion at Kaer Muire, a cut scene will ensue in which he can be seen arguing with Madman Lugos.

Once you intercede the chat between the two will take a violent turn as Lugos will attack with his ten men. Cut all of them down and take Ermion to safety.

Once the fight is over and you have disposed of the enemies then you will chat with Ermion and he will ask you to follow him. Along the way, you will also come across the capital of Drummond’s land which is known as “Holmstein” as well. Keep moving north with him, there will come a point at which he will stop and speak with you.

If Svanrige has assumed the position of king, then you should travel to the Kaer Trolde citadel. There you will find Ermion with some other folks as well. From here on, your encounter with Ermion will take a different route as when you approach him you will observe Donar, Ermion, Brina, and the king to be in the room as well.

Upon arriving in the room, you will learn from Donar that Birna Bran, who is Svarnige’s mother, plans on reaching an agreement with Nilfgaard. So, the meeting you join will have them speaking with the Nilfgaardian emissary and some guards, but Svanrige goes against his mother’s wishes and kills the emissary.

This is seen as a sign of declaration of war against Nilfgaard so now you will have to take out the Nilfgaardian guards in the room. After that, you can talk with Ermion regarding finding the Sunstone.

Eyvind and the pearl divers

In your conversation with Ermion, you will learn that he doesn’t know the location of the sunstone himself, but he will mention two parties that are interested in this item who may know more than him.

One of these party members is a bard known as Eyvind. To find him you will have to head to the cliff which is located on the west side of Arinbjorn. As you reach the place you will find him on the cliff searching for signs of the legendary white whale “Gevorg”.

As you interact with him you will have two timed options: the first one is that you can offer to watch for Gevorg and learn about elven ruins with him and the second is that you inquire about the whale itself.

You will ask him about the elven cavern for research purposes for an adventure novel. Remember to not mention Ermion and select the options beside it. If you fool him with the other options, he will tell you to head east from Kaer Trolde and there you will find the cavern, but it is only accessible if you travel by sea.

If you accidentally press the option about mentioning Ermion in your inquiry, Eyvind will be displeased with you and will refuse to tell you about the location.

After that, you will have to resort to finding the other party who are the Pearl Divers. You can find them in the underwater cavern. This place is located on the eastern shore which is relatively close to the road to Eldberg Lighthouse in the Witcher 3.

After you locate them and speak with them you will be attacked by some Drowners. Deal with them however you wish and head to Ancient Crypt. This time you also have to meet with Yennifer. You will find her with Philippa and Ciri. After you interact with them, Philippa will come with you in search of the Sunstone whereas Yennifer and Ciri will head out to see the Avallac’h lab.

Note: Once you interact with Yennifer and the rest of the group the quest “Child of the Elder Blood” will also be made available for you to start as well.

To reach the Ancient Crypt you can travel by road or, if you have discovered the signpost nearby, you can fast travel. As you approach the place, a cut scene will play in which Philippa will open the entrance for you. After that, you just need to follow Phillipa.

The crypt is also filled with all sorts of monsters like wraiths, sirens, and some drowners as well, so you should be prepared beforehand to deal with them. At this point during the game, you will have plenty of experience dealing with these monsters so proceed to dispatch them and move forward.

As you make your way across you will come face to face with a broken staircase. Philippa will fix it for you using her magic. After that, your paths will split and you will have two options.

If you head left, you will come across a monster called “Venomous Arachas”. Use the Golden Oriole potion to become immune to poison attacks granting you defense against its attacks. For offense, apply Insectoid Oil on your silver sword to increase your attacking damage.

There will be some chests nearby that you can loot. There is also a hidden treasure but the way to it is filled with booby traps. Use your Witcher senses to weave through the traps and attain the hidden treasure. You can spot a lever here that you can use to turn off the traps, making your journey back safer.

If you take the path on the right, you will have to face a Golem. You can gain the advantage by using Quen to guard yourself against the Golem’s heavy attacks. Moreover, Dimeritium bombs and Elementa oil can come in handy when dealing with this kind.

After this, you can speak with Philippa along the way until you finally come to a room where you will find the Sunstone. But before you obtain it, you will be tasked with completing a puzzle.

The Puzzle of the Mirrors

You will now need to move the other mirror once each for the beam to pass through. But these two mirrors will be guarded by ghosts. Once done, the light beam will fall on the secret door revealing its location for you.

This will also cause Sunstone to appear as well. After this, a cut scene will play in which Philippa will talk to you about the politics surrounding the kingdom and the political schemes she has conjured as well. She will then hand you the Sunstone and take her leave.

Your quest regarding the Sunstone will finish here and you will be awarded 500 XP. You can exit the cavern by retracing the path you took while coming to it or you can explore the ruins for any loot you may have missed along the way.