The Witcher 3: In The Heart Of The Woods Quest Guide 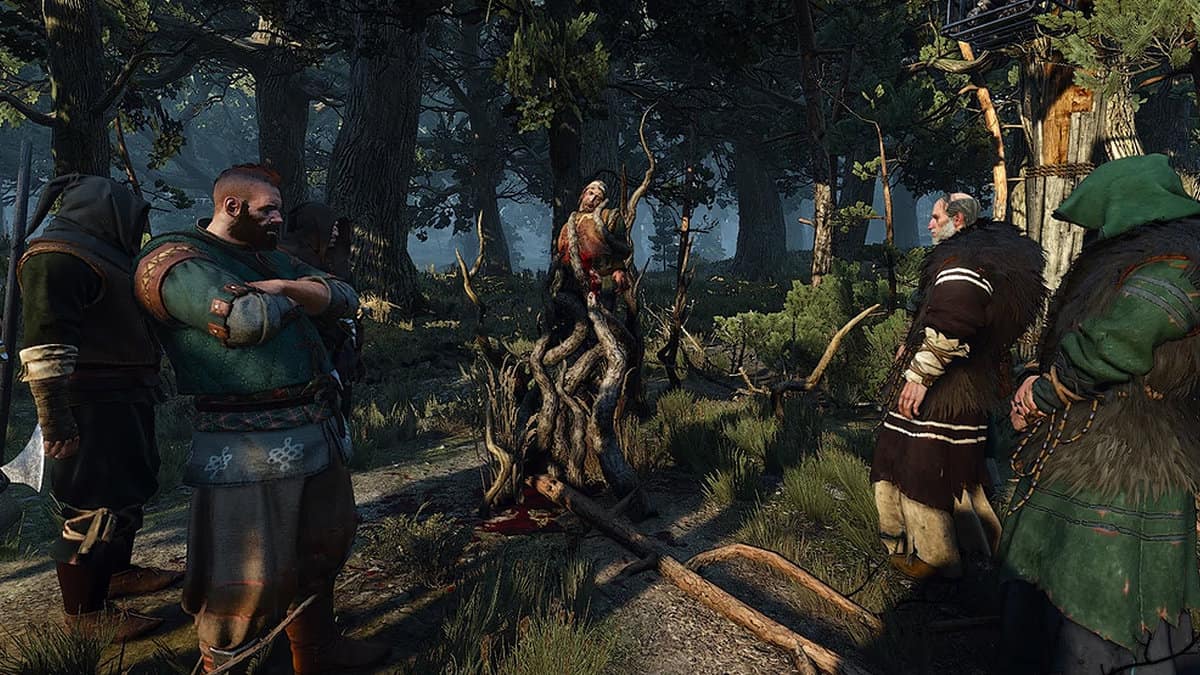 “In the Heart of the Woods” is a Witcher contract that takes place in the Skellige region in The Witcher 3: Wild Hunt. This is an optional quest, so skipping it will not alter the ending of the game in any way. But you will miss out on some great side content that will challenge your sense of morality.

In the quest, Geralt will investigate the true identity of a Woodland Spirit that has seemingly been causing the deaths of some locals. He will need to choose between supporting two sides with opposing opinions, both of which will have different results. As with other quests in the game, your decisions will shape the fate of the villagers.

This guide will provide the information required to complete In the Heart of the Woods quest and explains the different consequences of your actions.

There are two ways to start the quest. You can simply go to the notice board in the Fayrlund area to pick the quest or reach the quest destination directly.

Regardless of how you triggered the quest, make your way toward the southwest side just outside Fayrlund, and look for a group of people near the road. Approach the group, and you will become part of the conversation automatically.

You will learn some sort of creature has been killing people around the village. Two groups, one led by Harald and the other by Sven, will be arguing the matter.

The older man, Harald, will speak about letting the beast be and honoring the old ways arguing doing so made the villagers strong warriors. Sven, on the other hand, will speak about dealing with the matter once and for all by killing the monster.

Talk with both NPCs at length to listen to their reasoning and then proceed to the forest to find out what you’re dealing with.

In the Heart of the Woods walkthrough

Before picking any side, you need to investigate and find the true identity of the creature. Follow the trail present on the scene and reach the area with a dead dog. You need to examine the dog to find any clues.

Continue on and you will come across another dead body. Examine it to learn more clues and then make your way to the final clue. Here, you are going to encounter many wolves. Killing them is the only way out. After eliminating the wolves in the wood, examine the scratch marks present on the scene.

Geralt will deduce the creature is a Leshen, an ancient forest spirit. You can head over to your bestiary to know more about Leshens, but chances are that there won’t be much at this point of the game.

The debate between Harald and Sven

Harald represents the elders of the village and wants you to leave the Leshen alone. He believes that the spirit is the reason why the village warriors are the strongest in Skellige. He also believes that the people who died during the ritual sacrificed themselves to save their ancestors’ pact.

Sven, however, wants you to kill the Leshen. He does not believe in any pacts or rituals that Harald keeps going about.

You can choose any side you want but note that each side will result in a differing ending of the quest.

If you side with Harald

If your choice is in favor of Harald then the Leshen will survive at the end of the quest. You will be directed to go to an altar used by the villagers to make offerings to the Leshen. Five white wolves will spawn as you get close to the altar, fight and kill all five of them.

You must take five hearts from the bodies and then offer them to the Leshen at the altar. Place the hearts on the altar, initiating a cut scene that indicates the acceptance of the pact by Leshen.

Return to Fayrlund and report back to Harald who will be pleased with your work and give you your reward. You can approach his dialogues in any manner. You will see Sven coming with his pack, claiming to have eliminated the rest of the village elders and coming for Harald.

You can help Harald by eliminating Sven’s group or just letting them settle things on their own. However, in any way, your quest will be complete no matter what.

If you side with Sven

The first thing you are required to do after deciding in Sven’s favor is to find the marked person. There will be no trail to follow but using your information about Leshens, you can track them down via the flocks of crows present at the location.

Make your way towards the last house located in the west, you will find several crows sitting on top of the roof. You will use your witcher senses to find out the marked person. The marked person will be a girl named, Hilde, who has a thing going on with Sven.

Head back to tell Sven about Hilde and offer options that the person could be killed or exiled from the area. Then talk about the marked person, revealing Hilde’s name to him. He will agree to both methods.

You can eliminate Hilde or go for the exile method making her leave town.  No matter what method you use after dealing with her move toward the woods.

To bait the Leshen to appear, you will need to destroy its totems. There will be three in total that you will have to destroy. The first one is easy as it’s not protected by anything. However, to destroy the other two you need to kill multiple wolves protecting it. Kill all the wolves and destroy all of them.

Once all of the totems are gone, the Leshen will appear and you have to track it down using your witcher senses. Make your way toward the designated area and a cutscene will start. You will see multiple wolves appearing along with Leshen.

Eliminating the wolves is a pretty straightforward process but the Leshen can be a pain. Use Relict Oil, Igni, and fire-based bombs on him to even the odds.

As long as the Leshen is on fire, it won’t attack giving you a window to lay down some punishment on it. Kill all enemies and loot the Leshen’s corpse to get the Leshen trophy and then head back to the village.

Upon your return, you will find all the elders murdered including Harald. During your fight with Leshen, Sven gathered his men and killed every elder present in the area. Sven will ask you to leave stating that your work here is done. This marks the completion of the quest.

You will gain Assassin’s boots, 60 crowns, and 50 XP upon completion of the quest by siding with Sven.