Sunset Overdrive Weapons Guide – How to Get, Leveling and Tips 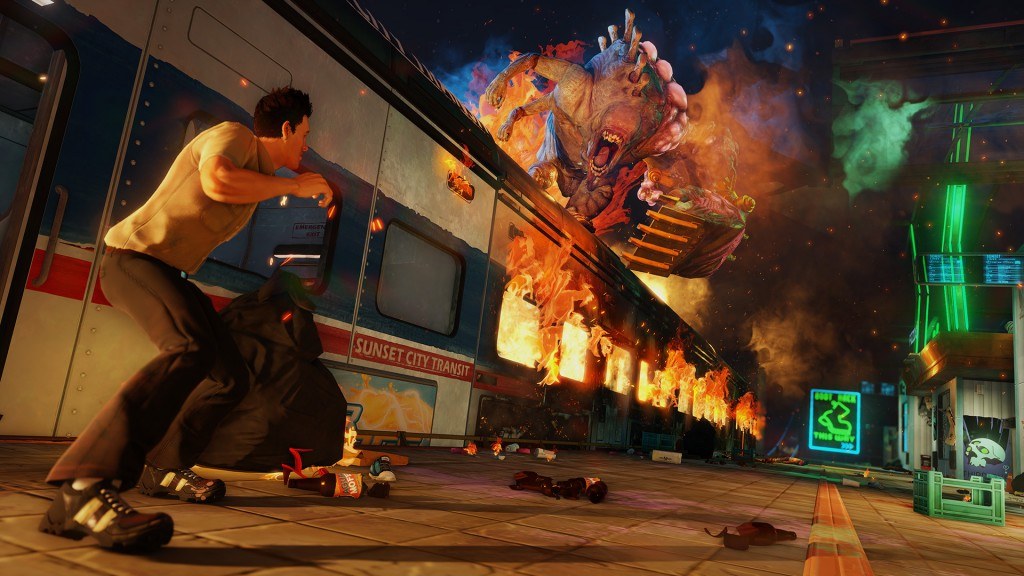 Awesomepocalypse is nigh and you’re frustrated. What’s better than to let out your frustration on gazillion of mutants crawling through the Sunset City? Guns in Sunset City are in abundance and there are no boundaries.

Throughout your Sunset Overdrive journey, you will come across all sorts of wierdly cool weapons to put down mutants. Experiment with these weapons and find the one that works best for you and customize it further to complement your unique playstyle.

Weapon Effectiveness Against Different Enemies
If you check the Weapon Stat screen, you will see that every weapon is ranked for its effectiveness against different kinds of enemies. The ranking is done on a scale of one to four:

However, these stars do not alter the secondary effects of a weapon.

Leveling Up Weapons
Every weapon in the game begins at Level-1 and slowly progress to Level-5 which is maximum. With each increasing level, you will receive increased base damage, ammo capacity, and secondary attributes.

At Level-2, you can also add AMPS to your weapons to make them even deadlier. To level up a gun, just keep on killing enemies. Simple as that!

For most effective results, target those enemies for which you get three-star or four-star on your weapon.

Getting Weapons and Ammo
Weapons are basically earned by two means: playing the Story Mode and playing the Chaos Squad. Complete every Main Mission, Optional Quests, and Challenge; and you will unlock almost every weapon the game has to offer either in your Inventory or from Two Hat Jack.

Chaos Squad is particularly useful to earn even the most expensive weapons for absolutely nothing! At the end of each Chaos Squad Match, you will receive Spinners which usually contain Costume Items, Cash, Overcharge, Upgraded AMPs, and Weapons.

It depends upon players whether they wish to buy weapons from Two Hat Jack or get them by playing Chaos Squad.

Similar to weapons, ammo can also be bought from Two Hat Jack for a cheap price. You will also find ammo from dead foes, ammo crates, and other pick-ups.

Deployables are sent into the environment where they act on their own for a fixed period of time. Deployables are exceedingly useful tools for taking out hordes of targets in a single areas and include weapons like Taunt Bots, Turret Copters, and Proximity Mines.

This weapon is extremely useful against OD and Scabs. You can consider it somewhat like a shotgun, but with less damage output. This weapon can knock back enemies and has a chance to set them on fire which deals pretty high damage.

This weapon has a below-average damage output, but its high rate of fire makes up for it. This is an ideal weapon when you need to take out hordes of incoming OD. Like you can see from the Weapon Susceptibility, other than OD, this weapon is not that great against other types of enemies.

This weapon is capable of taking out Scab Shooters and Rushers with a single-shot. One good thing about Dirty Harry is that its bullets do not have a traveling time. Aside from this, it has a high rate of fire, but lacks when it comes to ammo capacity.

This is one below-average deployable in the game. There are some downsides of this weapon which include small coverage area and non-mobility. Place it on rooftops and doorways along with other deployables like Taunt Bots for most efficiency.

Once the Freeze Bomb explodes, it freezes every enemy in 6.5 yards radius for 12 seconds. Freezing does not deal any additional damage to enemies, but you can swap to other weapons and shatter frozen enemies. Bigger enemies like Herkers, Muggers, and Spawners require more than one shot to freeze. Freeze Bomb is one of the best weapons when it comes to pure crowd control.

This weapon has more base damage than Dirty Harry, but lacks in high rate of fire and its projectiles have a small traveling time. Due to its high damage output, this weapon is particularly useful when it comes to taking out Wingers, Herkers, and other large enemies.

If the harpoon from the Captain Ahab misses an enemy and gets attached to a wall, it will create a pool of Overcharge for 15 seconds which will attract enemies in close vicinity.

This Rocket Launchers either detonates on impact or after 2 second of being fired. Enemies need to be within 3.5 yards radius to take full damage from it. While playing the Chaos Squad, TNTEDDY works well for DoT and Crowd Control. Lastly, note that this weapon does not hurt you and allies even at point-blank range.

This weapon works best when it is charged by holding the fire button for about 2 seconds. It is particularly useful against bosses and large enemies. For the most effective killing, follow up a charged shot with a normal one.

The Roman Candle – Auto
How to Acquire: Complete Big Trouble in Little Tokyo and buy it for 15,000 Overcharge
Weapon Susceptibility:OD 4, Scabs 4, Robots 2, Bosses 2

This is an excellent weapon for crowd control and allows you to spray and prey as you move down the streets of Sunset City.

The projectile from the Murderang will always return to you, but the rate of fire is slightly higher than the rate at which the projectile returns to you. However, if you use this weapon with Recycler Weapon AMP, you will never run out of ammo. Although this weapon is not great when it comes to its damage output, hitting an enemy multiple times has its own benefits.

Proximity Mines will stick to enemies and will detonate after two seconds. This is a useful weapon for taking out large targets like Blowers and Gunkers. You can also stick them to different surfaces while protecting a barricade.

One-Handed Dragon – Single-Shot
How to Acquire: Complete The Fall of Emperor Norton and buy it for 10,000 Overcharge
Weapon Susceptibility: OD 4, Scabs 3, Robots 1, Bosses 3

You can stick the projectiles from One-Handed Dragon which will detonate after 2 seconds and will deal fire damage to all targets. You can also attach the projectiles to any surface and all nearby objects will catch fire.

This thing is a robot devastator! Although it lacks when it comes to its slow rate of fire and projectiles’ traveling time, but nothing kills robots better than this thing.

The shot from the Hair Spray Bomb hits the primary target and creates several additional bombs which will travel to other targets and detonate. This is a useful weapon to clear out the areas swarming with enemies in no time.

This weapon works as a decoy and creates maximum of two bots who will attract enemies’ attention so that you can attack them from behind. It can also be used to setup different traps and to make enemies come after it.

The Shocker – Auto
How to Acquire: Complete The King’s Feast and buy it for 70,000 Overcharge
Weapon Susceptibility: OD 3, Scabs 2, Robots 4, Bosses 2

This is one of the most useful weapons for keeping enemies pinned down. Just keep on pressing the fire button and the enemies will get stunned and take electrified damage after every second. You can easily hold a large enemy or an army of smaller enemies in their position.

This classic Assault Rifle is oddly fun to use in a world where everything has gone nuts. This is pretty fine weapons in all its attributes and can take out all sorts of enemies with relative ease.

Shorty Shotty – Single-Shot
How to Acquire: Complete The Siege of WonderTown Land and buy it for 20,000 Overcharge
Weapon Susceptibility: OD 2, Scabs 4, Robots 3, Bosses 2

If you are not using this weapon at close range, then don’t bother using it at all because you won’t be dealing any considerable damage. This can make quick work of Scabs and Robots, but again at close range. Furthermore, this is highly ineffective against OD.

Pulse Mine – Deployable
How to Acquire: Complete Getting the Band Back Together
Weapon Susceptibility: OD 3, Scabs 2, Robots 4, Bosses 3

When used, this creates a pool of green pulse which will damage all enemies standing in it for 15 seconds. Players can place 3 Pulses at the same time and each will damage enemies independently. The best way to use this is to combine it with Taunt Bots and Overcharge from Captain Ahab.

Charge Beam – Auto
How to Acquire: Complete Getting the Band Back Together and buy it for 100,000 Overcharge
Weapon Susceptibility: OD 3, Scabs 2, Robots 4, Bosses 3

This weapon has the highest DPS than all weapons in the game and pierce through any enemy without any issue. Do note that it takes a moment to charge before you could fire it.

This weapon has the highest base damage than any other weapon in the game. Although this weapon has a small clip size, but it rarely matters since it only takes a couple of shots to take out even Herkers at Level-5. You can only acquire this weapon from Chaos Squad Spinners.