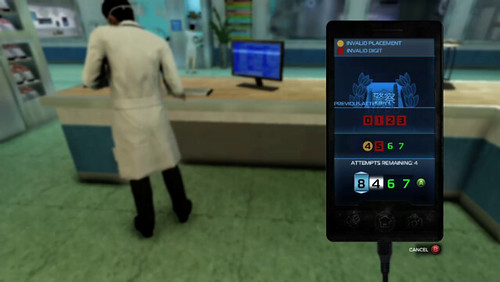 There are six mini-games that you can play in Sleeping Dogs. We have already talked about Hacking and Lockpicking in our Spy Cameras and Lock Boxes Guide but for those of you, who haven’t read those guides, we will explain them briefly here as well.

Other mini-games include: Bug Planting, Phone Tracing, Safecracking, and Karaoke. Additionally, you can gamble your hard-earned money to ride your luck in hopes of making more money by playing Cockfighting and Poker Mahjong.

Bug Planting
You will learn to plan ‘surveillance’ bugs during ‘Listening In’ main story mission. Planting bugs involve a small mini-game in which you must calibrate the audio sensitivity and frequency separately.

Trick is to remember the numbers each attribute was calibrated at. This will make calibration a lot easier. In some cases, you will need to open a vent cover by removing the screws before you can start calibrating the bug. Replace the vent cover after the bug is planted.

This is important to keep the bug hidden from the plain eye-sight.

Hacking
This mini-game is introduced during the second lead of the ‘Popstar’ case. It basically allows you to hack Spy Cameras and password-protected computers. Trick is to get access to these within six attempts by cracking a four-digit code, using the numbers from 0 through 9.

These passwords are randomized so you will have to play the mini-game every time you attempt to crack a password-protected computer or a spy camera.

Lock Picking
You will learn Lock Picking during ‘Listening In’ main story mission. Every lock you come across consists of up to five pins, and using your pick, you need to move the pin upwards until it turns green. From here, pull the pin to the left and repeat until all pins are in place and lock is opened.

If you make a mistake, lock will set one space to the right so you will have to calibrate it from the right to the left again to open it, and it will be difficult under pressure.

Phone Tracing
It is a slightly trickier mini-game in Sleeping Dogs and ironically; you will be playing it a lot. You will learn phone tracing during the ‘Hotshot’ Case and ‘Mrs. Chu’s Revenge’ main story mission.

It starts with your smartphone showing your position relative to the three major cell phone towers in Hong Kong. Go to the specified center of the triangle they form and scan the four sections of the city to get a general location of the call you are tracing. Scan the section with the most green bars. This will give you a detailed view of each section, showing you the three main towers on the outskirts of the map.

Note that when you select a tower, it emits a pulse that briefly shows the other reception towers they connect to in the area. Keep scanning the major towers until you see a reception tower all the main towers share. Scan it and it will give you the caller’s location.

Practice it since you will doing that a lot.

Safe Cracking
You can crack a safe using your cell-phone. Interacting with the safe will open a sound-sensitive program that will hear the tumblers of the safe as you attempt to unlock it.

Karaoke
This mini-game will be introduced during ‘Club Bam Bam’ main story mission. It requires you to sing eight different classic songs. To sing better, keep the singing pitch in line with the indicated notes as they scroll in from the right side of the screen.

Cockfighting
Complete the ‘Night Market Chase’ main story mission to unlock this mini-game. It isn’t really a good choice when it comes to making money, but if you have time and want to ride your luck, you can give it a shot. It requires a lot of time to match your two choices of fighting and yet, outcome is out of your hands. I wouldn’t prefer this mini-game if you are looking for cash since it is too random.

Poker Mahjong
This is another mini-game of chance. It will be unlocked after ‘Bride to Be’ main story mission. In Poker Mahjong, house and player are given five tiles a piece, valued from one to six, and pay outs are warded for eight hands subjected to your hand being better than the house hand.

From highest to lowest:

When house and player get the same hand, winning factor will be the value of the tiles. For example, if you have a full house consisting of three 1s and two 3s, but the house has a full house of three 4st and two 5s, you will lose the game. Only way to beat that is with four of a kind or five of a kind.

Each game consists of three rounds. During first round when you are dealt a hand, you can either discard the tiles in order to pull the fresh cards from the pile, or you can keep your current hand. Second round goes the same way, but in the third round, you have to present the hand you have built in the previous two rounds.

Unlike Cockfighting, Poker can be won by paying attention to both the tiles and hand the house has and is discarding with each round. Because tiles that are discarded are put back into the pile and there is always a chance that you will be drawing them in the next round. You can avoid specific hands from the house by playing carefully.