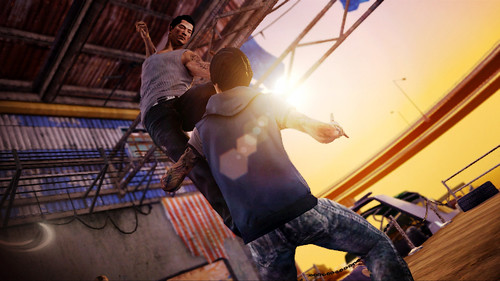 There are three kinds of Sleeping Dogs Jobs that you can take part in. They become available to do during different points in the main story. Completing these jobs builds up your face level, and they are also a great source of income.

For more help on Sleeping Dogs, read our Events, Favors and Mini-Games Guide.

After the Main Story mission that introduces you to the martial arts training school, four martial arts clubs open up around Hong Kong. Wei Shen fights at each of these clubs earning cash and new clothing.

If you have a heat level or you attack any spectator then Wei will not be allowed to enter the Martial Arts Club. The mini-map Marker disappears and even if the you go to the Club, you’ll find it empty.

Wearing the Lightning Warrior Outfit in Martial Arts Club is going to make Wei lose his sword as well.

When you enter the Martial Arts Club, all the weapons that Wei has dropped will disappear. If you part a vehicle nearby then you can extract the weapons from its trunk.

You are allowed to use both, the melee weapons and firearms, in the Martial Arts Club

The rules at each club are quite simple: Survive by using everything you have in your hand-to-hand arsenal. The first of these clubs is found in North Point, literally next door to the martial arts school. It’s the easiest of the four clubs, so it’s a good target early in the game.

Martial arts clubs also count as jobs toward your completion total. All the clubs can be challenged again to earn another cash reward.

North Point martial arts club starts the first wave with one opponent, and ramps up to seven fighters by the sixth wave, involving a group of regular thugs, Brawlers, and Grapplers. There is a decent amount of room around you in this club, so if the need to fall back and catch your breath comes up, you can do that.

At the back of this club is a railing overlooking a fairly long drop, you can chuck enemies over this railing getting rid of them immediately if you are feeling overwhelmed while also building up your Face Meter quickly.

This is the second of four martial arts clubs, featuring both an increase in difficulty and in reward for successfully beating down the opposition. This arena is smaller compared to the earlier one but conveniently there are more places from where you can throw your enemies down use this to your benefit.

Be warned there’s a good chance you’ll fall out of bounds and will be forced to start all six waves from the beginning. Speaking of those six waves, it’s a slow start as before, with a single thug facing you on the first wave, building up to a nine-on-one fight for wave six.

This is the third of four martial arts clubs, featuring both an increase in difficulty and in reward for successfully beating down the opposition.

The Kennedy Town club doesn’t have a convenient ledge to fling people off of, so be prepared to do it the old way of slugging it out with these thugs. However, there is one environmental hazard you can exploit. Slam thugs head-first into the nearby cargo containers.

This club also features an increase in the number of enemies taking you on in each wave with the sixth wave featuring a dozen opponents of various types. Remember to time your Counters well to avoid getting caught in the middle of the recovery animation for missed Counters. With so many opponents in the later waves, mistakes can be very costly.

Specifically be careful not to let anybody grab you from behind. The amount of enemies in this club is too large for you to give them an opportunity to attack you while you are incapacitated. If this happens, it will drain a major part of your health.

This is the last of four martial arts clubs, featuring both an increase in difficulty and in reward for successfully beating down the opposition. Aberdeen Martial Arts Club is the hardest to beat.

The place where you fight is very confined and the number of enemies far more. This mean you would not get any room to maneuver or get a moment to catch your breath. Furthermore, this club does not provide you with quick ways to finish off your enemies like chucking them over railings.

The final wave puts you up against thirteen opponents, with every preceding wave featuring more opponents than you’ve seen per group at other clubs. This will likely be the hardest test in hand-to-hand combat you can face early in the story. If you’ve made it this far, you already have a fairly good idea on how to deal with large crowds of enemies, and those lessons still apply here.

There are twenty targets to steal being driven around Hong Kong. This is an incredibly lucrative job, if you’re able to deliver the cars in mint condition. Early rides aren’t worth so much, but some of the later cars you’re asked to bring in are worth hundreds of thousands in HK dollars.

The best way to set up the car heist is to park your own car in front of the target car to make it stop without any trouble. Action hi-jacks are not the best options as you will most definitely smash into other cars while performing them.

Remember not to let the police witness your act of stealing as this will make them follow you and cause damage to your stolen car. Remember the more damage the car suffers by your fault or any others the less you are paid for it when you deliver it.

If you feel the target has taken too much damage, just drive it into the ocean and try again.

Roland Ho is a money lender and debt collector connected to the Sun On Yee. There are five important debts that Roland wants Wei to handle, plus an additional side job that can be handled at any time you just happen to see the opportunity.

Including the work done for Roland during the “Uncle Po” Main Story mission, there are six Debt Collection jobs.

Knox Armored Vans
Knox is a company that handles money transfers between banks and businesses, and they happen to be in debt. They have refused to pay, so Roland wants Wei to bring their money vans to him.

Any time a van is in your general vicinity, it will be marked on the mini-map. You can then Action Hijack the van and drive it to the designated garage for a cash reward. If you are out of cash, keep on the lockout for these vans.

Samson can be found on an overpass in North Point. He’s a surprisingly quick freerunner and leads you on a winding chase, but eventually he gives up after an exciting series of jumps and vaults, and you catch him atop the overpass. Samson immediately relinquishes payment and runs away.

Norbert owns a massage parlour at the center of Kennedy Town. He’s got police protection, and says that you can’t touch him without getting into serious trouble with the law. Technically, he’s right.

The answer to this problem is to vagrants. The nearby alley is full of vagrants you can offer a cheap bribe to. With them in tow, go back to the massage parlour and watch the vagrants be themselves.

Norbert immediately succumbs in hopes of getting rid of his new customers.

Once you catch up to Terrence and have had enough of his lies throw him into the trunk of his own car, and then get driving.

You’ll need to be at or approaching top speed for 30 seconds straight to scare him into paying. However, don’t alert the cops during this!

After you speed for 30 seconds, you can pull Terrence from the trunk to get the payment.

Tommy is a cop, which makes enforcing the payment a bit more difficult. You can’t touch him but there is always his wife. Go to the hospital in Central and throw her into the trunk of your car. Be sure not to accidentally kill her, as she’s not one for much punishment.

With Mrs. Wu stuffed into your trunk, drive her to Roland’s assistant, following the winding mountain road towards Kennedy Town.

After you reach the assistant, pull Tony’s wife out of the car and hand her off to him. Take a picture of the man holding a gun to her head. With the bait successfully created, it’s time to go meet with Tommy in Kennedy Town.

Go back to Tony show him the picture and collect the debt from him.

Go pick up Roland from his Impound Lot first, and then drive out to Samson’s location: the park close to the wedding banquet hall.

As you walk up to Samson he will start running. Eventually, Samson traps himself on another walkway, caught between both Wei and Roland. Wei tries to talk some sense into Samson, interested only in getting the payment, but Samson has his own solution to his debt woes. In the end, Wei refuses to handle any more collection jobs for Roland.