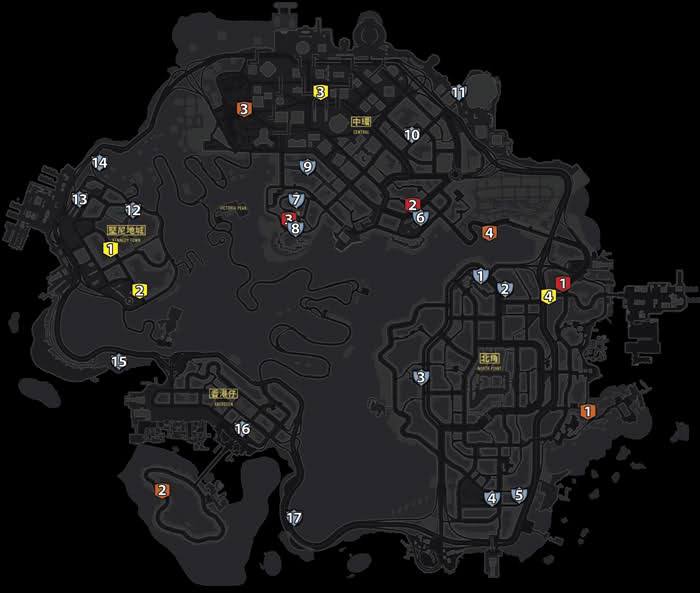 There are four types of Sleeping Dogs Random Events that become available at different points during the main story missions. Each event provides a cash reward along with a Face point bonus.

There are seventeen Drug Bust missions that open up after the second lead in the “Popstar” Case, and all Drug Busts follow the same three steps.

Step 1
Beat up the Triad members at the assigned location. After reaching the necessary body count the rest will run away. You get $2000 for doing this.

Step 2
Hack the nearby Spy Camera. You’ll need to find the control box of the camera in question, try following the wire leading off the camera. Once you’ve found it; you be faced with a mini-game where you need to guess a four-digit password that is randomly generated.

Step 3
Either return to the safe house in North Point or the Aberdeen Boathouse and access the cameras you’ve hacked. Then identify the leaders of the drug-dealing ring you’ve beaten up. They’ll get arrested, and you get cop points and cash.

Some Drug Bust locations require either a boat or some swimming to reach. Those will be indicated in their short description.

Drug Bust: Lu Mei Alley
Location: North Point
Though it’s called an alley, the hangout for the thugs is right up against the street, which gives you plenty of moving environmental hazards to throw them into if you’re so inclined.

Drug Bust: Kam Chuk Overpass
Location: North Point
The little space near the stairs up to the overpass is somewhat restrictive, but you have direct access to the streets to throw thugs into traffic, and there are a few phone booths you can use to take out thugs quickly.

Drug Bust: Foo Long Overpass
Location: North Point
A very similar layout to the Kam Chuk Overpass hangout, you’ve got plenty of environmental hazards to thin-out the lowlife population quickly. However, the control box for the camera will require you to climb up the stairs to the overpass and cross the bridge over the street to reach it.

Drug Bust: Denlau Alley
Location: North Point
Another hangout with an unfortunate lack of environmental hazards. It is still possible to seriously harm or knock out a thug by throwing them off of the raised area where the gang all starts off. If you’re sneaky, you can approach the hangout from the streets and hack the camera first, but you still need to beat up the gang to complete the Drug Bust.

Drug Bust: Sui Shan Alley
Location: Central
Things start to escalate with this Drug Bust. The goons are starting to come more often armed with knives, cleavers, and tire irons, which will make grappling more difficult. There’s a dumpster and a fuse box you can use against the enemies here.

Drug Bust: Tsim Shan Shan Alley
Location: Central
This is an interesting location, as civilian vagrants can become involved in the fighting. Be careful where you throw your melee weapons. They can kill a pedestrian in one shot and quickly alert the police.

Drug Bust: Wang Fu Parking
Location: Central
The lot across the street from the K-Bar is the setting here, and there’s a number of phone booths, air conditioner units, and even a fuse box at your disposal.

This is another high-traffic area that can get civilians caught in the fighting, so watch where you swing. Don’t forget that you can also use parked cars as improvised weapons!

Drug Bust: Mong Memorial Overpass
Location: Central
The hangout is isolated from the streets, which makes cop or civilian involvement less of an issue. The alley is wide enough that if you want to mix things up a bit, you can take a car into the area and run down the gangsters before hacking the camera.

Drug Bust: Wah Fi Storage
Location: Central
This underground storage garage packs the enemies close enough that the melee weapons they come armed with are easily exploitable against the initial group. The tight space means you will not need to run very far with Grappled enemies to slam them into walls for extra damage.

Drug Bust: Central Sewage Outpoint
Location: Central
The first of the sewer-based Drug Busts! You’ll need to either swim or find a boat to access this location. One of the side passages contains a pistol, which will come in handy here, as every thug is packing heat. To get to this location, you’ll have to use a boat, or swim through the entrance from the sea.

Be careful if you’re taking this on early in the story, as you may not have much in the way of health. Make sure you come with a health regeneration buff at the very least!

Drug Bust: Sun Yat Sun Housing Complex
Location: Kennedy Town
The small park in front of the housing complex is raised up from the street, which will hopefully keep civilians uninvolved in the ensuing gun battle. Make sure you prepare for reinforcements to flood in from the streets.

You’ll want to have as many bullet time upgrades as you can muster, which will help you eliminate more targets that much faster. Complicating things is the fact that the HKPD will get involved very quickly, which means you’ll have to escape them once you’ve cleared the area, then come back to actually complete the hack.

Drug Bust: Wong’s Parking
Location: Kennedy Town
Much of the lot is clear of obstacles, but the thugs all start close to a variety of environmental hazards. If you can pick out the unarmed standard goons from the crowd, you can eliminate quite a few opponents before you get to work on the Brawlers and Grapplers.

The big worry here is the sheer number of thugs you’ve got to put down before the area is considered clear, and the fact that nearly every thug, including Grapplers and Brawlers, is likely to be carrying some type of melee weapon. This extreme test of your skills may be a bit much to handle early in the game, but it is totally possible to slug your way through the fights if you effectively use your Counters.

Drug Bust: Water Pollution Control Center
Location: Kennedy Town
Another sewer hangout, there’s not as many environmental hazards to use here, so you’ll have to rely more on Wei’s skills. Watch for opportunities to knock thugs into the water.

Drug Bust: Chiang Mai Sewer Interchange
Location: Aberdeen
Similar to the Central Sewage Outpoint bust, you’ve got another gun battle against a determined squad of thugs here. As always, come to a firefight buffed up. There’s not as much cover here as there was with the other sewer firefight, so you’ll have to make your bullet time Action Vaults count and eliminate as many targets as possible with each attack.

Drug Bust: Yen Yen Foo Long Underpass
Location: Aberdeen
The underpass hangout typically has a civilian janitor doing his best to dust the dirty floors near the thugs, so watch how you jump into the fray. The control box for the camera is placed on a pillar away from the initial starting location of the thugs, facing out towards the street, so it can be easy to miss if you’re in a hurry.

Drug Bust: Aberdeen Sewage Outflow
Location: Aberdeen
As with the Chiang Mai Sewer Interchange, you can expect a firefight under very similar circumstances. The best cover to use for bullet time Action Vaults is limited, so you’ll have to make each vault count. Keep an eye on your mini-map during this fight to avoid getting flanked by the thugs.

Four Shoplifter events become available as you complete the Payback Main Story mission. These events, like all others, do not appear on the in-game maps unless you draw close enough to trigger them. Without knowing where to look, it can be tough to track down events to complete them.

Shoplifter missions are easy to resolve, and they all involve some form of removing a rowdy customer from the premises of a legitimate business establishment.

MQ Mart Drunk
Location: Kennedy Town
Reward: HK $2500
The MQ Mart is harassed by a drunk who is destroying all of the sunglasses on display. Drag this guy to the indicated car and throw him into the trunk. The driver takes him off to points unknown.

MQ Mart Loitering
Location: Kennedy Town
Reward: HK $1500
Literally down the street north from the MQ Mart Drunk incident location, a rowdy customer is harassing another MQ Mart in the southern portion of Kennedy Town. This time around, you need to take the offending individual to a nearby dumpster and throw him into it.

Mall Loitering
Location: Central
Reward: HK $2000
Another drunk is scaring customers away from a shopping center located near an overpass at the center of the Business District. As before, drag the vagrant away from the shop without killing him.

Dim Sum Loitering
Location: North Point
Location: HK $2000
A drunk is harassing a small restaurant relatively close to the waterfront. To resolve the situation, grab the drunk and pull him away from the mini-map-indicated radius surrounding the restaurant. While it may be tempting to throw him into an environmental hazard to get rid of him, that isn’t the goal. You only need to move him away from the restaurant.

Hit and Run events are basically you chasing people who steal from Calvin, it begins with a footrace, the thief eventually gets in a car or something, then degenerates to a fight once you’ve run him off the road.

Hit and Run: Bus Stop
Location: North Point
Reward: HK $2000
Calvin loses a bag of fake money to a thief as you approach. The chase takes place near the bus stop you take Siu Wah after the attack on Dongeyes’ warehouse. Don’t let him get away.

Hit and Run: Repo Yard
Location: Central, just north of Sui Shan Alley
Reward: HK $2000
An 18k member steals the minibus payments, and of course it’s up to you to get them back. The footrace takes place in a crowded street so be careful not to run into people. There’s a vehicle section here too.

Hit and Run: Soho
Location: Central, near Wang Fu Parking
Reward: HK $2000
Poor Calvin, maybe he shouldn’t handle money! A thief jumps him and takes the Night Market money as you come onto the scene. Chase him down, disable his vehicle and break his face.

Junk in the Trunk

There are four Junk in the Trunk events, and they become available after the ‘Loose Ends’ mission. In a nutshell, go to the cars with people stuck in the trunks, free them, profit.

Junk in the Trunk: Waterfront
Location: North Point, in the shanties south of the waterfront
Reward: HK $2000
This poor woman is a kidnapped nurse, held for ransom, and is very grateful for being freed.

Junk in the Trunk: Island
Location: Aberdeen Island
Reward: HK $2000
This time it’s a doctor about to go sleeping with the fishies for antagonizing the 18k.

Junk in the Trunk: Central
Location: Central, the park near the hospital
Reward: HK $2000
This one is slightly hidden behind a set of stairs leading up to the walkway, but be prepared for a fight, because this guy comes out fists-a-swingin’. Knock him out to complete the event. Try using the trunk of the car for irony points.

Junk in the Trunk: Repo Yard
Location: Central, on the highway construction site east of Sui Shan Alley
Reward: HK $2000
The last car is near a red gate on the construction site. But this chick isn’t exactly a victim..