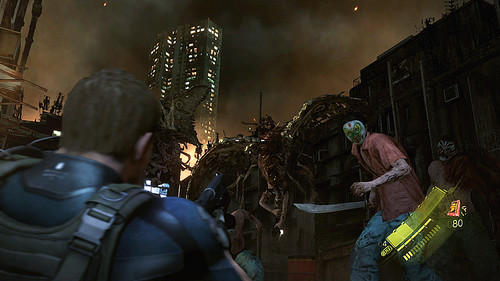 Prepare yourselves to face a zombie apocalypse once again, as Resident Evil 6 takes us back to the classical urban regions filled with conventional undead and similar horrors.

Neglecting the necessities of food and water (which aren’t your primary needs in most games), the single most important thing during a virtual zombie apocalypse is the arsenal of weaponry available to you.

The Resident Evil series has been famous for its lovable weapons, ranging from the classic Survival Knife all the way to the deadly Magnum handguns. This guide provides you with a list of all weapon types available in Resident Evil 6.

Knife
Be it Leon, Ada, or Chris, the Knife has proving itself to be the most trustworthy tool, particularly for those moments when you are low on ammo (which happens more often than not in RE games) or when you have to finish off an enemy who you’ve already created orifices in.

Hand-to-Hand
Jake Muller introduces an alternate melee weapon to the knife: his CQC skills. His moves can be charged up to do additional damage, and are reminiscent of Wesker’s in Resident Evil 5’s Mercenary Mode.

Stun Rod
Jake Muller isn’t the only one who has something different to offer. His partner Sherry Birkins introduces the Stun Rod, which like Jake’s moves can also be charged up. Additionally, the second strike has the ability to do multiple hits (like the knife in Resident Evil Code Veronica).

Wingshooter:
The Wingshooter is Leon’s starting handgun weapon, and can be duel-wielded. The secondary Wingshooter can only be reloaded when it is deployed.

Picador
This is Helena’s standard handgun that can fire as fast as one can pull the trigger.

Nine-O-Nine
The iconic 909 is the standard fire-arm for Chris Redfield and Jake Muller.

Triple Shot
The Triple Shot is a handgun used by Sherry that can do single shots or 3-round bursts.

Hydra
The Hydra shotgun is a special 3-barrel shotgun that is owned by default by Helena. Its speed is also limited by how fast the trigger can be pulled, but you might want to take into account the reload time.

Shotgun
The standards shotgun is a pump-action 12 gauge weapon. It’s powerful at close range, but slow because of the pumping action.

Assault Rifle
The Special Tactics Assault Rifle made for SpecWars Operators is loosely based on the H&K G-36. It is available in Chris’s inventory by default.

Bear Commander
The Bear Commander is an assault rifle that greatly resembles the M4 Carbine. In addition to its automatic firing, it has a secondary fire mode that its grenade launcher attachment.

MP-AF
The machine pistol weapon used by Piers Nivan has an extended magazine to accompany a large ammo capacity. It has the capability to fire single rounds or fire in full automatic. It uses handgun ammo, which makes it less powerful than Assault Rifles, but much more usable.

Sniper Rifle
The Sniper Rifle is a standard scope-rifle used by Jake and Sherry, and is their main precision rifle.

Anti-Material Rifle
The Anti-Material Rifle is a powerful sniper rifle owned by Piers. It has the ability to pierce through enemies, and also boasts a Thermal scope. Don’t expect it to penetrate through any type of wall or object though.

Elephant Killer
The powerful Elephant Killer is a representation of the infamous Smith and Wesson .500 S&W Magnum, which is the world’s most powerful handgun. This badass Magnum weapon’s name is enough to give an idea of its capabilities.

Lightning Hawk
The Lightning Hawk is a powerful Magnum weapon that is found in both Leon’s and Chris’s campaigns.

Crossbow
Ada Wong brings back the Crossbow in Resident Evil 6. Unlike the one in RE4, this Crossbow uses standard non-explosive arrows that can pierce through multiple enemies and knock them down. However, variations in the ammo type are also evident.