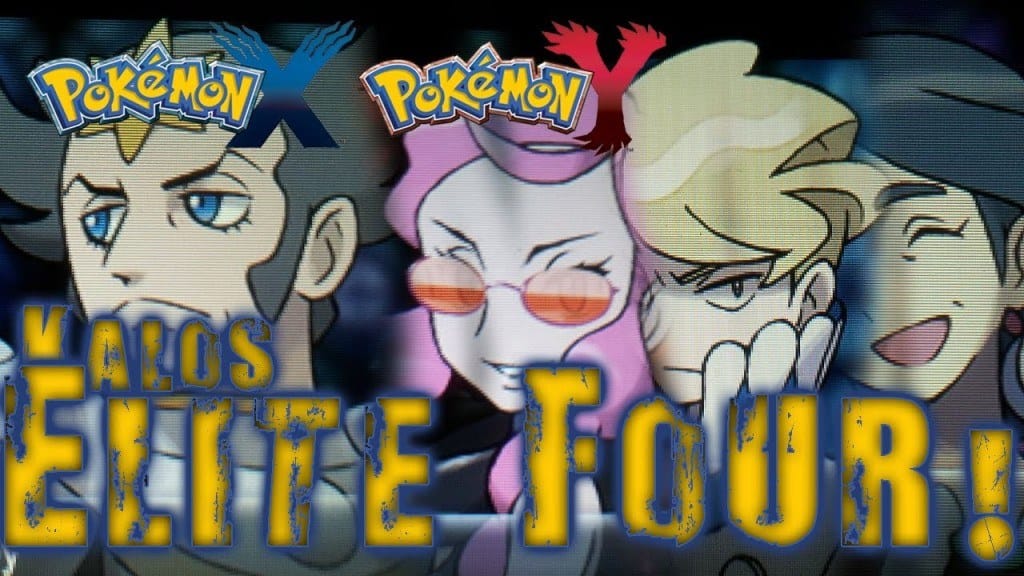 In Pokemon X and Y, Elite Four are the best four Trainers in Kalos Region. They can be accessed in the Pokemon League to the east of Santalune City. However, you will need to collect all eight Badges before you can reach them.

The game allows you take on them in any given order and have a re-match at any given time. These four Trainers are:

After defeating the trainers, you can take on the Champion Diantha.

Malva will be in the top-right option that uses Fire-Type Pokemon.

Pyroar (Level 63)
Pyroar has 70 Base Happiness and is transformed from Litleo at Level 35. The abilities that Pyroar has are:

Rivalry
It increases the Basic Attacks and Special Attacks damage by 50% if the opponent is of same gender and decreases it by 25% if it is of different gender.

Unnerve
It will NOT allow opponent Pokemon to use their Berry while the battle is going on.

Torkoal (Level 63)
It has Base Happiness of 70 and Experience Growth of 1,000,000 Points. The abilities at its disposal are:

White Smoke
The abilities which slow down this Pokemon’s abilities have no effect anymore.

Shell Armor
Enemies will NOT be able to deliver Critical Hits.

Chandelure (Level 63)
Chandelure has a Base Happiness of 70 and Experience Growth of 1,059, 860 Points. It is transformed from Litwick at Level 41. The abilities at its disposal are:

Flash Fire
This increases the damage of Fire-Type Attacks by 1.5 times and makes it immune to all Fire-Type abilities.

Flame Body
This will allow you to have 30% increased chances of inducing enemies with BURN while using an attack.

Shadow Tag
This ability will allow you to trap a Pokémon. The enemy Pokémon will NOT be able to switch or evade the area.

Talonflame (Level 65)
It is transformed from Fletchling at Level 35 and has a Base Happiness of 70. Ability at its disposal is:

Flame Body
This will allow you to have 30% increased chances of inducing enemies with BURN while using an attack.

Wikstorm wears a steel suit and uses Steel-Type Pokemon. You can find him in the top-left option. The Pokemon at his disposal are:

Klefki (Level 63)
Klefki has a Base Happiness of 70 and the ability at its disposal is:

Prankster
Speed Priority of Status category is enhanced by 1.

Probopass (Level 63)
This Pokemon has a Base Happiness of 70 and Experience Growth of 1,000,000 Points. The abilities of this Pokemon are:

Sturdy
Sturdy makes this Pokémon immune from the One Hit Knock Out attacks.

Magnet Pull
This ability restricts the ability of Steel-Type Pokémon of running and switching.

Sand Force
The power of Ground-Type, Rock-Type, and Steel-Type is increased by 33%.

Scizor (Level 63)
This Pokemon has the Base Happiness of 70 and Experience Growth of 1,000,000 Points. The abilities are:

Swarm
The power is increased when this Pokémon is running low on HP.

Technician
This allows the movement with a Base Power of 60.

Light Metal
This allows the weight reduction by 50%.

Aegislash (Level 65)
The only ability at this Pokemon’s disposal is that it is able to change itself depending upon the situation of the battle.

This woman is the bottom-left option and uses Dragon-Type Pokemon during the battles.

Dragalge (Level 63)
It is transformed from Skrelp at Level 48 and has a Base Happiness of 70. The abilities of this Pokémon are:

Poison Point
This ability allows you character to induce the enemy with Poison by 30%.

Poison Touch
Melee Attacks have 20% more chances of injecting Poison in the enemies.

Altaria (Level 63)
It is transformed from Swablu at Level 35 and has a Base Happiness of 70 with Experience Growth of 600,000. Its abilities are:

Natural Cure
Statuses like Sleep, Poison, and Freeze are cured with this ability.

Cloud Nine
It renders all the weather effects useless.

Druddigon (Level 63)
The abilities of this Pokémon are:

Sheer Force
Moves which have a secondary effect get 33% enhanced power.

Mold Breaker
It renders the effects of other enemy attacks to minimal, thus; reducing damage.

Rough Skin
The enemies are damaged by 1/16th of its maximum Hit Points.

Noivern (Level 65)
It is transformed from Noibat at Level 48.

Frisk
Your Pokémon will be able to see the items that enemies are holding.

Infiltrator
The protections and stat boosts by the enemies are useless.

Siebold is the bottom-right option and uses Water-Type Pokémon during the battles.

Clawitzer (Level 63)
It is transformed from Clauncher at Level 37.

Mega Launcher
The power of Pulse Attacks is increased greatly.

Illuminate
Your Pokemon will have more chances of meeting wild Pokemon.

Natural Cure
Statuses like Sleep, Poison, and Freeze are cured with this ability.

Analytic
This ability allows your Pokemon to increase by 30%.

Gyarados (Level 63)
This Pokemon has the Base Happiness of 70 and Experience Growth of 1,250,000 Points. The abilities of this Pokemon are:

Intimidate
It decreases the enemy Attack stat by 33%.

Moxie
After taking out enemy Pokemon, Attack is increased by one stage.

Barbaracle (Level 65)
Binacle is transformed into Barbaracle at Level 65. The abilities of this Pokemon are:

You will meet her in a cafe in Lumiose City. She is a Pokemon League Champion and is one of the toughest opponents in Kalos. When you fight her with your Pokemon, know that she will leave Gardevoir last and it will always Mega Evolve.

Hawlucha
It has a base happiness of 70 and has following two abilities:

Limber
Pokemon cannot be paralyzed while having this ability.

Unburden
Speed is doubled once the held item is consumed.

Tyrantrum
It has a base happiness of 70 and can evolve at level 39. It has the following ability:

Aurorus
It has a base happiness of 70 and can evolve at level 90. It has the following ability:

Gourgeist
It has a base happiness of 70 and can evolve. It has following abilities:

Pickup
With this ability, there is a 10% chance of finding and holding an item after battle.

Goodra
It has a base happiness of 35 and can evolve. It has following abilities:

Sap Sipper
Whenever you hit the Pokemon by grass-type move, it will raise one stage and user will receive no damage from grass-type attacks.

Gardevoir
It has base happiness of 35 and experience growth of 1,250,000 experience points and can evolve. It has the following abilities:

Trace
With this ability, special ability becomes as that of the opponent. To restore its original ability, you will have to take the Pokemon out of the battle. In a double battle, a random opponent’s ability will be copied.

Telepathy
It’s a hidden ability which prevents damage from team-mates during Double and Triple battles.

Have we missed out on anything? Do let us know in the Comment Section below!