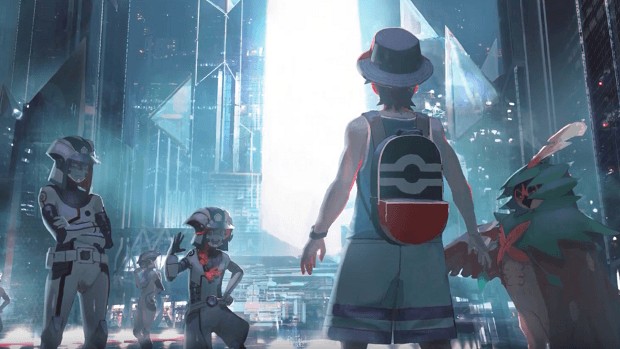 In Pokemon Ultra Sun and Moon, the way of acquiring a Null Pokemon has changed and we have detailed it below.

For more help on Pokemon Ultra Sun and Moon, read our Moon Dusk Lycanroc Guide, How to Date Nurse Joy, Pokemon Refresh Guide and Using it to Raise Affection.

Type-null is Normal-type Legendary Pokemon that is new to the Generation VII in the USAUM. It is a phoenix-type creature, genetically engineered and crafted out of traits from different Pokemon.

Its head is covered with a helmet-like object that was made to suppress its unfathomable power. The helmet has protrusion over the jaw area that stretches the back of the head with round hinges on both sides covering the ears. These hinges having green engravings shaped like a cross. Inside the helmet, through the holes, small grey bewitching eyes are visible. Over the helmet, a sharp ax-shaped projection points to its tale. A mane seemingly originating from that ax follows down its neck and cover all sides of its neck. The front two feet are bug-like and the tail imitates a fin from a fish-type Pokemon.

The Pokemon evolves in Sivally that is also a Legendary Pokemon. however, this transformation can only be achieved by increasing its happiness.

Silvally is the evolved form of the Null-type. It is also a Normal-type legendary Pokemon with a much more radiant and beautiful outlook than its predecessor.

This evolution, however, can only be made possible by maxing out its happiness. This transformation is nearly identical to its pre-evolution form. The difference is that the metal helmet is removed and the eagle-like face with a lustrous metallic snout is revealed. Its fur changes from grey to silver adding to the magnificence of the creature.

How to Capture Pokemon-Type Null

To capture a type-Null Pokemon you need first to have ended the main story-line, beat the elite four and become the champion. After having done so, you need to Aether’s Paradise on Poni Island. Proceed inside and you will see a find yourself inside a white room and from there on you need to climb up to the second floor of the building through the elevator in the middle of the room. The elevator is right in front of the entrance, a triangle shaped enclosing that has the control box on the far corner. Mingle with it to proceed to the Conservation Area.

You must also be on the Ultra Beast mission. Once these conditions are met, when you reach the entrance of the Poni Grove a cutscene will start. Gladeon will chat with you for a while and then offer you the type-null, “not as an apology or a gift”.

Important Note: now the thing is that the Type-null that Gladeon offers is of varying type. Each one is different in every turn. For instance, one might be of a Jolly Nature and have high sp. speed and speed stat, while another would have a Rude nature corresponding to high attack and ap. attack stat. So, before you proceed to talk to Gladeon, make sure you save the game as the type-null you get might not be the one you would prefer. This way if you do not get a Pokemon of your preference, you can soft-reset and get another one.

Make sure you have beaten the Pokemon League and started the Ultra Beast mission before coming here otherwise the cutscene will not start.

How to Evolve Pokemon-type Null into Silvally

The question how to raise Pokemon-type Null happiness is answered in-depth in this video which will also help you evolve it into Silvally:

In Pokemon Ultra Sun and Moon, Pokemon-type Null is:

Is okay when it comes to:

This concludes our Pokemon Ultra Sun and Moon Null Pokemon Guide. If you want to add anything to this guide, feel free to use the comments section below!