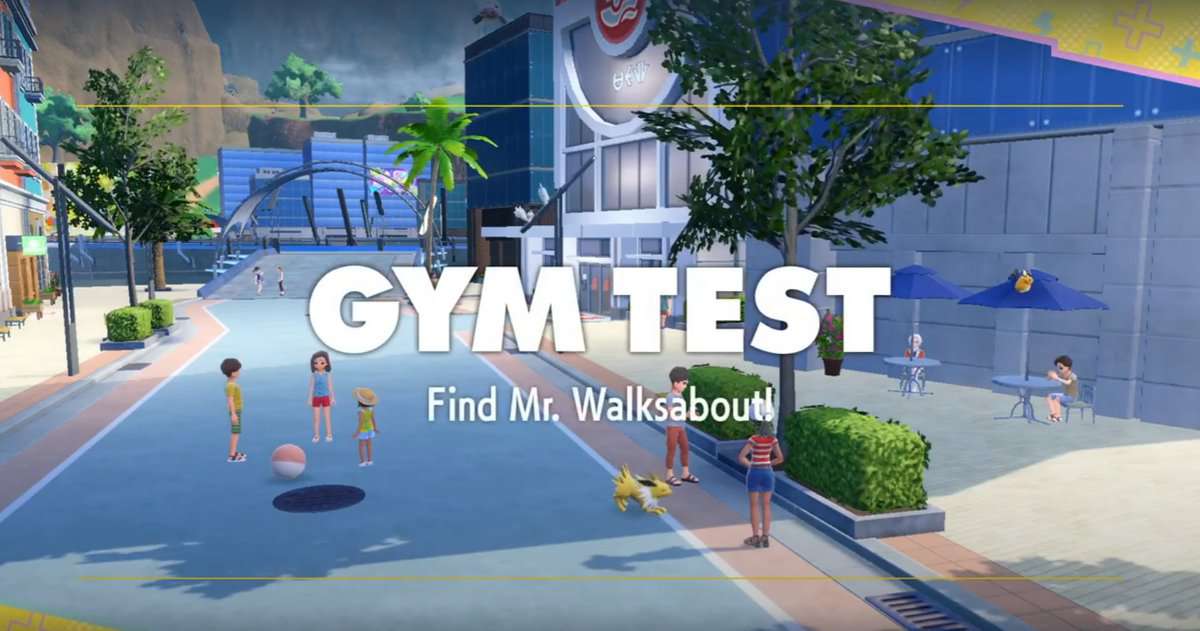 Levincia is a big city just north of Artazon in Pokemon SV that houses its own electric-type gym. Here you will find electric-type Gym leader Iono. You should enter this Gym after getting two badges because you can fight Nemona before starting the test.

After dealing with Nemona, you can head to the receptionist and start the Levincia Gym test you will need to complete before fighting with Ionoin Pokemon SV.

After talking with the receptionist, you will head out, and Iono will introduce you to the world. Here you also get to meet Mister Walksabout.

To complete the Levincia Gym challenge in Pokemon Scarlet and Violet, you must spot him in three images and fight with some trainers. So let’s start with the challenge solution so you can quickly complete it and fight the Iono for the Gym badge.

In the first image shown to you, Mister Walksabout is sitting in the eating area and trying to hide behind the pole.

Once spotted, you will encounter a Gym Trainer that uses Luxio in the fight. You can take out Luxio using any Ground Type Pokemon.

In the second image, you can spot him at the counter of the Pokemon Center. This time, you have to face a Gym Trainer with Tynamo and Flaafy. Both are electric types, so you can also use Ground Type Pokemon to defeat them.

In the third image, Mister Walksabout stands on a boat. He is too small in this, but if you look at the middle right edge of the image, you can spot him.

After that, you will pass the test and go up against Iono; all you have to do is get to the Gym and talk to the receptionist.

How to defeat Iono in Pokemon SV

Iono will use four Pokemon during her battle inside Levincia gym in Pokemon Scarlet and Violet. She uses mainly the electric Pokemon, but you can’t defeat her just by using the Ground type Pokemon, which are strong against the electric type.

To defeat her Pokemon, you need to diversify your team and choose the right ones to tackle all of its Pokemon. Below are her four Pokemon in the order she will use them.

Wattrel is her first Pokemon, but you can’t just take it out using the Ground Type Pokemon. It is also a Flying type that is immune to ground-type Pokemon.

So to deal with Wattrel, you will need to have Rock or Ice-type Pokemon. However, the second and third Pokemon of Iono are entirely electric, so you can take them out using the Ground-type Pokemon.

The fourth Pokemon of Iono is Tera Mismagius, a ghost-type Pokemon. After getting Terastallized, it can levitate, which increases its immunity against most types.

So the only tactic you can follow to take out Mismagius is a higher-level Pokemon. Therefore, we recommend you bring in Pokemon close to level 30 to deal extra damage.

You should be ready to sacrifice some of your Pokemon to take out the Mismagius. After getting hit by the Confuse Ray attack, things can get tricky, so you need backup.

You can also use some Persim Berries to counter the Confuse Ray attack of Mismagius in Pokemon Scarlet and Violet. Avoid sending Electric, Flying, and Ground type Pokemon if you want to take out Mismagius quickly.

Levincia Gym Leader Iono will use the following four Pokemon in the battle against you.

The Pokemon below are best to counter Gym Leader Iono Pokemon. But as far as defeating Mismagius is concerned, you will need to use your most powerful moves to take it out.

It has no weakness, so only using a high-level Pokemon and its best moves is how you can tackle him in Pokemon Scarlet and Violet.

You will get the following rewards for defeating Levincia Gym Leader in Pokemon SV.

Volt Switch is an electric type move that you can use on a Pokemon, and right after that, swap the current Pokemon with the other one in your party.