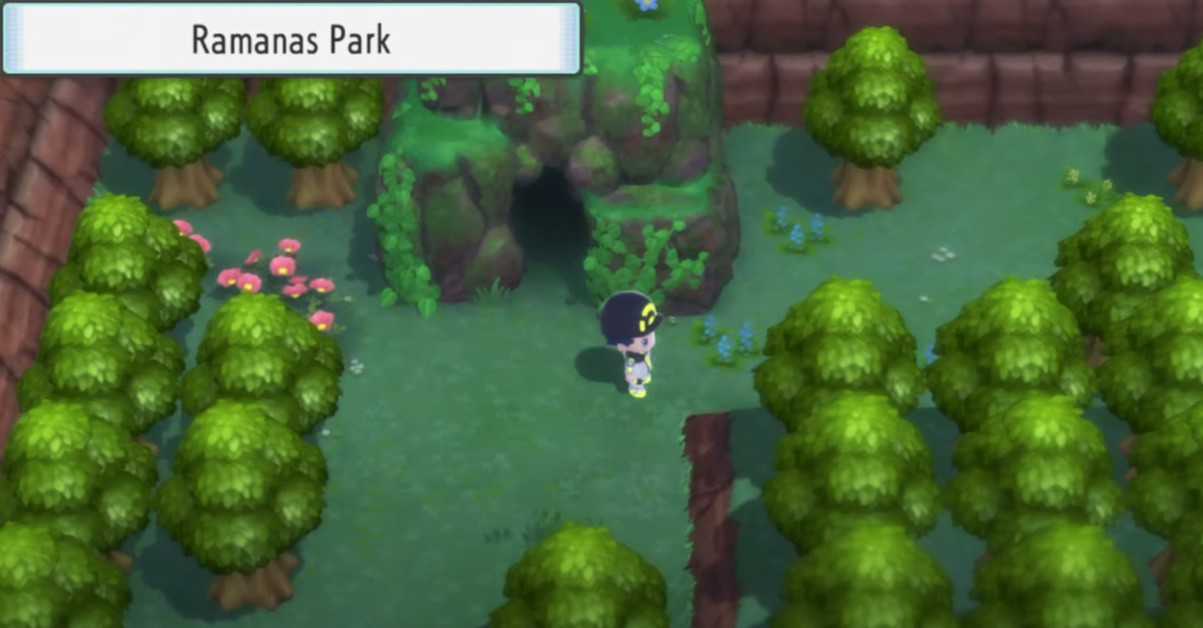 Let’s start out with a brief description of what Ramanas Park is. Do you remember Pal Park? Well back when Diamond & Pearl were first released, we had a feature known as Pal Park.

Previously you would visit Pal Park to transfer Pokemon from previous titles like FireRed, LeafGreen, Ruby & Saphire to Diamond and Pearl. Long story short, Pal Park is now replaced with Ramanas Park which serves a higher purpose than its predecessor.

In Ramanas Park you are able to encounter Legendary Pokemon from previous generations through the use of certain Slates.

Within the park, you will find mysterious caverns that will lead you to machines where you can use these slates. These slates can be used to summon the legendaries from other regions and previous generations of Pokemon games.

Unfortunately, Ramanas Park in BDSP is only unlocked for you late within the game. Well, it won’t be fair for the Elite Four if you show up with a party filled with Godlike Pokemon.

After you have defeated the Pokemon League and become the Champion of Sinnoh, head to Route 221 to reach Ramanas Park. You will need Surf to reach the area.

Remember to stock up on Pokeballs of your choice before facing these powerful Pokemon if your intention is catching them and not simply defeating them.

However, if you don’t find anything amusing about these Pokemon and you’re there for the sake of unlocking Ramanas Park only, then you can simply see all of the Pokemon and this will get the job done for you.

As there are exclusive Pokemon in both versions of the game, Ramanas Park also has limitations to which Legendary Pokemon you will find within it.

Both Brilliant Diamond and Shining Pearl versions of the game will have exclusive legendaries waiting for you in Ramanas Park.

In Brilliant Diamond, you will be able to encounter the following Pokemon:

In Shining Pearl, you will be able to encounter the following Pokemon:

These Pokemon can be encountered in both versions:

But remember when we pointed out how some Pokemon can only be triggered through the use of a Slate? Here is a brief rundown on what a Slate is.

How to Get All Legendary Slates

In Ramanas Park you will happen upon a number of rooms with pedestals. Each room will have a respective Slate that a pedestal corresponds with. Activating a pedestal with the right Slate will summon a Legendary from the past titles.

With each specific slate that you summon, you’ll be led to a fight with a specific Pokemon. The Pokemon can then be defeated or captured.

Legendary Slates bring about all kinds of legendary Pokemon and add a lot of excitement to the game.

However, Slates aren’t free. They have to be bought using mysterious shards. Mysterious Shards can be mined from the Grand Underground.

Visually, the slates are a humble nod to Gameboy and Gameboy Advance cartridges. The color of each will resemble the color palette of the legendary that it’s linked with.

The following are some of the confirmed slates in-game:

Apparently, all of the slates will not be available when you first begin with the game. The only available slate in the beginning is the Discovery Slate.

The next Slate that you’ll unlock is the Kanto or the Johto Slate after you’ve captured all of the Pokemon summoned by the Discovery Slate.

Keep catching all of the Pokemon a particular slate summons to unlock the next slate. The last slate on our list is unlocked when you capture Giratina in Turnback Cave.