Breeding in Pokemon games has long been used to get offspring with more desirable stats and natures in order to create the best party. The breeding feature makes a return in Pokemon BDSP and our guide will go over all the details of the Pokemon breeding mechanics in Brilliant Diamond and Shining Pearl.

How to Breed in Pokemon BDSP

Trainers can breed stronger Pokemon in Pokemon BDSP by using Dittos with High IVs and Everstones to hatch eggs.

We will be talking about all of that in detail in this guide as well as any complications or special items needed to hatch certain Pokemon in Brilliant Diamond and Shining Pearl.

In Pokemon BDSP, you can use different items to enhance the Pokemon you breed and make them even better. We will explain the features of each item below:

So if one of your Pokemon has a nature you wish the offspring to have as well, you will need the Everstone to pass down that nature to the offspring when breeding.

You can get Destiny Knot from Route 224 and Everstones can be traded by talking to an NPC in Snowpoint City. You can find him in the northwest part of town, chilling inside his house.

How to Breed Perfect IVs or High IV Pokemon

Let’s take a look at how to check IVs and everything related to breeding with perfect IVs in Pokemon BDSP.

As we mentioned before, Destiny Knot is the key factor that determines the IVs for an offspring Pokemon. Since IV stats are randomized, the only way for you to get a pokemon with perfect IVs is by manipulating the breeding process with the use of Destiny Knot.

Keep breeding with Dittos or Pokemon with High IVs which will result in the offspring Pokemon also having decent IV values. Once you start getting offsprings with Fantastic or Very Good IV ratings, give the Destiny Knot to that offspring Pokemon and use that as a Parent Pokemon.

While the Destiny Knot itself adds a randomization factor to which IVs are selected, the fact that most of your IVs will be very high value should result in overall Pokemon IV to be Fantastic or Best.

You can check the IVs of a captured Ditto or other Pokemon by using the Judge skill. You can acquire this skill after you’ve completed the Pokemon League by going back to the Battle Tower and talking to the NPC, standing on the right side. 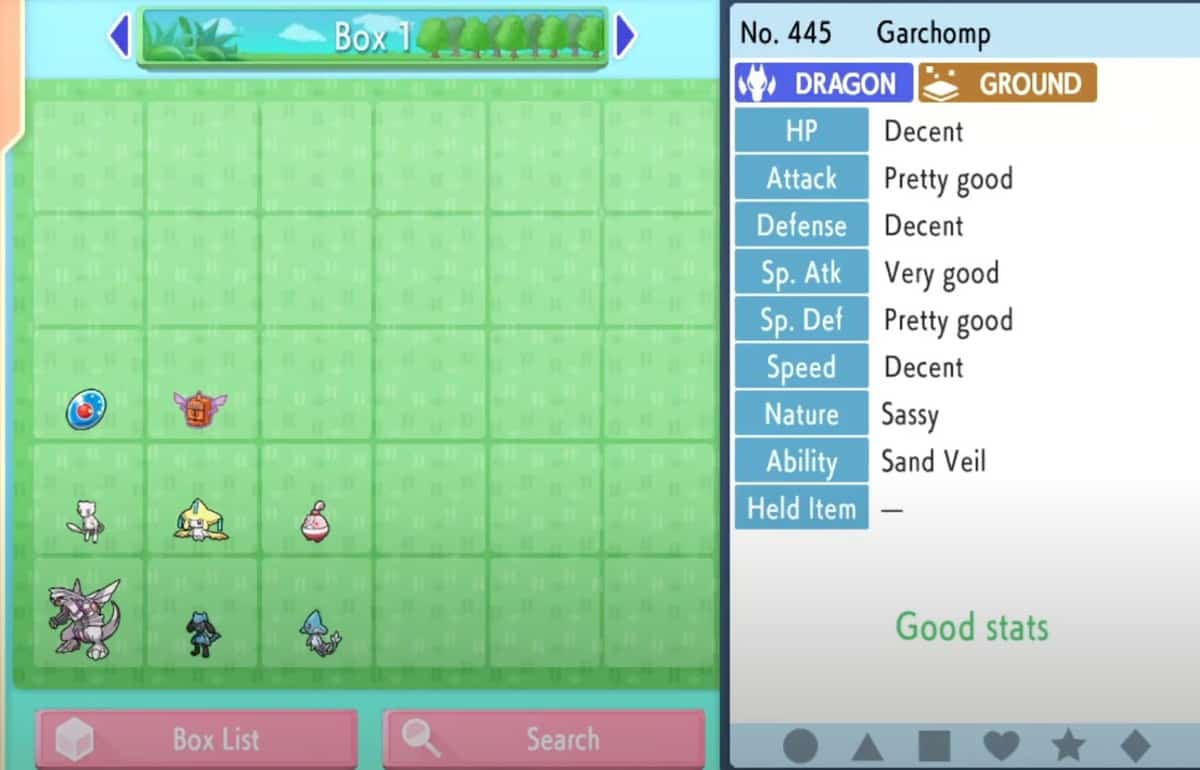 This NPC will teach you how to use Judge; the skill required to look at each Pokemon’s stats. The 6 basic stats (HP, Special Attack, Special Defense, Speed, Attack, Defense) in Pokemon BDSP are divided into 6 categories which are:

‘Not Good’ being the Worst & ‘Best’ being well…THE BEST. A Pokemon having Best IVs would mean that its stats have a score of 31, which is the highest it can be.

You can check your current Pokemon’s IV by heading to the Box screen and pressing the + button on your controller.

How to Breed with Dittos in Pokemon BDSP

To make things easier, we recommend using Dittos for breeding as a Ditto can get along with any Pokemon and breed with them. This makes the process a lot easier and all you have to do is find Dittos with High IVs

Once you’ve acquired Dittos with High IVs, you need to head over to the Pokemon Nursery in Solaceon Town and leave the parent Pokemon along with any items like the Everstone and the ditto with the lady at the counter.

You need to spend some time doing other activities while the egg gets ready. You can track the progress of the egg from the Nursery Checker app. Once it is ready, go and collect it from the lady sitting at the counter.

The acquired egg will take up 1 slot in your inventory and now you have to wait for it to get ready.

Here are two tips to help you hatch the egg as quickly as possible:

Keep walking until the egg is ready to hatch and check if the offspring has the required IVs and nature. You can repeat this process until you get the ideal Pokemon offspring.

How to Pass / Transfer Egg Moves in Pokemon BDSP

In Pokemon BDSP, there are certain movesets a Pokemon can only learn via Egg Moves. Egg Moves allow the Pokemon to learn a given number of skills from their parent Pokemon.

There are a set of rules around this mechanic and that’s what we’ll be discussing below to help you breed efficiently for Egg Moves in Pokemon BDSP.

These are essentially the moves a Pokemon learns through breeding and some Pokemon have rare movesets that cannot be unlocked by normally leveling up that Pokemon. To breed for egg moves, you first need parent Pokemon that already know egg moves.

To teach a Pokemon egg moves, you need to bring two Pokemon of the same species to the Pokemon Nursery in Solaceon Town where one Pokemon knows an egg move and the other (yours) doesn’t.

Leave them both at the nursery and step outside for a minute or two then go back in and your Pokemon will have learned a new egg move.

Just make sure your Pokemon has an empty slot to learn new egg moves otherwise the process will fail and you will have to visit the Move Deleter, found in Canalave City to free up your Pokemon’s slots.

How to Transfer Egg Moves

Once you’ve got a Male Pokemon with an Egg Move, you are ready to breed for egg moves but here are some of the rules you need to follow:

Do note that any moves you forget can be learned again by visiting the Move Reminder in Pastoria City. He is located northeast of the waterfront, next to the Poke Mart.

There are a few Pokemon in Pokemon BDSP that require special items to be able to breed and produce eggs. We will be creating a table below which lists these Pokemon and their required special items.

These Incense need to be held by the parent pokemon before you can use them for breeding.

Since some Pokemon in Pokemon BDSP require special incense items to be held in order to breed, we’ve listed the different types of incense along with their locations below.

Full Incense holder will always attack last. You will find this in Veilstone City on a platform on the eastern side of the gym. You will require Rock Climb TM100 to get this.

This will lower the chances of a critical hit by enemies by 5%. You can attach this to the female Wobbuffet and breed to get the Wynaut.

You will find it on Route 225 on the west side of the house and requires Cut TM93.

When this is equipped to a pokemon in the party this will double the amount of reward. You will find this in the Ravaged Path in the north end of the cave. You will need the Surf TM95 and Rock Smash TM 98 to get this Incense.

Odd Incense will increase the power of Psychic attacks. You will find this in the Soaceon Ruins inside the final room.

If this was attached to the first Pokemon of the party it will lower the encounter rate of wild Pokemon. You will find it on Route 221 on the west side of the level item house.

This Incense will increase the power of Rock attacks. You will find it in the Fuego Ironworks at the bottom right area of the interior among the spinning pads.

This Incense will increase the power of Grass attacks. You will find it inside Route 212 in the west of the Pokemon Mansion. You will need the Surf TM95 to get this Incense.

You can attach this Incense to a female Marill and breed to get the Azurill. This will increase the power of water type moves by 5%.

You can find this on Route 204 southwest corner. You will need the Surf TM95 to get this Incense.

Wave Incense will increase the power of water-type attacks. You will find this at Route 210 under the third bridge and need the Surf TM95 and Waterfall TM99 to get the Incense