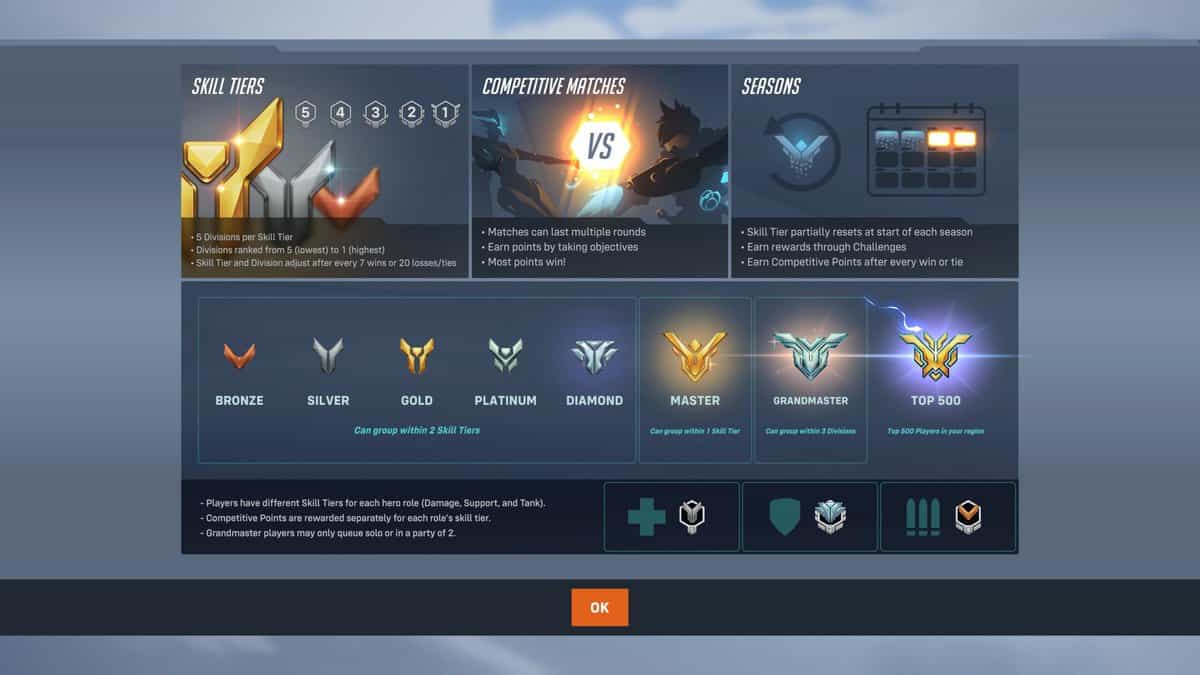 Overwatch 2, brings in a ton of changes to make the gameplay experience more enjoyable. In particular, the Ranking System of Overwatch 2 is changed quite a bit. So, you might be confused at first; to clear up things, we have compiled this guide to help you understand the OW2 Ranking System.

Overwatch 2 Ranking System is a whole new concept than what was incorporated in the previous iteration of Overwatch. Not only are the requirements to play ranked changed now but also new rank tiers as well as the number of matches required for placements.

How to unlock the Competitive mode in Overwatch 2

The ranked mode has received several changes to its user interface, divisions, tiers, and how you are awarded skill points to either increase or decrease your skill rating in Overwatch 2.

However, before jumping into a ranked queue, you will need to first unlock the Competitive mode itself.

Returning Overwatch Players who had unlocked the Competitive mode in the first game by reaching level 25, will automatically have access to ranked play in Overwatch 2 from the get-go.

You can start playing ranked games from the first day with your friends and family (or solo) without having to jump through any hoops.

For new Overwatch 2 players, there are a few requirements that you need to fulfill to unlock Competitive play in the sequel.

You first need to complete the First-Time User Experience (FTUE) which serves as a lengthy tutorial. Each level of FTUE will introduce you to one core mechanic of Overwatch 2. You will not only get a feel and understanding of how to play the game but also get to unlock 32 heroes from the first Overwatch game. This will take you around 150 matches.

Your next step after finishing the FTUE will be to win 50 Quick Play matches. This will provide newcomers the time to prepare and set their hands for Competitive play while allowing veteran players to compete with experienced players like themselves.

How does Competitive rank work in Overwatch 2

The competitive mode is completely different from what you saw in the original Overwatch. For starters in the new Overwatch 2 rank system, you will not be assigned a rank straight away based on your previous rank OW rank.

Overwatch 2 Competitive play will assign you rank only when you have at least 7 wins or 20 losses. Furthermore, the SR has also been removed from the scene, and you will no longer be evaluated based on a single match.

Instead, you will only be promoted or demoted in the ranks after 7 wins or 20 losses. The idea is to evaluate a player based on his consistency rather than his performance in a single match.

Overwatch 2 competitive play has to offer two different rankings one for the Role Queue and the other for the Open Queue.

In OW2, the Role Queue has a sort of pre-made team composition and you’re restricted to it. It limits you to one tank, two damage, and two support.

In Role Queue, you have the option to select the roles you want to queue for and play matches to receive an individual rank for each role.

In OW2, the Open Queue doesn’t limit you to any team composition. Instead, you can choose whatever class you want and compete in matches.

In the Open queue, you can choose any hero you want and win matches to receive a Universal Ranking.

On top of the player count changes, the SR system from Overwatch is also completely removed. In its place, players in OW2 now advance through different rank tiers and skill divisions. Experienced FPS players might have seen a somewhat similar system in Riot’s Valorant.

Here’s the breakdown of the Skill Tiers and Divisions in Overwatch 2 competitive.

Apart from the Grandmaster, there is the Top 500 rank that includes the top 500 players from a particular region.

Players from rank Bronze to Diamond can group up with others as long as they are within 2 tiers of each other. Master-rank players can queue up with friends who are within 1 tier of each other while Grandmasters are restricted to playing with those within 3 Divisions.

Since OW2 has more emphasis on consistency, it also features a Decay Mechanic that will make your rank go down over time if you’re on a break from OW2.

So, when you get back to the game you’ll start on a lower rank that will help you get back on track if you’re rusty. Also, since you’ll have the same skill level, you can progress up the ranks fast.

How to rank up in Overwatch 2

To get to higher ranks, one needs to have consistency and patience. You either need to win 7 matches or lose/ tie 20x matches. Although this will work really slowly but your rank will go up for sure.

Ideally, to rank up, players should be winning all 7 of those matches. In that case, they will gain 1-2 ranks after each update. However, since that is a difficult task, try to get as many wins as you can.

Keep in mind that individual performance matters too and the key to ranking up isn’t just about winning. If you are getting carried by your team, you won’t rank up as much as others even after 7 wins.

Try to get a group of like-minded friends going for competitive. Friends who can play a variety of characters and synergize well with others go a long way in securing those wins and ranking up.

In Overwatch 2, you’ll receive Competitive Points (CP) for your wins and draws and the highest skill tier.

These OW2 Competitive Points can be used to unlock Golden Weapons for old heroes and the newly introduced characters: Kiriko, Junker Queen, and Sojourn.