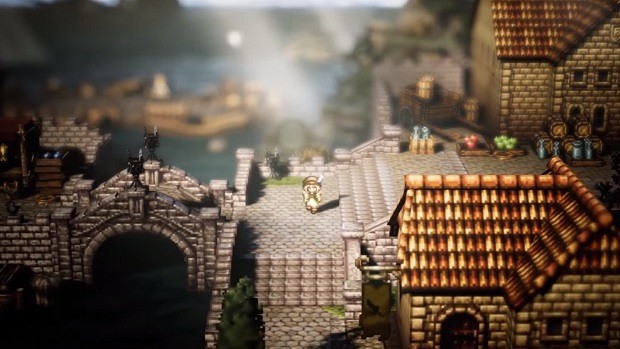 Our Octopath Traveler Jobs Guide will look at all of the ways in which the job classes are different from one another and what their skills are.

How to Unlock Octopath Traveler Jobs

You can unlock secondary job classes if you want by progressing through the second chapter of the story. Members of your party will be able to take on a second job class and gain new attribute bonuses and unique skills.

There are certain restrictions such as two characters cannot have the same job class and secondary jobs do not have Path Actions and Talents.

Let us go ahead and look at each of the job classes individually to see how they are different from one another. We will first look at a brief description of the class followed by the skills.

A thief can use physical attacks and skills to weaken enemies. Theron takes his start as a thief and you will have swords and daggers to equip with this class. You can steal items from enemies but if you are caught, you suffer a loss in reputation. However, anything that you manage to steal is free for you to keep.

Steal
SP Cost: x
You can steal an item from the enemy.

Wildfire
SP Cost: 7
You do a lot of damage to an enemy.

Armor Corrosive
SP Cost: 4
You reduce the defense strength for 2 turns of an enemy.

Steal SP
SP Cost: 6
Attack an enemy 2 times with a dagger and get 5% of the damage dealt as SP.

Share SP
SP Cost: 0
Give half your SP to an ally.

Aeber’s Reckoning
SP Cost: 30
This Divine skill attacks all enemies with the dagger and deals damage relative to your speed.

Heal Wounds
SP Cost: 8
All allies are given HP.

Holy Light
SP Cost: 6
Small amount of damage is inflicted on an enemy.

Luminescence
SP Cost: 9
Small amount of damage to all enemies.

Aelfric’s Auspices
SP Cost: 30
This divine skill gives one ally to trigger each skill twice for the next 3 turns.

Hunters can use Bows and Axes to deal damage. H’aanit will start as the Hunter class. Hunters can also allow you to challenge other creatures in combat using your own creatures that the Hunter class is able to hunt. Think of this like a Pokemon mini-game. You can tame creatures who you can then use to fight others.

True Strike
SP Cost: 10
A lot of damage is dealt to a single enemy with the bow.

Thunderbird
SP Cost: 7
Lots of damage to a single enemy.

Leghold Trap
SP Cost: 6
A single enemy will act at the end of your turn for 2 turns.

Arrowstorm
SP Cost: 24
Attack all of the enemies 5-8 times using your bow.

Warriors use swords and polearms to deal their damage. Olberic is the default warrior and his main purpose is to take damage for the team. Warrior can challenge anyone in town to get XP and unique items.

Level Slash
SP Cost: 9
All foes are attacked with a sword.

Incite
SP Cost: 4
You are attacked more often for 3 days.

Thousand Spears
SP Cost: 20
Random enemies are attacked by the polearm between 5 to 10 times.

Dancers use dark magic attacks to help their team. Primrose is the default dancer and Daggers are used for this job. Dancers can also allow you to recruit players to fight for you in battle. However, if you do end up losing then your reputation with the people of the town will suffer a fair bit, so you need to be quite careful.

Peacock Strut
SP Cost: 4
Elemental attacks of an ally are buffed for 2 turns.

Panther Dance
SP Cost: 4
Ally has an increase in speed for 2 turns.

Scholars use Staves to deal damage to multiple enemies at once. Cyrus is the default Scholar. This class can also talk to people in the towns to get more information that you need.

You will also get to know the vulnerability of an enemy before the game begins.

Analyze
SP Cost: 1
HP and weakness of a particular enemy is revealed.

Alephan’s Enlightenment
SP Cost: 30
This skill gives an ally the chance to deal intense single target damage instead of damage to all foes using its skills for 3 turns.

Merchants are used to getting money. Bows and Polearms do their attacks. The default merchant in the game is Tressa. Merchants can also force any person in a town to sell you their entire inventory for a price.

This means that you will have more options on what you can use to stock up for the fights and you will be able to find items and materials much more easily than you could before.

Collect
SP Cost: 2
Get money from an enemy.

Sidestep
SP Cost: 10
You can dodge a single physical attack.

Hired Help
SP Cost: 0
Hired help comes into the field, but you have to pay it.

Bifelgan’s Bounty
SP Cost: 30
A non-elemental attack on an enemy is performed and you receive money equivalent to the amount of damage dealt.

The main purpose of the Apothecary is to support their teammates using the right ingredients. The only weapon they have at their disposal are Axes and the default character who is an Apothecary is Alfyn. You can also use inquire to get a lot of information from the people who are in the towns.

This can be used for a multitude of actions and the class is perfect for people who like to wander around the towns and get information from the people.

Rehabilitate
SP Cost: 10
Cures all ailments of an ally and makes them immune for 2 turns.

Amputation
SP Cost: 8
You attack an enemy with your axe.

Empoison
SP Cost: 6
An enemy is poisoned for 2 turns.

Last Stand
SP Cost: 16
All foes are damaged with your ax. The amount is inversely proportional to the amount of health you have.

Dohter’s Charity
SP Cost: 30
Any item used by a chosen will affect everyone for 3 turns.

That is all we have for our Octopath Traveler Jobs Guide. Let us know if we missed something using the comments section below!