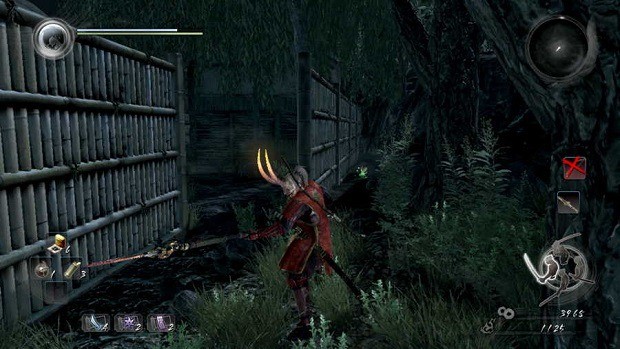 Our Nioh Immortal Flame Walkthrough will help you complete the mission and defeat all enemies in the area.

The mission basically tasks you to find multiple shrines and defeating new types of enemies before heading to the final boss. This is the mission during which you get to find a new Guardian Spirit named Suzaku

In our Immortal Flame Guide, we’ve detailed everything you need to know about completing the mission.

Finding the Next Shrine
After the cut-scene, pray at the Shrine and head left around it to come to a flamed-lined path. before you continue, turn back and run down to the end of the path. Behind one of the fallen rocks, you will find the first Kodama of the area.

Continue right through the large doorway to find the path ahead blocked by fire. Hug the left-hand side wall and continue right past the wall before heading left.

There are some enemies in the area so make sure to get rid of them.

Here, you can drop the barrel on the ledge to put out the flames. Behind on of the houses, the second Kodama can be found.

I recommend passing through the flames and ignore the little bit of damage that you get. Keep going forward. At some point you will see a Nurikabe on the wall on the right. After defeating him you can send away Kodama and unlock a shortcut next to the shrine.

From there, head left into the courtyard and head up the steps into a building. Defeat the enemy and head continue right to get to the next area. From the second shrine, you need to go into one of the two burning building, through the one on the left.

From here, go to the one on the right after facing a few Dweller enemies, then before you go down in the second building.

Look around the back side of the building to find another Kodama. In the courtyard that you just bypassed, another Kodama is hidden, surrounded by two wheelbarrow monks.

Pour water on yourself by dodging into the smaller barrels found here, and run through the fire. Defeat the monks and send the Kodama to the shrine.

Head to the top of steps and veer left from the top before heading down-right in an area with barrels.

Proceed through the next area while dealing several Skeleton Warriors and head left after getting through the doorway to find another Shrine.

Moving On
From the Shrine, you need to head right and head inside the house on the left-hand side.

After clearing the enemies, head up the stairs and go left down the hallway before heading out the door. On the other side of the entrance, you can unlock a shortcut to the shrine and find a Kodama.

Continue left and up the stairs to come across a Wheel Monk.

After coming the Wheel Monk, head left from the end of the path and then right down towards the Shrine on the right-hand side.

Continue along the path to come to the area where you fought the Skeleton Warriors. This is the shortcut mentioned before along the Kodama.

From the fire wall, head right and take the ladder up. From the top, head left and drop down to come to a new area.

After dealing with the enemies, head to the door on the far left-hand side of the area to unlock a shortcut.

Now open the double-door and head inside the structure. Once inside, follow the hallway and break the wall on the left-hand side.

After entering the new room, break another wall straight ahead and head down the hallway.

Defeat an enemy in the next room, break the wall, and head left out of the room. Now head down the hallway and head left up the stairs.

Once you’re at the top, head right and open the double-door on the right-hand side.

After dealing with the enemies, open another pair of sliding double-doors and you should be able to find the mission’s boss.

After dealing with the boss of the mission in order to trigger a cut-scene and earn the Suzaku Guardian Spirit.